Baby Yoda went along for the ride, as a “zero-g indicator.” 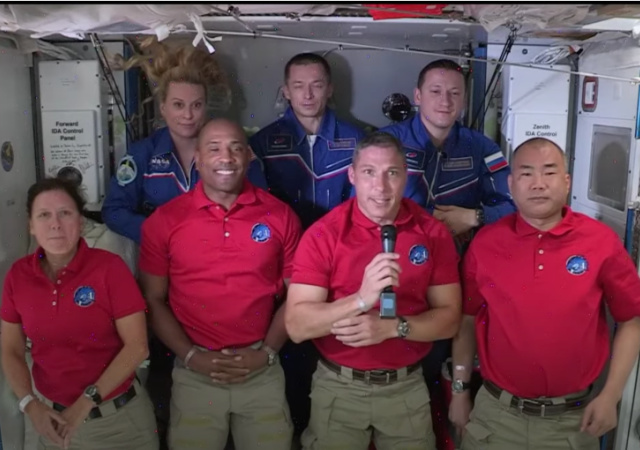 In May of this year, a SpaceX Dragon Crew capsule took two astronauts to the International Space Station.

Now, in another first, a capsule has delivered a crew of four astronauts to the ISS.

After a 27-hour orbital chase, the Crew-1 mission arrived at the space station Monday night (Nov. 16) with four Expedition 64 crewmembers — NASA astronauts Victor Glover, Mike Hopkins and Shannon Walker, and Soichi Noguchi of the Japan Aerospace Exploration Agency, or JAXA. Also on board was a small “Baby Yoda” plush, which serves as a “zero-g indicator” during the ride.

“SpaceX, this is Resilience. Excellent job, right down the center,” Hopkins told mission control after the docking. “SpaceX and NASA, congratulations. This is a new era of operational flight to the International Space Station from the Florida coast.”

The event marks an important milestone in the private-public partnership in space exploration, which has been one of the many policy successes of President Donald Trump.

The goal was to fill the crew-carrying shoes of the agency’s space shuttle fleet, which was grounded in 2011, leaving Russian Soyuz spacecraft as the only ride to and from orbit available to astronauts.

In 2014, the Commercial Crew Program inked multibillion-dollar contracts with SpaceX and Boeing to finish work on their vehicles and fly at least six crewed missions to and from the station apiece. Crew-1 is the first of those contracted flights to lift off, and its crewmembers have now made it safely onto the orbiting lab.

“This mission was a dream,” NASA human spaceflight chief Kathy Lueders said during a news conference early Tuesday morning (Nov. 17). “It was a dream of us to be able to one day … have crew transportation services to the International Space Station. And today that dream became a reality.”

“It’s the start of a new era,” Lueders added.

Here is a video of the docking for those of you who love space missions.

Interestingly, Baby Yoda joins a long a distinguished line of other “zero-g indicators“:

The toy, modeled after the character from the Disney+ Star Wars series “The Mandalorian,” is part of a long tradition of astronauts flying small dolls to signal when they enter orbit. The toys, which are generally tethered to a wall or other anchor, begin to float about the cabin when the launch phase of the flight ends, indicating that the crew is in zero-g.

The custom began on Russian spaceflights, dating back to the first launch of a human into space in 1961. Soviet-era cosmonaut Yuri Gagarin carried a small doll with him on his Vostok 1 mission to watch it float. Since then, the zero-g indicators have varied from homemade dolls to off-the-shelf, commercial toys.

SpaceX adopted the practice with its first test flight of the Crew Dragon spacecraft, launching a plush doll of the planet Earth on its 2019 Demo-1 mission to the space station. The Celestial Buddies’ Earth was then joined by a sequined apatosaur, “Tremor,” which was chosen by the sons of Demo-2 crewmates Bob Behnken and Doug Hurley.

The “Little Earth” and dinosaur toys returned home with the Demo-2 astronauts earlier this year.

It has been wonderful seeing so many successful developments in the US Space Program. I sure hope they continue, instead of devolving into social justice experiments.

I’ve been so distracted this year, hadn’t even noticed.

Too bad he had a politically correct crew.

But he did it.

What do you mean “politically correct crew”

“It has been wonderful seeing so many successful developments in the US Space Program. I sure hope they continue, instead of devolving into social justice experiments.”

The great technological achievements of the previous Communist administration was the crappy Obamacare website and the rise of Maoist “cancel culture” enforced by Big Tech. Meanwhile many nuclear power plants are approaching the end of their intended life cycle (with a pitiful handful of new ones on the drawing boards that may or may not not get built), periods of rolling blackouts in the People’s Democratic Republic of California as the state steadily advances into the Stone Age, the coming Green New Deal that will turn the rest of the US into California, and the steady erosion of STEM curriculum in the US (the day is coming when you will regularly drive across bridges or work in buildings designed and built by engineers who believe math is racist). And that does not even take into consideration the coming lockdown that will turn our economy into Venezuela.

So the US getting rockets into orbit or elsewhere? The day is coming when we won’t be able to get ten feet off the ground.

I teach beginning engineering classes at a community college. There is growing pressure to “reimagine” engineering education, which means to turn statics, electrical theory, fluid dynamic and other staples of a typical engineering education into a Maoist struggle session. I can easily see that in a few years – perhaps as early as the first year of the Harris/Biden regime – much of the engineering faculty at top engineering colleges getting demoted, replaced, or fired in order to make room for the Maoists who couldn’t add two numbers together without a calculator. More and more engineering electives are being replaced with “multicultural” studies or EINO (Engineering In Name Only) courses that have no engineering content whatsoever.

So barring a major course reversal I see the US losing what engineering and scientific edge it still has.

I wish I had known about Baby Yoda when I had to do a zero-g maneuver to calibrate the angle-of-attack computer on my airplane. I just used a pencil and when it floated, I pressed the button.

While I was a be skepical of Space-X and am still off put by the names like “dragon”, I have been really impressed by the results of the entire Space-X organization. They have made space flight seem fun again.

We are still in the infancy of space exploration.