One big step for public-private partnerships, one giant leap for the US space program. 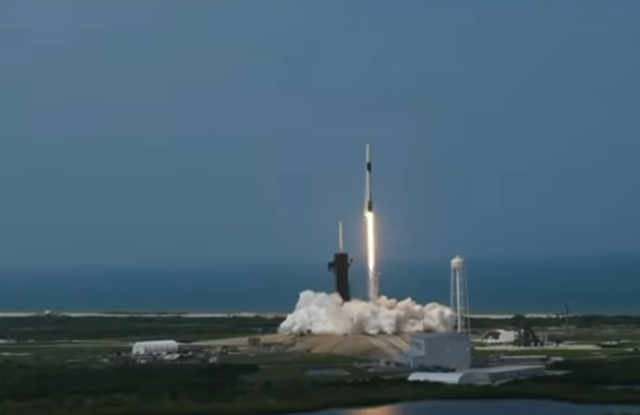 In a rare bit of good news coming out in 2020, SpaceX launched NASA astronauts Doug Hurley and Bob Behnken aboard a Falcon 9 rocket and Crew Dragon spacecraft.

They are heading to the International Space Station (ISS). The last time astronauts launched from from American soil occurred in 2011.

Hurley and Behnken blasted off from Kennedy Space Center’s historic launch pad 39A, which was also used for the Apollo and space shuttle programs, at 3:22 p.m. ET Saturday. An attempt on Wednesday was scrubbed due to weather conditions.

The launch is the first time a private company, rather than a national government, has sent astronauts into orbit.

…Launched atop a SpaceX Falcon 9 rocket, Hurley and Behnken are traveling to the International Space Station in a Crew Dragon spacecraft built by the space company.

Millions watched across the country, happy to be following news that didn’t involve pathogens or riots.

“Maybe there’s an opportunity here for America to maybe pause and look up and see a bright, shining moment of hope at what the future looks like, that the United States of America can do extraordinary things even in difficult times,” NASA Administrator Jim Bridenstine said before launch.

With the on-time liftoff by the 260-foot rocket, SpaceX, founded by Musk, the Tesla electric-car visionary, became the first private company to launch people into orbit, a feat achieved previously by only three governments: the U.S., Russia and China.

The flight also ended a nine-year launch drought for NASA, the longest such hiatus in its history. Ever since it retired the space shuttle in 2011, NASA has relied on Russian spaceships launched from Kazakhstan to take U.S. astronauts to and from the space station.

President Donald Trump and Vice President Mike Pence watched from Cape Canaveral, and are thrilled with the results of the public-private partnership in enhancing the US space program.

“I’m so proud of the people, of NASA, public and private,” Trump said. “When you see a sight like that, it’s incredible. When you hear that sound — the roar — you can imagine how dangerous it is.”

Musk launched SpaceX in 2002 to provide cheaper space travel and to realize his long-held dream of someday sending humans to Mars and living there.

“This is the most hands-off NASA has ever been and it’s been difficult for them to step back,” Harvard astrophysicist Jonathan McDowell told The Post. “But a lot is riding on the privatization of the space program.”

Musk’s success means that NASA won’t have to concern itself with mundane low-orbit space travel and can focus on “gearing up for another trip to the moon and beyond,” McDowell said.

There are a lot of similarities between Doug Hurley and Bob Behnken. Both joined NASA’s astronaut program in 2000, they are both married to fellow NASA astronauts and they are fathers. They even share the same taste in music.

Here is everything you need to know about Hurley and Behnken, the astronauts NASA administrator Jim Bridenstine has called “truly the best of us.”

Hurley, 53, was a U.S. Marine Corps fighter pilot prior to being selected as an astronaut by NASA in 2000.

Hurley is a native of Apalachin, New York. When he’s not flying to space, he enjoys hunting and spending time with his family in the Texas Hill Country, according to his official NASA biography.

Hurley is married to fellow NASA astronaut Karen Nyberg. They have one son.

Social media comments included references that reflected the wild ride 2020 has already been:

But seriously congrats to @NASA and @SpaceX! America is proud of you!#LaunchAmerica pic.twitter.com/xOsEbid1xy

Hot Damn! He we go!
Enjoy your riots losers. The rest of us are busy doing cool shit.#LaunchAmerica https://t.co/Y41BbCahT9

Today we see the best in the accomplishments of American capitalism with the #LaunchAmerica well as the wonton destruction of the antifa lead #riots2020 . An amazing juxtaposition. #Peacefulprotest is a #right not a #riot.

Congratulations to everyone involved in the launch. Here’s hoping they astronauts return safely!

This truly as been one big step for public-private partnerships, one giant leap for the US space program.

Did they bring their masks?

I don’t like those side-by-side seats in that cockpit. I’m telling Fredo’s brother.

Tell the DIMS they”re filming all their Dempanic moves in the DEM RIOTS…….

The unintended consequence of this space launch is that unimaginative bureaucrats and power hungry politicians have zero veto control over private manned space flight. They may try to hinder space firms via regulatory coercion, but in the long run, the government monopoly is finished.

The cat is out of the bag forever!

Moribund China will never outpace engaged space entrepreneurs no matter how much tech they steal.

I just wish they wouldn’t have used the politically correct term “spouse” to refer to their wives.

Spouse is preferable to “partner” that is common amongst the millenials nowadays.

I hear you. But I’m disinterested in satisfaction with a poisoned half loaf of bread.

Why does NASA push the trendy crap? The only way they can sustain the practice is by being ignorant that the folks “in need” of such terminology are by and large crime victims that need serious therapy. Such enabling is unwise and it’s further unwise to impose dysfunctional thought processes on the normal and functional.

This is Trump’s fault!

Elon Musk is so amazing. What a game-changer his birth was.

As afraid of flying as I am, I’d rather be there than here right now.

is “wonton destruction” a microaggression?

The America that put humans into orbit and on the moon is also the same country that has left wing terrorist groups rioting freely in the streets.

What the 2020 elections will answer is: which America will be in control?

America has rotted from within. We just didn’t have the collective fortitude to put our foot down early on in the school and media corruption process. We tolerated mccain and boehner.

Out only noble acts of late was electing PDJT and stickig with him like glue.

Fine, agree with the sentiment, except the rotting process was underway in the 60s. If you had been reading media back then, the way republicans were excoriated without mercy was unbelievable.

Congratulations to every one involved, private or government.

About damn time. The idea that Bush and Obama left us with no way to get to space but for relying upon the russians has always been outrageous.

Bush was a good guy, but as clueless as his old man. He was also a voluntary penata. But obama was and remains a most grotesque traitor.

Bush gave us endless war in the ME with no plan.

There are so many things Bush “gave” us.

About the only good thing Bush gave us was beating Fat Al Gore and Traitor Kerry.

Have to go with Barry on this. McCain-Feingold monstrosity was his. Coming out of retirement to criticize Trump but not Obama.

Telling us the Religion of Peace (TM) was the “religion of peace.”

The compare and contrast here is too rich. Private enterprise launching 2 Americans into orbit while in the meantime ferals in America’s cities seek to take America, and the world, back into the dark ages, the discoverers of DNA, penicillin and the other antibiotics be damned.

The USA launched its first satellite on Jan. 31, 1958. At 31 lbs it was a lightweight, yet it returned some heavyweight science (the existence of what would be known as the Van Allen radiation belts).

A little over four years later the USA put its first astronaut into low Earth orbit.

The last Space Shuttle flight was in 2011. So, what could once be done in four years can now be done in only nine. Which I suppose is not bad, considering.

After all, this spacecraft is quite a bit more capable than the one John Glenn flew in in 1962. Then again, the four year effort that made Glenn’s flight possible started from a very minimal base of experience and development.

So, perhaps we should celebrate that NASA, working with private industry, can still (sometimes) get things done. At great cost in time and money, perhaps, but this NASA ain’t exactly the 1960s version, is it?

I’ve seen that launch maybe 8 or 10 times — it doesn’t get old. I also have a recollection of listening to John Glenn being launched in Mercury. This one brought a tear to my eye.

I have watched a number of SpaceX launches, and watched them get to where they are routinely recovering their used rockets. It is exciting — maybe what we thought would be happening 40 or 50 years ago will finally take place.