Tubbs aimed for “Universal Basic Income” for the city. 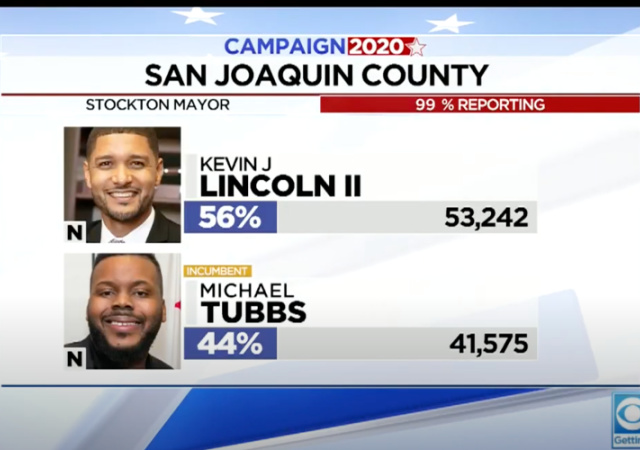 Legal Insurrection readers may recall that in 2018, the California city of Stockton’s then 27-year old mayor, Michael Tubbs, planned to launch his version of “universal basic income”, where its citizens are paid simply for being citizens.

Voters chose Lincoln, a 40-year-old Republican who is Latino and Black. He was born and raised in Stockton but left to join the Marines in 2001. He later landed an assignment on Marine One, the helicopter that carries the president, during George W. Bush’s administration. He returned to California and worked for a private security company in Silicon Valley before coming home to Stockton to be executive pastor of LifeSong Church.

Lincoln said he’s already left his job at the church and will take office in January. He won’t oversee Tubbs’ guaranteed income program because it is run by a nonprofit that’s separate from the city. He said his goal is to focus on the priorities of Stockton residents.

“There has been a disconnect and a lack of trust and transparency between the residents of Stockton and their elected (officials),” Lincoln said. “Putting the needs and priorities of the people of Stockton first is going to take each and every one of us increasing our level of engagement.”

The Los Angeles Times explained his impending loss to a rogue blog and alternative media.

Tubbs, the city’s first Black mayor and a favorite in progressive circles for championing ideas such as universal basic income, trailed Republican Kevin Lincoln 52% to 48%, though county officials said many mail-in ballots remained to be counted, leaving the possibility of a reversal.

Though Tubbs won his first mayoral election in 2016 with 70% of the vote and an endorsement from President Obama, this time he has been dogged by a social media page whose founder acknowledges he harbors a grudge against Tubbs — and which has hounded the incumbent, and other local political figures, with years of accusations of corruption and misdeeds.

As the city’s local newspaper, the Record, has struggled with staff cuts in recent years, the social media page, the 209 Times, named for the local area code, has amassed nearly 100,000 followers on Facebook and 118,000 on Instagram. Motecuzoma Patrick Sanchez, one of the founders of the 209 Times, said it has millions of interactions with viewers on its website and social media pages every month, making it one of the area’s most popular sources of information.

The Los Angeles Times is not ready to let go of Tubbs just yet since come people “say he’s still a rising star.” I guess he is still one:

“He obviously has a Rolodex that is different than a lot of people,” said Democratic political consultant Andrew Acosta, who has worked for other candidates in the San Joaquin Valley, but not Tubbs.

Tubbs has a personal relationship with Vice President-elect Kamala Harris, has worked with Gov. Gavin Newsom on issues including homelessness, supported Democratic presidential contender Michael Bloomberg early in the primary and interned at the Obama White House. Oprah Winfrey was one of his early political donors.

“He should not be written off,” said Steve Maviglio, a Democratic political consultant in Sacramento. “The guy reminds me of Bill Clinton. He, like Bill Clinton, had a very tough loss … but I think he’s super smart, super energetic, well-liked — apparently not by the voters of Stockton — but well-liked in the policy groups and political circles.”

While Lincoln’s policies and voter outreach may have been key factors in his victory, the likely new mayor can also be grateful that San Juaquin County also doesn’t use the glitchy Dominion computer voting system.

It should be called “brown wave” because it’s more like what goes down the toilet bowl.

“Though Tubbs won his first mayoral election in 2016 with 70% of the vote and an endorsement from President Obama, this time he has been dogged by a social media page whose founder acknowledges he harbors a grudge against Tubbs — and which has hounded the incumbent, and other local political figures, with years of accusations of corruption and misdeeds.”

The lack of self awareness from the LA Times is staggering. How does this accusation differ from what the Times (and the rest of the Joseph Goebbels media) have done to Republicans for decades? Open, naked anti-Republican hatred is the hallmark of the media.

Interestingly, the Times claimed the accusations against Tubbs were false, but cited no evidence to back up their claims. Instead, they have the totalitarian mindset that they are the sole arbiters of Truth. Unfortunately for the Times, Journalism as Sacred Priesthood (TM) doesn’t sell as well as it used to.

So 56% of the voters in Stockton know that free money is not free. Good.

Obviously Lincoln was voted in by white supremacists /

Stockton is a hardscrabble blue collar town but the LAT is touting Tubbs because he is buddies with Gov. “French Laundry” Newsom, Kamaltoe Harris, Mike Bloomberg and Oprah Winfrey

Tubbs is a Progressive “Darling”, yet he backed Bloomberg in the primaries. I guess $$$ does talk to DEMs, Progressive or not!

Tubs lost because of racism. Right?

So, Orange County doesn’t use Dominion, huh! And awesome Republican women were able to flip 2 House districts. What a nice coincidence