“Well, I don’t really care what you think. Of course, you agree with him because you’re in the same business with him.” 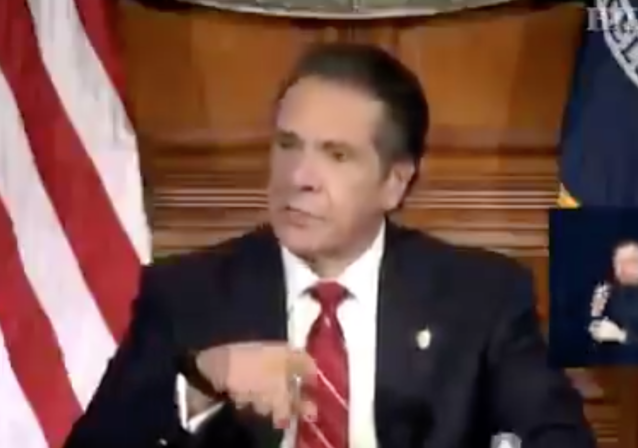 This is really something else. New York Governor Cuomo was asked about school closures in New York City and went off on Wall Street Journal reporter Jimmy Vielkind who asked the question.

While deBlasio announced NYC schools would be closing indefinitely, blaming COVID, New York Governor Cuomo seemed to have missed the memo before his press conference.

Look at his indignation! At the suggestion that NYC schools might close on Thu. “You’re confused,” he says smugly. Right before NYC announces: School’s are closing on Thu. Gross. https://t.co/3Q3uc2Pd0t

Fox News has more on the exchange:

New York City schools will be closed beginning Thursday due to a rise in coronavirus cases, Mayor Bill de Blasio announced Wednesday. But he may have forgotten to tell the top boss of the state. At the same time the Democratic mayor announced the move on Twitter, a combative Gov. Andrew Cuomo told reporters that schools were open.

De Blasio said officials opted to close schools out of an abundance of caution after coronavirus test positivity rates hit the 3% threshold.

“We must fight back the second wave,” the mayor said on Twitter.

The Democratic governor, who was holding a press conference of his own in Albany, got into a testy exchange with Wall Street Journal reporter Jimmy Vielkind, who asked if schools would remain open amid a statewide rise in infections.

“All right, first of all, let’s try not to be obnoxious and offensive in your tone. Because you’re 100 percent wrong,” Cuomo said, before raising his voice.

“Remember we did orange zone, red zone in Brooklyn and Queens and we closed the schools? Don’t you remember that? So what are you talking about?”

Schools in designated “red zone” districts in the two boroughs with positivity rates higher than 3 percent shut down weeks ago.

“Any school district in a microcluster, the schools can remain open in an orange zone but they have to do additional testing,” said Cuomo.

New York Times reporter Jesse McKinley continued to press the governor on whether schools would be open Thursday. “The schools are open by state law,” the governor offered.

“But will they [New York City schools] be open tomorrow? That’s the question. I think Jimmy’s correct in asking that question. I don’t think it’s obnoxious at all,” McKinley said.

Cuomo then fired back, “Well, I don’t really care what you think. Of course, you agree with him because you’re in the same business with him.”

So much indignation and ‘tude when the answer was yes, schools in NYC are closing indefinitely beginning Thursday.

So short, that trip calls Michael Bloomberg “Skyhook” without a hint of irony.

notamemberofanyorganizedpolicital in reply to Dusty Pitts. | November 19, 2020 at 1:08 am

In Chicago’s suburbs, bars and restaurants are now simply ignoring mandates that they shut down — they say they must remain open. It’s a matter of simple survival.

A New York state sheriff has answered mass-murderer Andrew Cuomo’s decree that Thanksgiving is cancelled — he says they will not be enforcing this lawless decree.”

.
This is one guy I’d love to see have a complete meltdown–you know, something he can’t recover from.

Sit him on a pile of thermite.

I soooo want him to run for President in 2024. Governor Thin Skin will be so much fun to heckle when he comes to NH.

I have to wonder if the Joseph Goebbels media is starting to worry about the fallout over yet another round of shutdowns. While the United States will become an official banana republic as soon as Biden takes over, even banana republics can collapse if the proles get angry enough.

How else to explain why the NeverTrump-on-steroids WSJ dared to ask the sovereign an impertinent question?

notamemberofanyorganizedpolicital in reply to Recovering Lutheran. | November 19, 2020 at 1:11 am

Banana Republic’s shoot their leaders every couple of months don’t they?

He continues to widen his Fredo Sweepstakes lead over his brother. CNN viewer should be afraid, very afraid. Its beginning to look like Chris will need to go for broke and off a few thousand of his viewers to catch up with Andrew.

Cuomo is way over his head.

Don Corleone was lucky he had Michael. Don Mario stopped one too soon.

“ the tree of liberty must be refreshed from time to time with the blood of patriots & tyrants. it is it’s natural manure.”

Listening to Gov. Cuomo’s remarks, I think it’s clear that the blood Mr Jefferson imagined watering the Tree of Liberty should flow not necessarily from the folks we elect and send to Washington, DC.

What part of the U. S. Constitution protects citizens from usurpation of their “natural” rights by sate governors?

2nd Amendment, they understand this, that is why they constantly attack 2nd Amendment rights.

How dare a member of the press question the crowns fiats.

A recent report states that Covid in NY City schools is trivial and it was DeBlasio caving in to the teachers’ union (UFT) with this 3% general prevalence standard for closing.
https://nypost.com/2020/11/16/nycs-school-leaders-fail-poor-children-as-they-cry-about-equity/

Lucky for NY City Biden appears to have won, as they are losing people (and their tax base) at a rapid pace, including Megyn Kelly, self-described as “lean center left on some things”.
https://nypost.com/2020/11/18/megyn-kelly-pulls-sons-from-woke-uws-school-over-anti-white-letter/

In my opinion, a tipping point will come, if it hasn’t already, where all the money in the world will not save NY City. Too many people will leave and that will destroy the economic base of the city. Restoring the SALT deduction will make no difference to people who have no jobs there, lousy or non-existent education and lack safety.

More like an abundance of stupidity. Positive tests are not symptomatic disease, and even if it was children have essentially zero risk from covid. Note also that “3%” is the general population, not children specifically.

“Well, I don’t really care what you think. Of course, you agree with him because you’re in the same business with him.”

Somebody tell him he sounds like someone else we know. The reaction should be entertaining.
.

Here’s another official who easily goes nuts yet no one ever asks the question:

Yet another example that earth has been captured by space aliens and they are mocking us.

As long as the electorate is New York, many of them are citizens and alive, keep fools/tools like Fredo’s brother in office, outbursts like this will happen. Elections have consequences, Exhibit 1.

DEMOCRAT … DEMENTIA, both words have the same number of letters and the same definition!!! Coincidence … I don’t think so !!!!!

At Cuomo’s presser regarding yesterday on the closing of NYC Schools when the reported number of cases is actually well below 2%, the Press asked about the low numbers reported esp. from Up State. Cuomo couldn’t pivot away quick enough by using snark and denial. He did however use the opportunity to pass the buck and go on to partially blame the severity of the pandemic on people not abiding by the rules. “So, the restrictions work and just to make it very simple: If you socially distanced and you wore a mask and you were smart, none of this would be a problem. It’s all self-imposed. It’s all self-imposed,” He then went on to say, “If you didn’t eat the cheesecake, you wouldn’t have a weight problem.”

With one sized fits all mentality, and being tone-deaf, as he is, what he said (simply) comes to this. If only people were “smart” and “not fat”, he wouldn’t have these problems. There would no need for him to get his pen out and without any qualm tell NYS families they must forego Thanksgiving with threat of arrest if not followed.

Of the 62 counties in NYS, 15 are Democratic and metro/urban centers of population. The other 47 are Republican huge source of his hostility. In return and reply, Up State NY’ers in these 47 counties are not going to subscribe to foregoing Thanksgiving. The tone at county levels is the County Sheriff’s Dept.’is not going overtly say no, but on the other side, they do not intend to send ‘a simple message’ out by with road patrols to check on those ‘smart’ and ‘fat’ people.

It would be cool to force states like NY and CA to pick their governor in an Electoral College setup by county. That would even out (somewhat) the insanity of a seat warmer like Cuomo.