We all know IL House Speaker Mike Madigan is the man in charge of the state. But that seems to be coming to an end…finally. 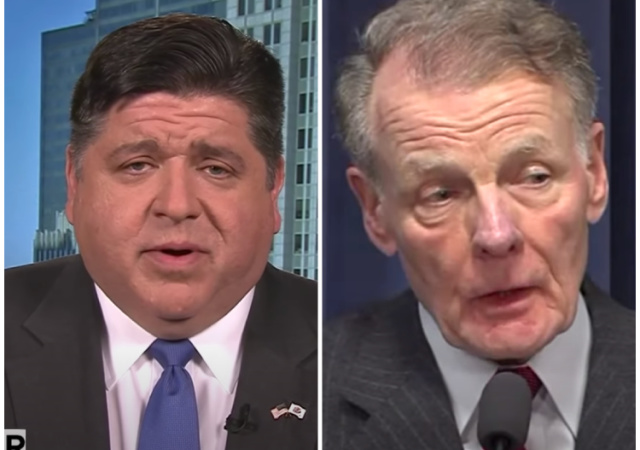 Guys, this is huge. Actually, it is YUGE.

Illinois House Speaker Mike Madigan has led the state’s Democratic Party since 1998. He has served in the house since…1971. Us natives know that Madigan is the one in charge of Illinois.

Madigan is the face of Illinois politics, including alleged corruption. I say allegedly because he has never been convicted of corruption, but you hear the whispers.

The latest charge is the biggest one because Commonwealth Edison admitted “it engaged in a yearslong bribery scheme to win the speaker’s favor.”

That “fair tax” amendment would have eliminated the flat income tax in Illinois’s constitution and force the rich to pay their fair share.

I guess Madigan’s star is fading because Illinois Democrats have chosen him as the scapegoat.

Pritzker brought up Madigan after Sen. Dick Durbin (D-IL) lashed out at the speaker:

“Candidates who had little or no connection with him whatsoever were being tarred as Madigan allies who are behind corruption and so forth and so on,” Durbin said. “It was really disconcerting to see the price that we paid on that. I hope he takes that to heart and understands that his presence as chairman of our party has not helped.”

While Durbin didn’t directly call for Madigan to resign, Pritzker was asked at his daily coronavirus briefing Thursday whether he agrees “with Sen. Durbin that we need new leadership at the party.”

Oh, it gets better, you guys! Everyone is piling on Madigan. It’s so delicious.

The calls for Madigan to step down hitting a crescendo, Duckworth issued her statement later in the day.

“The ongoing investigation surrounding Speaker Madigan is an unnecessary distraction and makes it harder to carry out the work of helping the people of Illinois,” Duckworth said. “As our nation hopefully embarks on a brighter path with a new President, the Illinois Democratic Party and the Illinois House of Representatives should consider new leadership to continue the progress we’ve made at the state level and build on it.”

The Illinois House of Representatives had a brutal night, losing four Democrats: Diane Pappas of Itasca, Mary Edly-Allen of Libertyville, Monica Bristow of Alton, and Nathan Reitz of Steeleville.

Eating their own in a liberal state? This must be bad.

notamemberofanyorganizedpolicital in reply to 2smartforlibs. | November 6, 2020 at 2:37 pm

To that I say “Bon Appetite!”

But Groot’s still safe, right? Because that would be too much to expect.

Totalitarian jackals fighting over the spoils.

Of course FatAss is going to blame someone else. He couldn’t possibly be at fault, especially after he’s worked so hard to finish the destruction of Illinois these past eight months. They all need to go… the problem is most Illinois Rs are merely D-lite.

Meet the new boss same as the old boss.

High profile swamp rats like this do nothing without calculation. That means, while this is enjoyable to watch, there is something worse on the horizon. It may be nothing more than bait and switch to maintain the status quo, but it can’t be positive with names like Durbin and Duckworth on board.

The fault is the entire Democrat-RINO-Uni-Party and their Communist Chinese slave owners.

notamemberofanyorganizedpolicital in reply to NorthernNewYorker. | November 6, 2020 at 4:56 pm

I understand that is what Democrats call
“Chump Change.”

Of the 18 billionaires in IL, half are in his family.

Pritzker is so angry about losing the tax issue that he publicly berated voters, saying that we would have to answer for that; and then he started talking about lockdowns–it’s clear that Governor Petulant had decided to punish people for the way they voted–if he locks us down again, I think you’ll see wholesale rebellion. It’s getting kind of ugly, at least downstate.

A couple/few weeks ago the overt threat was everyone’s income tax would go up 20% if Guv Boss Hog didn’t get his way on his ‘fair tax’ proposal.

Seems enough Illnoisans realized that was going to happen anyway. There’s no other way out for Illinois. And even that won’t be enough.

Illinois is f’d if the federal government doesn’t bail it out. Which was the other thing Illinois’ Inherited Wealth Billionaire Governor was counting on.

“That “fair tax” amendment would have eliminated the flat income tax in Illinois’s constitution and force the rich to pay their fair share.”

That lie is right out of Pritzker’s play book, and not even remotely accurate. This constitutional amendment would have freed the D’s from the flat tax and allowed them to raise taxes to any level and on anyone, not just “the rich”, as high as they could imagine. Fortunately, 55% didn’t buy that load of shyte.

Now come the threats. He’s been saying “it’s going to hurt.” His lieutenants have been threatening %20 income tax hike. Never any mention to cut spending or eliminate some of the 7,000 units of government.
A good place to start is the legislature. Cut the state house and senate by half.

As far as Madigan is concerned. He’s not yet been charged with a crime. He built his fiefdom or machine as is Cook County typical and I’m sure he’s been investigated thoroughly over the years. As much as I can’t stand him and it, he still has rights and as long as he can maneuver, coerce or chicane the other reps to vote him as speaker, Gov and others are wishful thinking.

Durbin and moreso, Pritzker are filth you wipe off the bottom of your shoe. Madigan by far is the most corrupt politician in arguably the most corrupt state in the union. IL has taken a steeper nose dive ever since he took complete control. It’s beyond repair.

I say this as someone who isn’t very close to Madigan or Pritzker, but close enough to know just a portion of their ugly dealings.

BTW I love watching them eat each other. And Pritzker can eat a lot.