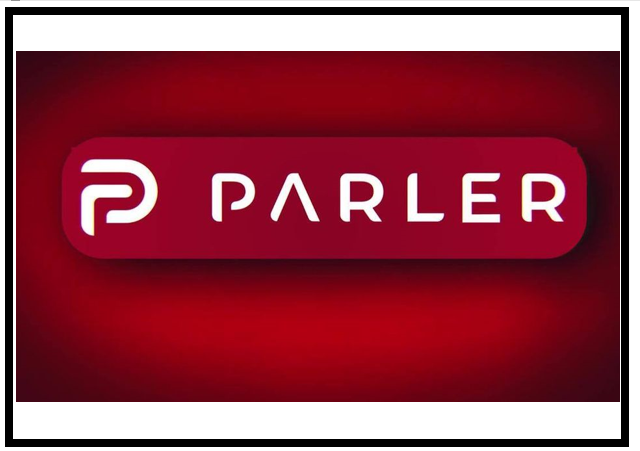 I would like to start this post by thanking all my Legal Insurrection fans who have followed me to the social media platforms on MeWe.com and Parler.

Legal Insurrection now has a MeWe.com account, in addition to its Parler account. Look for our team to me more active on these new forums in the future.

I would also like to mention Rumble.com, which which the replacement for Youtube for those of us who tire of their monetization antics and tendency to disappear or throttle videos.

The platforms have experienced explosive growth since the election.

In the days since the election, Parler and MeWe, two apps that angle themselves as uncensored alternatives to mainstream social media, have overtaken TikTok and Zoom as the most-downloaded apps on the iTunes and Google Play stores. Last week alone, Parler was downloaded approximately 580,000 times worldwide, with the majority of those downloads in the United States — a roughly 353-percent increase from its rate of downloads last October, according to data the analytics firm Apptopia shared with Rolling Stone. The influx of new users on Parler has been so great that the app is reportedly experiencing technical glitches as a result.

MeWe has seen a smaller, yet still explosive, bump: within the past week, it has been downloaded more than 130,000 times, with 100,000 of those downloads in the United States. By contrast, it received a little more than 50,000 U.S. downloads within a one-week period in September.

The elite media is clearly worried that conservatives are escaping their free-speech killing sewers, as they are deriding the platforms as “fringe” and “extremist”:

…[M]uch like the social media site Gab, Parler has quickly attracted the extremist crowd in addition to self-proclaimed center-right conservatives like Read. Groups from the far-right Proud Boys, which includes large numbers of white supremacists, to heavily armed anti-government militias have gathered on the site to spread conspiracy theories, racist memes and false claims of election fraud.

It appears that the Democrats and progressives are not content with simply silencing our news and opinions on Facebook and Twitter and mocking our choices. A DNC operative organized a “troll party” to harass conservatives who are now parleying instead of tweeting. 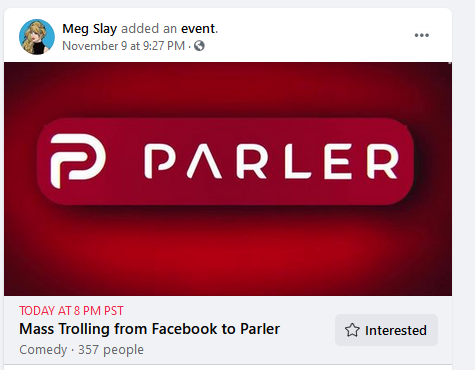 So the snowflakes are retreating to their ‘free speech’ safe space after being obnoxious cunts for four years.

I have to say, this “unity” the Democrats are talking about looks a lot like snark and insults.

Please parley me or contact me on MeWe.com and let me know if you were trolled by Meg and her 357 bitter minions.

I’m not usually an early adopter on technology, but i am looking into migrating over to these sites.

I’m not on Twitter. So, I will not migrate to Parler. Just want to do my part.

I wonder if Trump will move over?

I tried to sign up for Parler but Google powered Captcha would not accept my correct code in order to activate my account. These companies need to get away from all Communist tech company’s products.

notamemberofanyorganizedpolicital in reply to SpaceInvader. | November 15, 2020 at 6:07 pm

Change your browser to DuckDuckGo.

I had the same problem using Brave. I am not thrilled about giving them my cell number anyway, so I will just pass on Parler.

I tried some time back with a Brave browser. It still didn’t work. It could just be a crappy app, not some nefarious Google plot.

Leslie I’m sure that was quite some pity part the Democrat Party leftists – who are never funny – threw.

I like what Ace of Spades had to say about the leftist media attacks on freedom.

Conservatives are snowflakes for opposing censorship, blacklisting, and scalp-hunting, the Stasi Media is now saying.

The Treehouse is Deplatformed…

Most CTH readers are likely aware of the term “deplatforming.” Unfortunately, the big tech control mechanism to shut down speech & assembly has now arrived on our doorstep.

One week after the 2020 presidential election, The Conservative Treehouse received the following notification:

…”given the incompatibility between your site’s content and our terms, you need to find a new hosting provider and must migrate the site by Wednesday, December 2nd.

What does this mean? It means CTH is being kicked-off the WordPress website hosting platform because the content of our research and discussion does not align with the ideology of those who define what is acceptable speech and what is not.

What was our violation? After ten years of brutally honest discussion, opinion, deep research and crowdsourcing work -with undeniable citations on the events we outline- there is no cited violation of any term of service because CTH has never violated one.

The WordPress company is not explaining the reason for deplatforming because there is no justifiable reason for it. At the same time, they are bold in their position. Perhaps this is the most alarming part; and everyone should pay attention. They don’t care.

Truthful assembly is now the risk……

Everyone is conservative about what he knows best.

Any organization not explicitly right-wing sooner or later becomes left-wing.

The simplest way to explain the behavior of any bureaucratic organization is to assume that it is controlled by a cabal of its enemies.

1. Identify a respected institution.
2. kill it.
3. gut it.
4. wear its carcass as a skin suit, while demanding respect.
#lefties

randian in reply to notamemberofanyorganizedpolicital. | November 15, 2020 at 9:09 pm

It’s only a matter of time until the domain registrars get in the game. WordPress dropping you is the least of your worries if you can’t operate the canceled domain. They might even cancel all your domains.

Milhouse in reply to notamemberofanyorganizedpolicital. | November 16, 2020 at 1:50 am

The nuthouse is making a much bigger deal of this than it has to be. All it means is they find another hosting company and migrate the entire site there. There’s no need to change anything, and most users need not experience any disruption at all. Yes, it’s a pain, and it’s unfair, but they’re making it seem like they’ll have to ditch the WordPress platform and look for some other format, and that’s just not true. WordPress is free for anyone to use; it’s under the GPL, so nobody can prevent them from using it no matter who ends up hosting them.

“I have to say, this “unity” the Democrats are talking about looks a lot like snark and insults.”

It’s nothing less than the Ku Klux Klan, trading in their bedsheets for spreadsheets.

notamemberofanyorganizedpolicital in reply to henrybowman. | November 15, 2020 at 6:32 pm

…crossed with the Nazi Storm Troopers.

We have met the Nazi….and they’re the Democrat Party.

Lefties are like the Redcoats, who also thought individual freedoms that would become First Amendment rights were also “fringe“ and “extremist.”

Proud Boys? Strange ” white supremacists” with a black chairman.
BTW, Enrique Tarrio is one hxll of a spokesman.
I basically know nothing more about them. Watched him eat some MSM chick’s lunch. He did it calmly and with class.

I had a long telephone conversation with the proud boys people in my state. They were very interesting crowd. I like their goals. I opened up to them and described a couple of my minority status is, and that didn’t phase them in the slightest. The main reason I elected not to join with them, as I’m just too old, two week, and frankly I don’t have the guts to do what they do. But I do support them.

There comes a time when we’re a liability to the fighting crew. But I damn sure can load ammo.

I had a similar experience. Talked for some time with a regional leader, but decided they were a little too physical in their induction rituals for my safety. If I were 20 years younger, no prob!

The Jerusalem Post appears to have been trolled by some neo-nazi lunatic who claims to have “taken over” the Proud Boys in a “coup”. They reported this as straight news! I read it carefully for any indication that it was a serious news story that I should pay attention to, and couldn’t find any. It just seemed an obvious troll, and yet the reporter was so gullible.

The “neo-nazi lunatic” was probably a Bernie bro, antifa, or BLM activist attempting to get that “news” spread.

Here’s the article. The troll’s name is Kyle Chapman.

Ah, conservatives… American conservatives: Pro-Life, Liberty, and the pursuit of Happiness. Tolerant to a fault.

Wait a minute. I thought harassment was strictly forbidden on Facebook. I thought you couldn’t even tell fired reporters to “learn to code”. So how are they allowing this? (Don’t bother answering, the question is rhetorical.)

They stole it right out in the open, and we knew they were going to do it before they did it, and we couldn’t stop them. Trump even knew it four years ago when he talked about forming a vote fraud commission, but he backed down when he met resistance. It was obviously time to bear down, not back down. Of course the thieves resisted him.

He formed the commission, but it couldn’t get anything done when the states refused to provide it with the information it needed. Presidential commissions, of course, have no subpoena power, just as the president himself doesn’t.

It was so nice not to know everyone’s opinion about everything, especially when everyone is looking.

Social media should be treated like the public health hazard it is, and this does not mean violating rights under the law.

notamemberofanyorganizedpolicital | November 16, 2020 at 1:18 am

This guy knows how to troll.

Someone has to be the adults in the room. I guess it falls to Conservatives like always.

How much you wanna bet these guys argue against bullying in school. “Bad for thee, but not for me.“