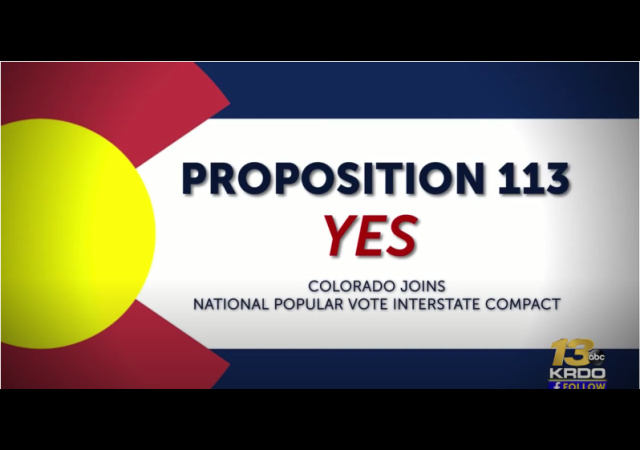 Colorado passed Proposition 113, which will award the state’s electoral votes to the candidate who wins the popular vote.

The idea came to the forefront after the 2000 fiasco but really picked up in 2016 after President Donald Trump thumped failed Democrat presidential candidate Hillary Clinton.

She got the popular vote, but he won the electoral vote.

The National Popular Vote nonprofit group has 16 states behind the idea, which take up 196 electoral votes.

The ballot measure had 52.2% support Wednesday evening with 88% of the vote counted statewide.

Even as The Associated Press was declaring that Prop 113 had passed, 2020 Democratic presidential candidate Joe Biden held an approximately 3 million-vote lead over President Donald Trump in the popular vote nationwide while still trying to nail down the 270 votes needed in the Electoral College. It’s too soon to call the 2020 presidential election, but Hillary Clinton lost to Trump in the Electoral College in 2016 despite finishing with a similar lead in the popular vote.

But Frank McNulty, a Republican former state House speaker who served as an adviser to the anti-Prop 113 group, said the close margin indicates “that Coloradans are clearly divided on the issue.”

“They were tricked by California billionaires, who spent millions of dollars to buy our votes for president,” he said. “Colorado’s votes should be decided by Coloradans. This is going to reduce Colorado’s clout, and it’s going to reduce our influence on issues like transportation, water, health care and funding for our military bases.”

State Sen. Michael Foote stressed that the idea forces candidates to think about everyone in the country and not just swing states.

That’s ironic because Colorado is somewhat a swing state.

Maybe Foote should remind people within the Democrat Party to actually visit states. Hillary thought she had it in the bag and brushed off states while Trump traveled everywhere to pick up support. Joe Biden hid in his basement in 2020 while Trump traveled to many states a few days before the election.

So they invalidated the CO voters preference for that of the national majority…Many wows….

And I thought the Colorado state government was supposed to represent the interests of Coloradans. Silly me.

So the hell with what Colorado wants (votes for).

This is why politicians believe that their constituents are TDSTL[Too Durn Stupid To Live]. These idiots in Colorado just voted to disenfranchise themselves in future Presidential elections. Now it does not matter who the voters of Colorado vote for for President. They may as well stay home. Their Electoral College votes will go for whichever candidate wins the votes of people in NY, CA, TX, FL, etc. What a bunch of maroons.

I’m watching my country die and don’t know what to do.

Start chemo-radiation as soon as possible.

I hate my state.

So you live in California too?

Can’t live in two places at once. If I had a choice, CO is better than CA but both are going down the toilet.

Is this Constitutionally permissible? Even if so, this can’t be construed as anything other than a total flouting and undermining of the intended purpose of the electoral vote. It’s a back-door popular vote mechanism that completely ignores in-state voters’ preference, in certain scenarios, and effectively nullifies those voters’ votes, if they are in opposition to the national popular vote.

Number one, no interstate compact is valid without US Congressional permission. Number two, it also has to pass a test of constitutionality at SCOTUS when challenged. Hopefully it will fail at one of these choke points.

Yes, it’s constitutional. There is no “intended purpose of the electoral vote”, if by that you mean the vote of the people of Colorado. The constitution doesn’t recognize any right for you or I to have a say in the choice of our states’ electors. The electors are to be chosen however the state legislature says they should. If the legislature says the DNC shall choose the state’s electors, then that’s what happens. If it says the electors shall be chosen by an athletic contest or by a game of chance, that’s what happens. And now the Supreme Court has said the legislature can tell the electors how to vote, so it can say they must vote for the Democrat, or for the tallest candidate, or the oldest, or for the one who isn’t a straight white male (if there is one), etc.

And no, they don’t need congress’s approval for this compact. The compacts clause only applies to agreements that expand those states’ power at congress’s expense. Any compact that doesn’t affect congress is none of its business and doesn’t need its approval. So said the Supreme Court more than 100 years ago, and nobody has challenged it since.

But the first time a state that’s signed on to this thing votes differently from the national majority, it’s going to fall apart. The state’s voters aren’t going to accept that their electors will ignore their wishes just because that’s what they said they should do.

I look forward to being there on the day that someone has to argue that a compact that affects the very membership of Congress “doesn’t affect Congress.”

This doesn’t affect the membership of congress in any way.

But even if it did, that wouldn’t expand the contracting states’ power at the expense of the Union’s, so under the standing precedent it would still be none of the congress’s business.

The problem is that the legislators of Colorado did not make this law, it was made by Proposition.

The Supreme Court considered and rejected that argument about 5 years ago, if I recall correctly, in a case from Arizona.

This works for the pot smokers until the first court challenge.

Pot apparently isn’t enough so Oregon just decriminalized heroin. Btween that and the $250M a year to fix the homeless problem, eg, buy tents and give out food, our homeless population will double in the next year, requiring even more taxpayer money to fix. I guess it is SF’s turn to up the ante for worst run city, ever.

What we need is consistency in the electoral process among all of the states.

What I would propose is a constitutional amendment, or rather a revision to the 12th amendment, that explicitly states that whomever wins the popular vote in each state, is the one that gets the electoral college points. I say points instead of votes because I do not believe that we need people serving in the role of electoral college members any more. As seen on election coverage, the news people state that Biden or Trump won the state of “X” therefore that states electoral votes go to that candidate. Why add the unnecessary risk of human interaction in that process?

Every election in America other than the presidency is decided by popular vote, and not an “electoral college”.

Are these elections decided by “mob rule”, or the will of the people?

This site is an absolute joke.

I’m pretty sure this is illegal. And to the degree that it’s not we need an amendment to make it illegal. This is insane to disenfranchise your voters that way.

I lived in CO up until a couple of decades ago. It was a very sane place, and even the Dems like Dick Lamm were reasonable people.

But Californians were moving to CO in droves, drawn by companies like Hewlett-Packard, who were attracted there by lower costs and saner policies. It was easy to see that they would soon take over the state government.

Now the Californians have brought California-style government to Colorado. Colorado will do what WA and OR have been doing, enacting the same laws as CA and electing far-left politicians. WA even has a law saying that California’s CARB (air resources board) sets the legal standards for the cars that can be sold in Washington. I expect no less of Colorado.