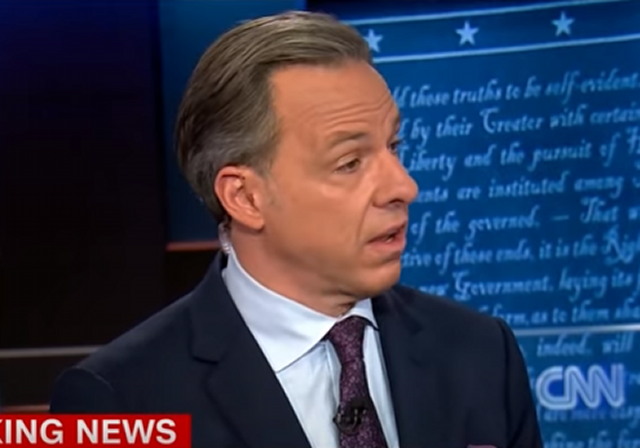 First, we had threats of a “Truth and Reconciliation Commission” to publicly shame Trump supporters. Then we had promises of blacklists.

Now Jake Tapper of CNN is openly saying that refusing to accept a Biden win could potentially be used against you professionally.

Tapper works for a network that pushed the Russia collusion hoax, and anything else that could be used to question the legitimacy of Trump’s 2016 win, but that doesn’t matter because reasons.

Just three days after liberal New York Rep. Alexandria Ocasio-Cortez urged the creation of a list of President Trump’s “sycophants,” a top CNN host has piled on with a warning that Trump aides battling the president’s legal case could see their job possibilities dry up.

Jake Tapper even suggested that sticking with Trump’s legal fight could be seen as a character flaw that future employers would reject.

“I truly sympathize with those dealing with losing — it’s not easy — but at a certain point one has to think not only about what’s best for the nation (peaceful transfer of power) but how any future employers might see your character defined during adversity,” he tweeted. 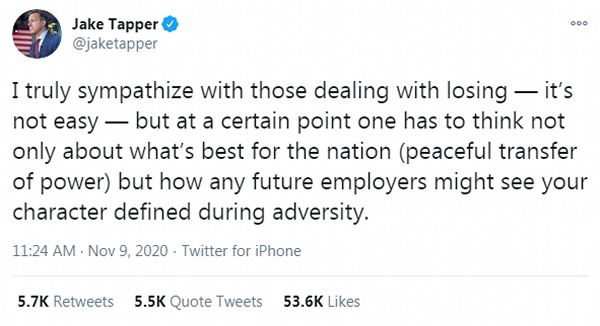 Here’s a loose translation: Nice work future you’ve got there. It’d be a shame if something happened to it.

It’s particularly bizarre given that Tapper, CNN’s 4 p.m. EST anchor, spent the last four years leading the media crusade to delegitimize the Trump presidency by perpetuating conspiracy after conspiracy for Trump’s crime of winning the 2016 election. Yet Tapper, with seemingly no self-awareness, has the audacity to characterize conservatives as conspiracy-ridden rivals of democracy for raising concerns over voter fraud in key states.

From alleging Trump is an agent of the Russian government operating to subvert American interests, to hyping claims that Justice Brett Kavanaugh was a “serial gang-rapist,” Tapper has some self-reflection to do before demonizing how others might conduct themselves during “adversity.”

The left is once again proving they are everything they accuse others of being:

Jake, are you making a list like AOC to make sure people who disagree with you politically lose their jobs?

Seems like you're pushing a veiled fascist threat here.

If you have time, you may want to watch Tim Pool’s reaction to this:

Careful who you threaten.

notamemberofanyorganizedpolicital in reply to 2smartforlibs. | November 10, 2020 at 4:29 pm

Idjits that live in rented glass towers should not be playing with guns…..

I’m retired, flush, and have all the time in the world to make your life miserable, Tapper.
So, to quote Billy Butcher, “Bring it, c*t.”

Or get mauled by an unfriendly bear.

Brought this budding McCarthyism up to some ignoramus, who responded that it’s not at all the same because McCarthy was a Republican.

Shows the level of intellect of many haters.

That’s strange old school, isn’t it? McCarthy was in the 50s which according to those kind of people was before the so called party switch…

McCarthy was also right as revealed in the 90’s with the release of Venona.

Venona should be mandatory reading in school. Ditto for NONE DARED CALL IT TREASON.

“Peaceful transition of power?” JFC these people. They pulled the phony Russian hoax, ran cover for Spygate (and a lot more), and now he calls for a peaceful transition? Gitmo would be too good for this crowd. GFY tapper.

I don’t feel no ways peaceful.

Jake should feel tard. And feathered.

I disagree. Gitmo is NOT too good for them.

notamemberofanyorganizedpolicital in reply to CKYoung. | November 10, 2020 at 4:31 pm

He should get as peaceful a transition from Trump as Trump got from Obastard.

Perhaps Pelosi can put together a bill and call it the ‘Law for the Restoration of the Professional Civil Service’.

Biden’s coronation is certainly premature at this point.

notamemberofanyorganizedpolicital in reply to nordic_prince. | November 10, 2020 at 4:32 pm

That’s what Jill always complains about…..

I won’t be allowed to post my reaction to Tapper, here. Suffice it to say the initials are “KMA”.

So hard to keep track — we need a list of all the Leftists making lists!

We’ve been down this road many times in the 20th century, but this ends with Leftists discovering who owns the vast majority of those 600 million guns.

But Jakey- You said for 4 years that “Resistance” was good and healthy for the country. Were you lying then, or lying now?

Sorry Jake, I’m not Black enough for Biden to be my president. (I’m not black btw)

Jake and his fellow travelers are scared shitless that in the end Trump will prevail! I am starting to enjoy this

Dear Jake, who do you admire more, Stalin or Mao? And, do your children still refer to you as fake news?

Anyone who joined the Trump administration because he thought it was a good career move was either naive or delusional. The only reason to do it would be to help save America.

Do these people know what country they’re living in? As for Tapper, he is an alleged news reporter, not a pundit. Pundits shouldn’t be making these kinds of threats, let alone reporters. I’m glad I left the trade.

Tapper began his career as a pet flack for Sarah Brady’s Handgun Control. You can take the boy out of the tyranny, but you can’t take the tyrant out of the boy.

So Jake is going to try Coup d’etat II after his first attempt failed eh?

Let’s see. The primary vocation of the people who are doing the legal fights are lawyers. I gather this from the fact that the they call these legal fights.

When you need a lawyer, you are not going to worry whether he defended Trump. You’re going to worry if he is any good. In fac, many would view lack of character as an asset.

notamemberofanyorganizedpolicital in reply to RodFC. | November 10, 2020 at 4:33 pm

Yes, it’s slander if spoken and libel when printed.

henrybowman in reply to notamemberofanyorganizedpolicital. | November 10, 2020 at 4:39 pm

In the information age, I believe it has sort of morphed into “slander if it’s transient, libel if permanently available on any public medium.”

My takeaway from threats like this is that they’re slowly waking up to the fact that no, Trump isn’t a RINO surrender monkey, and yes, Trump might actually win.

That’s what this bullshit about ‘declaring’ Biden the winner, publicly unsubscribing to Trump, all of the ridiculously obviously false ‘insider’ rumors that Kushner and Melania and others are telling him to concede.

They’re starting to get scared, he is very obviously NOT going to concede without a court ruling, and they know goddamn well just how much fraud they committed.

notamemberofanyorganizedpolicital in reply to Olinser. | November 10, 2020 at 11:24 pm

THEY ARE FRUSTRATED AND BOTHERED….

The fourth estate has declared the outcome. We are not pleased that the deplorable, the serfs deny our consensus.

I’ve been told by an attorney at a national law firm, a partner at that, that if any employee was to publically speak out against BLM in any way, that individual would be terminated on the spot. Straight from the CEO.

Yeah, I believe the left is quite capable.

Bugt how about speaking out for BLM?

For quite some time, Leftists have been trying to criminalize political behaviour. This fool/tool thinks he’s on the correct side. The pendulum still swings.

Similar to earth’s climate, it will self correct. Tree huggers haven’t figure that out either.

Empty threats and posturing from a clown who wouldn’t know the first thing to do were he suddenly faced with a real fight.

I have a long acquaintance with threats. They affect me like a full moon affects Lon Chaney, Jr.

It’s good that his face is well-known. When the killing starts, he’ll be available as a target.

Civil wars are a bitch. Don’t start one.

The problem with making a list is someone else can be creating their own list with your name on it Jake. Maybe you and the rest of your ilk should look into getting a body guard because you never know what can happen.

We’re behind the curve:

The killing will begin soon.

If the demise of a low-life like George Floyd set off the conflagration we saw across our nation (and still see), who will the left throw under the bus as their ‘Franz Ferdinand’? Pelosi? Cortez? They’ll probably whack them themselves.

Why stop with a twofer when Biden could be a threefer?

10 of millions of people in the USA think the election was rigged. If the courts are unable to restore some respectability to voting process, then any peace will be short lived. Disrespected authority only stays in power by use of force.

Tapper is a vile human being.

Well Jake, remember what goes around comes around.

You won’t be difficult to find, Jake. Might be some collateral damage but oh well.

The “Fourth Estate” has been a Fifth Column” for years, decades even.