They poked the bear: Faced massive pushback from Trump supporters.

A few weeks ago, former Clinton Administration official Robert Reich called for a “Truth and Reconciliation Commission” to identify and shame people associated with Trump’s presidency. Now AOC, Jennifer Rubin, and others are actually pushing just such a thing. These are the people who accused Trump of being a fascist.

New blacklist of ‘Trump sycophants’ inspired by AOC being compiled

At the behest of ‘squad’ member and New York Congresswoman Alexandria Ocasio-Cortez, a blacklist of “Trump sycophants”—entitled “The Trump Accountability Project”—is archiving the names of individuals who “elected, served, funded, supported, and represented” President Donald Trump.

“Is anyone archiving these Trump sycophants for when they try to downplay or deny their complicity in the future? I foresee decent probability of many deleted Tweets, writings, photos in the future,” the US representative tweeted Friday afternoon.

On the website’s landing page, it urges urges that “[w]e must never forget those who helped further the Trump agenda,” adding that “the world should never forget those who, when faced with a decision, chose to put their money, their time, and their reputations behind separating children from their families, encouraging racism and anti-Semitism, and negligently causing the unnecessary loss of life and economic devastation from our country’s failed response to the COVID-19 pandemic.”

Is anyone archiving these Trump sycophants for when they try to downplay or deny their complicity in the future? I foresee decent probability of many deleted Tweets, writings, photos in the future

Any R now promoting rejection of an election or calling to not to follow the will of voters or making baseless allegations of fraud should never serve in office, join a corporate board, find a faculty position or be accepted into "polite" society. We have a list.

Many of the people connected to this effort are now deleting tweets and protecting Twitter accounts but there are screenshots:

Who could have seen this coming pic.twitter.com/8cUBQxMHgP

This guy worked for the Obama campaign and then the Department of Health and Human services:

This woman worked for the Pete Buttigieg campaign: 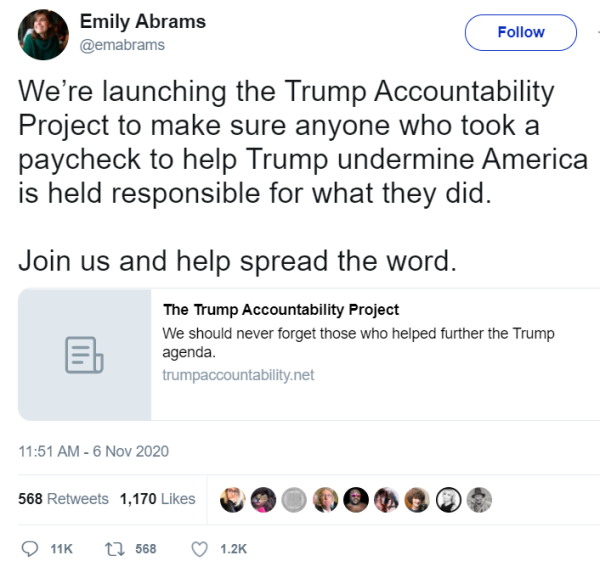 Congratulations, America! You are on the verge of putting people into power that want to scapegoat & blacklist Trump supporters for opposing their authoritarian globalist agenda. If you're a Democrat, pat yourself on the back for enabling actual fascism ?https://t.co/COVCa2ko0Y

The left is speaking publicly and openly about not allowing any conservative to hold public office, a job, or have any form of representation whatsoever. What does that sound like to you?

The left is everything they accuse others of being.

Since we are the majority this McCarthyism is going to fail like a BUYden presidential run.

Majority now means who can stuff ballot boxes and count votes. They have lost the consent of the governed.

Exactly. I can’t stand the sappy-happy talk from some vapid “conservative” writers (see Powerline) who are convinced the GOP will come roaring back in 2022 and beyond. The voting fraud we saw in 2020 will be law very soon.

And don’t count on a GOPe Senate to stop anything. There are too many Republican senators who will roll over so fast their RPM will exceed the finest sports-car ever made (see Collins, Murkowski, Sasse and Romneycare).

Worse, they don’t need to roll over. They or their predecessors in office already did, giving vast powers to government agencies/bureaucracies because they didn’t want to catch heat when their previous programs crashed.

As head of the Executive branch of the government, Biden (or more accurately Harris) can simply order executive-level agencies to selectively enforce existing law, no action from Congress needed.

For an example off the top of my head, Biden/Harris can order DHS to stop or reduce the already inadequate patrolling of the border, and halt construction on the wall while letting existing segments wither away from lack of maintenance.

And then there’s the ATF, who would be instrumental in any attempts to disarm the populace, most of whom are not “boog bois” and will comply just like the Jews of 1930s Europe.

There are more ways out there that the left can screw with the country even without having control over the other branches of government, but this is an internet post and not a doctoral thesis. 😛

Ultimately, if this fraud is permitted to stand, the notion of the US as a constitutional republic is effectively dead.

If I wanted Somalia, I’d move there, but unless this is stopped it’s moving here in the US, and there is no where else on the planet to run to.

notamemberofanyorganizedpolicital in reply to Nohbody. | November 7, 2020 at 3:48 pm

Legal votes decide who is president, not the news media’

I’m aware of that. The entire post was working from a hypothetical final Biden/Harris victory, though I’ll grant you I should probably have put the “hypothetical” statement at the start of the post and not the end of it.

Every one of these fucks needs to be, metaphically, hunted down and a price extracted for this bullshit (loss of jobs, twitter accounts suspended…actually that would probably hurt them more than losing their jobs because then they wouldn’t have any contact with their pretend “online” friends).

As Chuckie Schumer might say, “How many divisions do the American people have?” I guess that we might find out.

The pantomime leading the blind.

I’m old enough to remember leftists angrily tweeting things like “Lists are by nature regressive.” in response to Canary Mission. If AOC becomes president I’m moving to Israel. She is a Corbyn equivalent.

If this sham election is allowed to go through, Trump supporters should flood Biden’s inauguration and shout FRAUD the whole time. They should be treated as they pushed for President Trump’s people to be treated.

These are evil people. Push their projections back on them.

Totalitarian witch of galactic imbecility: “Is anyone archiving these Trump sycophants for when they try to downplay or deny their complicity in the future?”

It’s the same meaning of “reconciliation” you see played out in Egypt time after time: Muslims kidnap, rape, and forcibly marry some Copt girls, Copts get outraged, Muslims demand “reconciliation” to “heal community sentiments” (with an underlying threat that if the Copts keep it up worse will happen to them).

I never could have imagined that vapid airheads and computer nerds would be leading the commies to take over this country.

notamemberofanyorganizedpolicital in reply to Eddie Baby. | November 7, 2020 at 3:54 pm

But both those groups belong to the same sub-set – child molesters and perverts?????

You think you’re not already on it?

The day is coming when those of us who just want to go to work, send our kids to school, but some money in the 401k, go fishing on Saturday and go to work on Sunday are going to forced to act. Many of us served. A lot of us served in combat. We own guns, we know how to use them. We don’t get involved in the rhetoric of the keyboard commandos and the LARPER militias. We do note with concern when elected officials talk about putting us on lists and removing us from public life because of our ideas, and we plan accordingly. Don’t make me get off the couch Sandy. You won’t like it.

Bring it on, you vapid POS. You think we’re always going to turn the other cheek? Wrong again, barista.

I started buying guns and ammo when Obama was elected. Haven’t ever stopped. Yeah this 66 year old White Deplorable plans to fight back.

notamemberofanyorganizedpolicital in reply to scaulen. | November 7, 2020 at 3:52 pm

….and they fall down and tear apart much more easily than iron and concrete statues……just sayin’…..

Start worrying if any of them learn how to knit.

Leftists never fear, or even anticipate, consequences. Of course, with the Republican party to teach them otherwise – well, it’s no wonder they haven’t learned the lesson.

And it starts. They can’t sell their ideas to voters so they cheat and steal the election, then they seek to permanently silence any opposition who might point out their fraud, dishonesty and deception in the future. And they wonder why we opposed their socialism.

I emailed this twit and told her to add me to the list. Then I said to “come and get me”. She may not see it but one of her minions will.

Left will be left. Neo-Nazis. Dezis.

I spent 20 years of my life training to do great damage to other people. I retired from that life and I know the devastation that violence inflicted upon men by other men. AOC and these other people calling for lists now very well what they are advocating.
If your going to send someone after me they are not getting them back in the same state.
I have seen this and studied this and I know how this ends.

May Rubin, Cortez and the Butthead staffers be the first killed in the coming civil war.

No, they’ll be hidden away in a building somewhere far from anything that might even hint at being dangerous.

Or so they think, anyway. They certainly won’t be going out in the open without some attempt at disguise or having armed guards surrounding them. They’re important people, after all.

(Yes, that last line was sarcasm.)

I’m afraid lost my temper with someone on the street today, on my way from synagogue, who cheerfully told me what a great day for the Jews it was because “that antisemite” was out.

It is sad that so many weak minded people bought the bait put out by the MSM and big tech hook, line and sinker. Once upon a time the people in the US were better than this. But back then the Liberals in media had some sense of professionalism and would not so obviously and near totally become the PR arm of the Democrat Party of their day.

Just remember, those lists are being compiled from places like OpenSecrets.org and the FEC. Those same databases contain the names for lists of our own. Get the one for your area now.

Meh. If anyone cares what I’ve said or how much and to whom I’ve contributed, I’d be surprised. But if they do care and want to come look me up to take umbrage with my position they are likely to have an unpleasant experience.