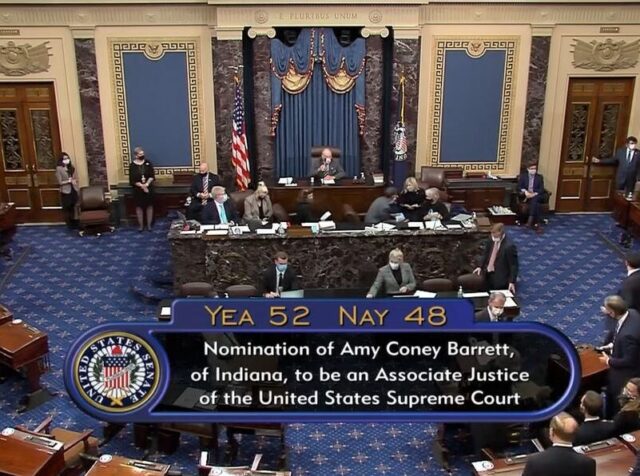 The Senate will hold a confirmation vote for Judge Amy Coney Barrett to the Supreme Court this evening. We expect she’ll be confirmed.

Justice Clarence Thomas is expected to conduct the ceremony swearing in Barrett at 9 PM ET tonight (we’ll have a post on that, too).

Either they were completely boxed in or they realized they screwed pooch on Kav… but this nomination has been very low on the drama in comparison.

What could compare with the excitement and drama of the Harris-Biden campaign stops?

Boy, it is hard to top those. Other than watching grass grow during winter, I can’t think of a thing to top them.

They’ve decided that the ‘answer’ is going to be packing the court. They’ve explicitly said as much.

The only question is what the RINOs are going to do about it.

“what the RINOs are going to do about it….”

Nothing! They’re as corrupt as the democrats – and probably as extortable as biden or hillary clinton.

They may or may not be in any position to do anything about it except win the next election and add another 12 Justices until people get tired of the game.

Barrett’s confirmation, followed by Trump’s reelection will most certainly drive Dem deplorables to even higher levels of crazy.

Oh Schumer, he’s acting like he wouldn’t behave the same way regardless of how the vote goes.

And for Schumer: What exactly is the difference that he sees between the “Right” and the “Far Right”?

I use that term all the time, for progressives. It’s interchangeable.

Which pretty much sums up the Democrats in total.

Man, is anyone else really tired of being threatened by the left?

They are past threats. You can expect violence or vindictive behavior from them for your beliefs like you can expect the sun coming up.

Sometimes an “I told you so” is appropriate, especially for any election fence sitters.

Before Trump won the R nomination I told you, right here on the LI comment pages, that Trump would be the republican nominee and win the election.

Most importantly I told you that Donald Trump would be the most effective conservative president in 50 years and that included Reagan. Some mocked that statement and some of those eventually slinked off with their tails between their legs.

I well remember how one of them told us Trump would appoint judges like his sister because Trump had said nice things about his sister. They were FOS.

And right now as I type we have a vote going that will confirm Mrs. Barret as an associate justice of the Supreme Court, making her Trumps 3rd successful and very conservative appointment.

Four more years are in order.

Ditto, Barry. Some folks here were quite uncharitable in their remarks about we Trump supporters in ’16.

I find this surreal. When Ginsburg passed away I expected nuclear Armageddon from the Communists, and for the GOPe to quickly fold.

That didn’t happen. In fact, the Communists’ efforts against ACB were weak and pathetic (say what you wish about the Communists: they know how to conduct political theater). The cardboard cutout fiasco was particularly lame: even the Joseph Goebbels media was unimpressed.

I suppose the Communists may have grown fat and lazy due to too many easy victories over a milquetoast GOPe. But it possible – just barely possible – that if you stand up to Communism and not look for excuses to be “bipartisan” you can defeat evil? Worth trying again in the future.

That you didn’t get it is a testament to having a president that doesn’t wilt when the battle begins.

There was never a chance in hell that Trump would wilt, that he would not use the power of his office to bring the wayward R’s into line. He didn’t wilt when Kav was pummeled, he stood by him 100% and that set the tone for Barret.

RGB bet the farm and lost. Betting has consequences. You need to know when to hold ’em and when to fold ’em.

(smiling) Ha ha. That’s a good one. You must be an artist.

Obummer’s ego got in the way, too. He was riding the crest of his “pen and phone” wave and thought negotiating any kind of deal with the Senate GOP beneath him. He could have encouraged Ginsburg to retire and nominated a replacement they could hold their noses and confirm. But he didn’t and whatever voodoo magic was keeping RBG shambling forward finally ran out in the final stretch.

I have long awaited RGB to be replaced with someone who loved our Constitution, and would defend it.

While we don’t know how things will ultimately go with ACB, there is certainly more hope that the laws will be decided based on firm principles instead of politics. This should be the bar for any SCOTUS nomination. All we have ever seen from the left are ideologues who make laws from the bench, to push political agendas.

A much needed win just before the election! Congratulations Justice Barrett!

Great jobs all around — Graham, McConnell, and fifty other GOP Senators.

RBG’s death and this nomination just plain took the wind out of the Democrats’ sails, didn’t it?

Even their threats of post-election rioting have begun to sound hollow.

The wounded beast roars the loudest just before it falls down.

Dems will try to pack the court now. Republicans should pass an amendment fixing the court size.

They could do it easily enough – just propose the amendment and propose packing at the same time.

Dems will be forced to support the amendment.

Of course the surrender monkeys in the caucus would find a way to make sure it didn’t happen.

An amendment requires 2/3 of each house, and then 3/4 of the state legislatures. The Republicans don’t have 2/3 of the senate, let alone the house. If they propose both the amendment and the packing, the Dems will simply vote against both. Then when/if they take the senate they pass the packing.

2/3 of the states may call for a constitutional convention and the proposed amendments are passed with 3/4 of the states approval. Does not require approval by the legislature.

Has never happened this way,

Did Collins remain irrelevant? Here’s to Maine getting rid of a petulant servant of socialism.

Nope. It was 52 yeas and 48 nays strictly along party lines. The Republicans were respectful and stayed in the chamber while the vote was happening while each democrat marched up to the clerk, made a thumbs down gesture, and then disrespectfully left the Senate floor like petulant little babies having a temper tantrum because they didn’t get their way.

Well, sorta. A rino voted with her natural party, guaranteeing her election loss. Why would any R vote for Collins?

If Trump wins November 3, it would be a great prank for him to announce he wants to add a few more justices.