It’ll be all about Trump, but someone needs to bring up Harris’s record as a prosecutor in California. 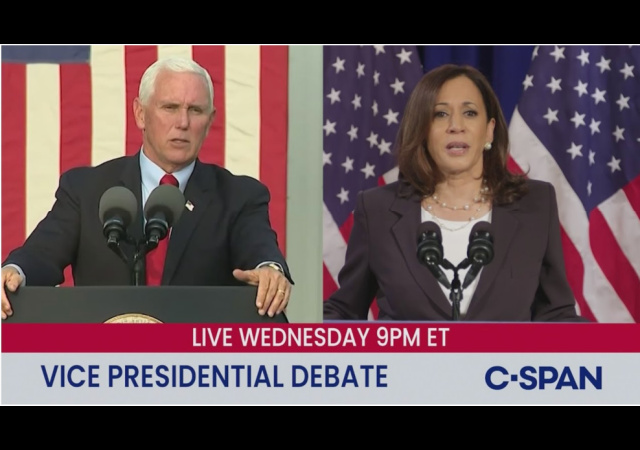 Mike Pence and Kamala Harris will debate tonight at 9 p.m. ET in Utah.

People think many will watch this since President Donald Trump is recovering from COVID-19 and others in the White House test positive for it.

The debate is from 9-10 p.m. ET at the University of Utah in Salt Lake City. It will have nine segments, 10 minutes each. There will be no commercial breaks.

USA Today’s Washington bureau chief Susan Page will moderate the debate. I wonder if she’ll do a better job than Chris Wallace.

The vice presidential debate does not swing an election. But this one might affect the election a little due to the economy, Trump’s COVID-19 diagnosis, etc.

But still. We all thought everyone would watch Trump debate Joe Biden. Way more people watched Trump and Hillary Clinton’s first debate in 2016.

Vice Pres. Mike Pence and Sen. Kamala Harris take stage in Salt Lake City for the vice presidential debate. The candidates are foregoing the traditional handshake due to COVID-19 and are divided by plexiglass. https://t.co/rJxLDwoEis #VPDebate pic.twitter.com/ehinlbDKPk

“The American people have witnessed what is the greatest failure of any presidential administration in the history of our country,” Kamala Harris says in response to first question of #VPDebate on how a Biden administration would handle COVID-19. https://t.co/rJxLDwoEis pic.twitter.com/LWeYEA9iOR

VP Pence to question on why U.S. COVID-19 death toll is higher than any other nation; cites China travel advisory as early intervention: "I want the American people to know that from the very first day, Pres. Trump has put the health of America first." https://t.co/rJxLDwoEis pic.twitter.com/CF80O496pD

VP Mike Pence on the Biden/Harris plan for covid-19:

Harris Says NO to Vaccine

Sen. Kamala Harris on vaccine: "If Donald Trump tells us that we should take it, I'm not taking it." #VPDebate pic.twitter.com/4WLvBW7Omq

"The fact that you continue to undermine public confidence in a vaccine, if a vaccine emerges during the Trump Administration, I think is unconscionable. Senator, I just ask you, stop playing politics with people’s lives."#VPDebate pic.twitter.com/DPHV4CY1kP

Pence is a Gentleman

Mike Pence is so genuine and likable.

Mike Pence tells Kamala Harris he wants to congratulate her on "the historic nature of your nomination" #VPdebate https://t.co/K93TgPwUao pic.twitter.com/UCLMC7Ov9H

“Senator, I want to thank you and Joe Biden for your expressions of genuine concern. I also want to congratulate you … on the historic nature of your nomination.” https://t.co/rJxLDwoEis #VPDebate pic.twitter.com/xWDKMofCbP

"The American people have a president who is a businessman, a job creator."#VPDebate: Mike Pence defends Trump against tax allegations: "[he's] released literally stacks of financial disclosures." https://t.co/VlT7z8drtO pic.twitter.com/ZDwF5gEc1e

Joe Biden: “The first thing I would do” is raise taxes #VPDebate pic.twitter.com/Z1UKXGGJ1S

Someone remind Kamala that Biden wants to ban fracking.

Mike Pence calls out Kamala Harris for lying about her record on fracking:

“There is no question I’m in favor of banning fracking.”pic.twitter.com/TOx4UFzSiA

#VPDebate DAGGER… "You were the first Senate co-sponsor of the Green New Deal. And while Joe Biden denied the Green New Deal, Susan, thank you for pointing out the green new deal is on their campaign website." — VP Joe Biden pic.twitter.com/BMeFfMsjqw

Biden wants us to cower to China.

#VPDebate "Lost the trade war with China? Joe Biden never fought it. Joe Biden has been a cheerleader for communist China for the last several decades." — ouch, that's gonna XI a mark. pic.twitter.com/0LqIKG4M4W

Kamala Harris is flat out lying about the Russia bounty story.#VPDebate

Regarding bounties: "a detailed review of all available intelligence has not been able to corroborate the existence of such a program."https://t.co/FaiyHy6Wdb

Will the moderator ask about packing the court? Will Harris actually answer a question with a straight answer?

Pence: “The American ppl deserve an answer: are you and Biden going to pack the Supreme Court?”

Pence, not the moderator Page, is forced to ask if Biden-Harris will pack the court. Harris dodges. Pence presses. Harris smiles throughout. Most important part of the debate. Harris still won’t answer two minutes later. Page forces the debate to move on. This is a joke.

Pun intended, you be the judge, folks. Did you hear a yes or no answer from Kamala Harris about whether a Biden/Harris administration would pack the Supreme Court? #VPDebate (1/2) pic.twitter.com/V3tPeA2FzG

Kamala won’t answer directly any questions about the Supreme Court either.

The Constitution gives Pres. Trump the power to appoint judicial nominees as long as he is President.

There is nothing in the Constitution that prevents a Supreme Court vacancy from being filled, "regardless of how close to an election it opens up."#VPDebate

Thanks to Kamala Harris, anti-Catholic bigotry is alive and well in the U.S. Senate https://t.co/D6xvl1WNxR #VPDebate

In Pence we trust

notamemberofanyorganizedpolicital in reply to gonzotx. | October 7, 2020 at 10:25 pm

Wake me up when Kamala – the Heidi Abromowitz of politics is finished lying…….

“USA Today’s Washington bureau chief Susan Page will moderate the debate. I wonder if she’ll do a better job than Chris Wallace.”

No, but it will be a close call. Talk about a race to the bottom!

At any rate, the post-debate spin by the Joseph Goebbels media is pretty standard after any VP debate and is boringly predictable: “With time running out on the Republicans’ dwindling chances, the Republican VP candidate likely didn’t do enough to turn the race back in the GOP’s favor.”

I mean when you have nazi Nan’s book writer and please tell me why Republicans continue to agree to these evil people?

First reaction: You can see the pre-recorded tape whirling behind Harris’s eyes on the first question, where she didn’t answer *anything* I suspect the questions will go:
Ms. Harris, the Trump administration is terrible, attack them.
Mr. Pence, you’re terrible. Defend yourself.
(repeat)

Ms. Harris, is it true that you believe that your shit does not stink?

Answer: “That is a non-issue because I wear a CDC mandated clothes pin on my nose to stop the spread of the noxious fumes I produce when I defecate. If only Mr. Trump would follow the CDC recommended guidelines. He is such a Nazi.”

Harris is quick with the smirk. Biden obviously gave her his tricks which he practiced ad nauseum in the 2012 debate with Ryan.

Looks like she was given the questions before hand.
Moderator is partisan.

Nobody seems to be answering the moderator’s questions.

“VP Pence to question on why U.S. COVID-19 death toll is higher than any other nation”

Because we’re the most populous nation that isn’t deliberately under-reporting cases or incompetent to track them? Because we, as a nation, decided that gathering in crowds of thousands for co-opting a protest of police brutality to #resist was important enough to break a nationwide lockdown at a critical time.

“Ms Harris, Joe Biden’s a little off, you know, a little funny in the head. Have you and Joe had a conversation about his health?”

And then off she goes NOT answering that question.

“Well now, what happened is… ahm… one of our base commanders, he had a sort of… well, he went a little funny in the head… you know… just a little… funny. And, ah… he went and did a silly thing… Well, I’ll tell you what he did. He ordered his party… to attack our country and our Constitution”

Does Romney have a sharp knife to stab Pence in the back?

K. Harris is not very good at the mechanics of actually campaigning. On paper she would seem like a home run VP selection, Female of color, Attorney, Prosecutor, CA Attorney General, US Senator.

It turns out that she is a paper mache candidate. From a distance looks like the real thing, up close reveals the fraud. She didn’t benefit from her failed run to become the d presidential nominee.

A nice guy like Pence is slicing pieces of her hide and it seems apparent that Harris just wants it to stop. Utterly ineffective performance by Harris, IMO.

notamemberofanyorganizedpolicital in reply to CommoChief. | October 7, 2020 at 10:27 pm

What you expect from the Heidi Abromowitz of politics descendant of slave owners………?

Roasting her gently so the flames won’t hurt. But we all see the grill marks.

After an hour I had enough of Harris’s arrogance, her smirk, and her maddeningly nasal voice. I turned it off. Taking out the trash was higher on the evening’s priority list.
.

Please, please, PLEASE give us another debate like the first Presidential debate. ONly make it a Thunderdome style debate. Biden can have his Corn Pop chain and give Trump a baseball bat. The VP debate was a yawner.

Harris regurgitated lie after lie after lie. Pence tried to push back, but he has all the fortitude of jello. By the time he finished his lead-in to the answer, you were already nodding off. Harri still refused to answer the paramount questions concerning the position and plans of the Biden administration, except to say that everything would be free.

Society has changed. Politics have changed. We have a major political party which is actually waging violent war upon the rest of the citizenry. And, half the population wants their politicians to stand tall, shoot straight, ride hard and speak the truth. Pence just isn’t it.

This was a monumental waste of time.

It was my opinion that Trump should have dropped Pence for the 2020 race, and replace him with someone with a lot more fire in the belly. Jim Jordan comes to mind, but there are others. Who’s got the stones to carry on, in 2024, what Trump started.

Now the left wing media is accusing Pence of “mansplaining”. Maybe if she weren’t so stupid, he wouldn’t need to explain anything to her.

At least he didn’t look at her and say, “Kamala, you ignorant s**t…”. Though that would have livened up the debate considerably.

Nice cultural reference Chevy Chase on SNL circa 1970…something….. I ain’t saying you are old but I am too young to have watched it live…thank goodness for YouTube.

Old is a state of mind. But, physically, I’m approaching a half millennium in dog years.

After watching the debate, the quote just seemed so… appropriate.

‘Old is a state of mind’, maybe. Mentally and physically on my first step I am still 18, that next step though…

Wonder if Pence left just as bad a taste in Kamala’s mouth as old man Jimmeh Brown did?