The first settlement with a university to reflect President Trump’s Combatting Anti-Semitism Executive Order, the agreement sets an important precedent in the fight against campus Jew-hate.

Almost a year after embarking on her legal battle, NYU graduate Adela Cojab and her lawyers have won an important victory in the fight for Jewish civil rights on college campuses.

As a student at New York University in 2018, Adela Cojab was active and highly visible in the Jewish and Zionist communities on campus. Her studies focused on the Sephardi Jewish diaspora, she served as president of the pro-Israel group Realize Israel, vice-president of AEPhi sorority, Senator for Jewish and International Students on NYU’s University Senate, and official representative of Jewish Students for the United Nations’ Economic and Social Council (ECOSOC). 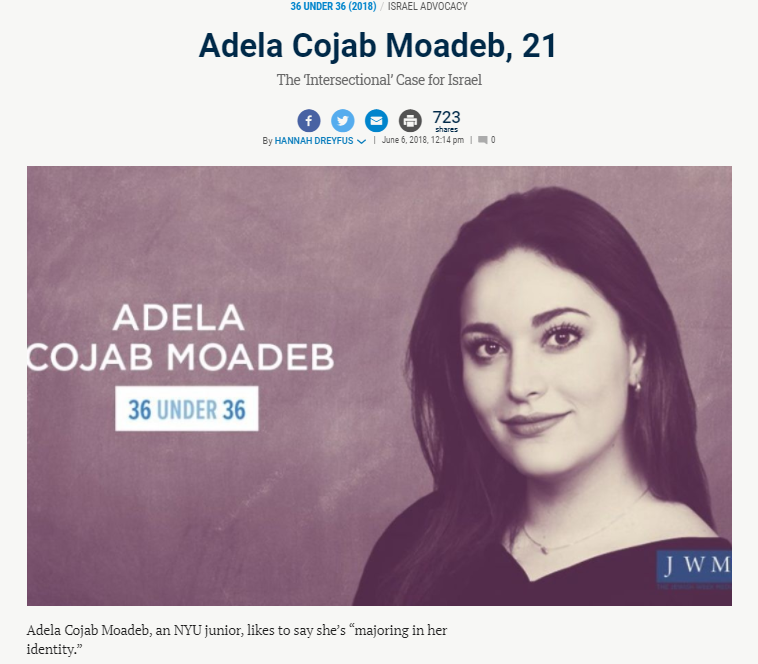 But, as Adela experienced firsthand, NYU has long been a hotbed of anti-Israel and anti-Semitic activism. (We’ve covered some past examples, including when NYU Students for Justice in Palestine (SJP) targeted Jewish students for “dorm-storming” and eviction notices; when SJP tried to have NYU’s Israel campus shut down; and when Lisa Duggan, a professor in NYU’s American Studies Department and incoming President of the American Studies Association, hosted an anti-Israel conference at the university.)

When the spring 2018 semester saw 53 out of 360 of NYU student clubs boycott the school’s two pro-Israel student groups; the proposal of yet another in a long series of anti-Israel resolutions in student government; and members of NYU’s SJP and Jewish Voice for Peace (JVP) storm Realize Israel‘s “Rave in the Park” party, encourage others to report the event, assault a pro-Israel student, scream insults and epithets at the Rave’s guests, and set an Israeli flag on fire, Adela was deeply dismayed. 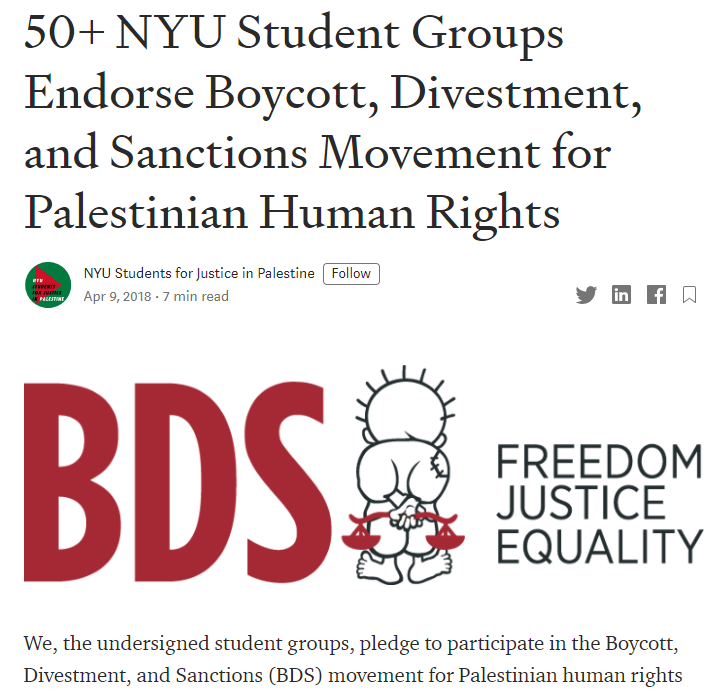 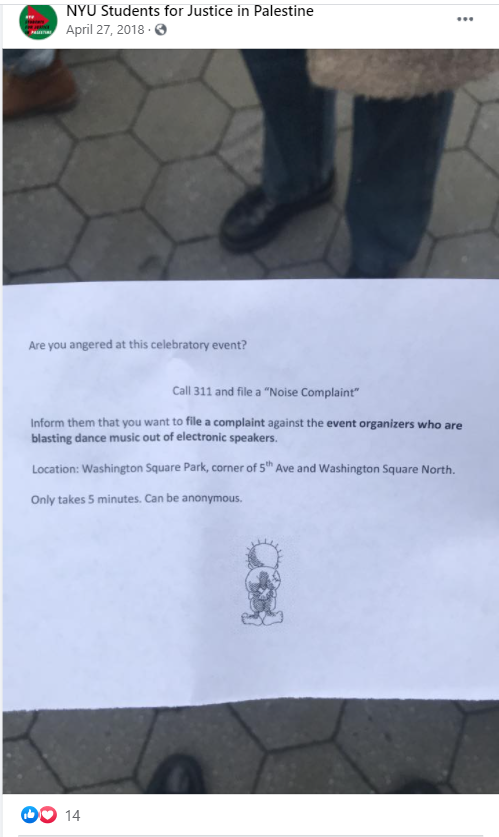 Adela complained to the NYU administration, pointing out that Jewish students felt physically threatened on campus, and asked for the university’s help in mitigating hostile anti-Israel behavior.

But as Adela explained, while NYU’s administrators disciplined the two students who had burned the flag and committed assault, they did not address SJP or JVP’s behavior as a whole. They also reportedly instructed Adela “not to post on social media” and to “lower” her “own presence and the presence of my community…”

So, when the university administration even gave SJP the 2019 President’s Service Award—bestowed “to recognize students and student organizations that have positively impacted the NYU community through significant contributions to either community service and civic engagement or student leadership and campus programming”—Adela had had enough. A few weeks before she was due to graduate, Adela and her lawyers—Neal Sher and Joel Siegel—filed a Title VI complaint against NYU, prompting the Department of Education (DoE) to launch an investigation into anti-Semitism at the school.

Mere months later, Adela climbed on stage and stood confidently behind a podium at the 2019 annual Israeli American Council conference. In a strong, clear voice, she described her experiences with anti-Semitism at NYU, and the university administration’s failures to protect its Jewish students. Standing alongside her on stage was President Trump.

Only a few days after Adela’s speech, the president signed a landmark executive order including Jewish students as a protected class under Title IV. Crucially, the EO also defined anti-Semitism according to the International Holocaust Remembrance Alliance (IHRA) classification, which includes bigoted anti-Israel behaviors common to groups involved in campaigns to boycott or demonize Israel.

Now, Adela’s determination has paid off. Earlier this week, Adela’s allies at the Louis D. Brandeis Center for Human Rights Under Law (LDB) issued a press release explaining the settlement they reached with NYU:

The NYU settlement is the first agreement with a university to reflect the executive order. The agreement also contains a notable and unusual provision requiring NYU to include, in its anti-harassment policy, a “statement of the University’s commitment to academic freedom and free speech.” This provision, similar to language included in OCR’s anti-Semitism agreement with Duke University earlier this year, reflects OCR’s commitment to freedom of speech even at private universities that are not otherwise bound by the First Amendment to the U.S. Constitution.

The following is a statement from Alyza Lewin, president of the Louis D. Brandeis Center for Human Rights Under Law about this landmark development:

“The NYU OCR Resolution Agreement confirms the importance of the Executive Order. To effectively combat anti-Semitism, universities must first be able to define and recognize anti-Semitism in all its forms. Unfortunately, campus anti-Semitism is spiking, in part, because administrators don’t understand contemporary anti-Semitism and, therefore, can’t properly identify it when it happens. This resolution does not infringe on speech in any way. Contrary to what some will falsely claim because they misunderstand the law or hope to excuse the anti-Semitism they wish to perpetrate, it will not prohibit or penalize protected speech. The resolution merely requires NYU to utilize the IHRA Working definition as an educational tool, to enable NYU administrators to identify anti-Semitic conduct. The definition will now become part of NYU’s formal anti-harassment policy and training. This is an extraordinary development, a victory for all Jews, and a defeat of anti-Semitism that will undoubtedly improve the climate on NYU’s campus. Other universities that are serious about combating anti-Semitism should follow suit and similarly incorporate the IHRA working definition into their university policies.”

The types of anti-Semitic behaviors cited in Cojab’s complaint, that will now not be tolerated, include harassment, assaults, battery and vandalism.  Cojab’s complaint documented numerous incidents including many that occurred at a pro-Israel celebration at Washington Square Park where a microphone was grabbed out of a speaker’s hands and Jewish students were assaulted. Two students were arrested for committing these acts.

Hopefully, Adela’s settlement will lead to university administrators’ increased awareness and concern about anti-Semitism and anti-Zionism on college campuses; at the very least, it should serve as a signal to institutions of higher education that they can no longer condemn some bigotries while brushing others under the proverbial rug.

Note: This post has been edited after publication to clarify the legal counsel representing the student.

It’s sad that things have deteriorated to this point, such that American Jews and supporters of Israel have to resort to filing lawsuits in order to protect their rights against the onslaught of gleeful, unrestrained Jew-hate, Israel vilification and general pro-jihadist propaganda and dhimmitude that has permeated academia, the mainstream media, and, of course, the vile Dhimmi-crat Party, itself.

If Jews started beheading their “oppressors ” like the religion of peace, I suspect that universities would immediately gain a strange newfound measure of respect for Jews & Judaism..
.

Your comment echoes a line of dark comedy that I had pondered — “If Jews began beheading hostages, flying airplanes into buildings, driving trucks into crowds, shooting up concert halls, slaughtering cartoonists and priests, etc., they might become as popular with Dhimmi-crats and European Leftists as Muslims are.”

They need to declare conservative speakers as a protected class at universities; they certainly represent a minority….

Education institutions are one of the TOP generators of racism and hate crimes in this nation.

NYU turned into an affirmative action diploma mill. Ask any employer about the characters who apply for jobs with NYU on their resume. It’s pathetic.

notamemberofanyorganizedpolicital in reply to TheFineReport.com. | October 8, 2020 at 8:18 pm

Sham, unearned degrees, are a huge problem at most universities today. This costs business dearly.

Looks like the “settlement” is a bunch of words. That and $5 will get you a Starbucks–in my town.

Look for nothing much to change.

The door is open for more litigation.

NYU was just following cuomo’s lead. He’s a lying scum bucket. Just told the Jews he’s the best friend they’ve ever had in a governor.
My apologies to scum buckets though. I didn’t mean to make them feel bad by comparing them to cuomo.

No worries. Should Biden win the election this will all go down the memory hole as will the executive order protecting Jews. We are an election away from lies and obfuscation of the facts being enshrined as US policy in many areas. With Biden/Harris no discrimination with be too vile as it will all be classified as being “anti racist” and enhancing diversity. Violence against disfavored groups is not far behind. Why most Jews fail to see this is beyond me.

SteveW’s October 9th comment is right-on. If Biden / Harris win the election, which now appears likely, the progress made by the Department of Education in combating campus Anti-Semitism will come to a screeching halt. Campus persecution of Jews and demonization of Israel will reach new levels of intensity under the Biden / Harris Administration.