Yale psychiatry professor Bandy Lee said the woman seen nodding in support of Trump was being used for “visual manipulation” as part of a “mind-controlling technique.” 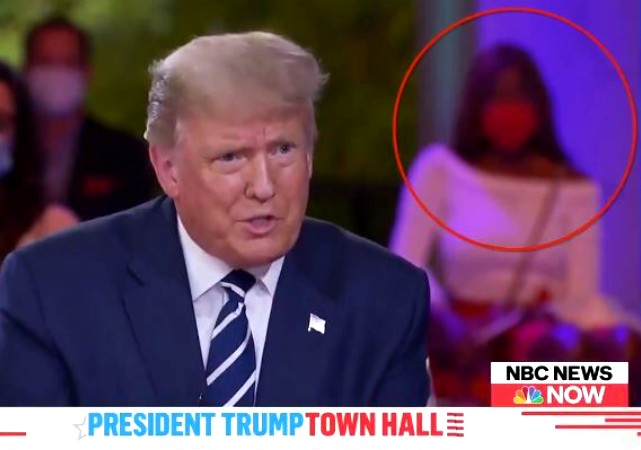 If you watched NBC’s town hall event featuring President Trump on Thursday night, you probably noticed a woman in the background who at certain points nodded in approval at the answers Trump gave to the questions that were asked, including the ones from combative town hall moderator/Biden stand-in Savannah Guthrie.

For those who missed it, here is the “nodding woman” at one point giving a nod and a thumbs up to an answer Trump gave on the economy:

The lady nodding her head agreeing with @realDonaldTrump had to just drive all the Democrats watching insane. ?? pic.twitter.com/Ym8l3MdIi7

Here’s another clip where she nodded approvingly at Trump denouncing white supremacy and Antifa:

NBC News and Savannah Guthrie might think that ANTIFA is just a group of peaceful protestors.

But this lady behind President Trump and the rest of America understands that ANTIFA is a dangerous, violent, extremists organization. pic.twitter.com/ThqHkTmPin

At the beginning of the town hall, Guthrie noted that the voters in attendance were a mixture of Biden supporters, Trump supporters, and undecided voters. With that in mind, you wouldn’t think it’d be a big deal to those watching at home to see the occasional positive reaction from the woman to Trump’s responses.

But Democrats, the mainstream media, and Never Trumpers were so angered by the woman’s reactions and apparent support for Trump that they set out on social media in droves to find out who she was in an attempt to shame her.

“Principled” Never Trumper Tom Nichols, a self-styled “expert” on political matters, led the way in wanting to find out “who put her there,” as though she wasn’t there by choice:

I would love to know who put her there

A few minutes later, he demanded his friends in the media find out who the nodding woman at the “undecided” voter town hall was, apparently unaware of what Guthrie said at the beginning about how there were a mixture of voters in attendance – including Trump and Biden supporters:

Journalists, if you don’t find out who that woman is nodding behind Trump at an “undecided” voter town hall, then I don’t know what you’re getting paid for

NBC News “journalist” Howard Fineman was not pleased with the woman in the background either and suggested she was planted by Trump:

How did #Trump get that woman nodding for him at all times in the background?

“View” co-host and unhinged liberal Joy Behar declared on the program Friday that she wanted to make the “human bobblehead famous”:

Yale psychiatry professor Bandy Lee, who in the past has actually briefed Democratic members of Congress on her (uninformed) opinions regarding Trump’s mental health, said the black woman was being used for “visual manipulation” as part of a “mind-controlling technique”:

There is visual manipulation once again—a prominently seated black woman is nodding her head constantly to his talking points. This is exactly the mind-controlling “technique” I was looking for, and there it is.

Liberal comedian Sarah Cooper thought she hit one out of the park with this sizzling hot take about the woman’s appearance:

A parody of Taken about a black woman who follows Trump around nodding at everything he says. It’s called… Token

CNN’s Brianna Keilar huffed about the “nodding woman,” revealing her name (Mayra Joli) and reporting that she is a former Congressional candidate and Trump supporter. The big issue, Keilar seemed to be suggesting, was that the woman had been invited to a town hall Keiler falsely claimed was “billed as an audience of undecided voters”:

CNN just did a whole segment about the nodding woman from the Trump townhall. They acted like it was a big scandal that she was a Trump supporter despite the fact that Savannah Guthrie said last night that the audience is a mix of Trump, Biden, and undecided voters. pic.twitter.com/R1cAiUQnWH

In spite of all the protestations about how Ms. Joli shouldn’t have been there because she wasn’t an undecided voter (even though in reality the town hall was billed as having a mixture of voters in attendance), I think it’s pretty obvious what their real issue was with her being in the background and expressing her support for Trump:

This is gross. Well-off white guy leads pack of other frenzied well-off white people to hunt down and go after black woman because she expressed a view they don’t like— by simply nodding her head. https://t.co/U4ZDn3Gg6f

How dare a black woman think differently, right? Even worse, how dare she do it in front of an audience of millions, some of whom might be influenced by her show of support?

The best thing about all of this? Despite attempts by the Usual Suspects to shame her, silence her, and make her go away, Ms. Joli was not quiet on Friday. Instead, she did interviews. In the below clip, she alleged NBC may have deliberately sat her where they did under the assumption she did not support him and would disagree with him:

Wow #NoddingWoman says she thinks NBC switched her seat to have her sit behind Trump because she was black and would be disagreeing with him. Wrong hypothesis! She says MLK wanted Americans judged by their character and not skin color. https://t.co/myE4bvl7yz

Ms. Joli is the Democrat party’s worst nightmare come true: A minority voter who doesn’t toe the liberal line. There are many more black and Latino voters out there like her in key battleground states like Florida, enough to give Democrats big headaches on election night – and beyond.

Quick, someone explain “projection” to the Dems/Progs! Start with the dinosaur media, a wholly owned subsidiary of the Democrat party.

Democrats are not just terrible people, they are evil.

Bandy Lee only leads credence to my belief that psychiatry is not science. It’s nonsense.

notamemberofanyorganizedpolicital in reply to The Friendly Grizzly. | October 17, 2020 at 11:24 am

The lyin’ MSM are just distracting from this.

It also proves that Bandy Lee MD is deranged in serious need of psychological help.

A parody of Taken about a black woman who follows Trump around nodding at everything he says. It’s called… Token

To give credit where it’s due, Slow Joe said it better with his “then you ain’t black” line.

Is there ANYTHING that doesn’t get these snowflakes panties in a bunch?
What a frightening world they live in.

The best real estate score Trump ever made was squatting in the empty space between Bandy Lee’s ears.

Joy Behar – one of the most execrable persons on the planet.

Put that lady on the Sunday shows!

Looks like NBC made a mistake in its seating assignments and let Trump look good. Can’t have that! Notice the applause when he was complimented for his smile, too. Guess they should have cut the audio.

Bandy is a lunatic.

Upset it wasn’t a %100 Leftist show?
Surely they protest too much

And having a person of color as a Trump supporter is against their rules and must be stopped.

Conservative, black, and an immigration attorney. How DARE she? ?

NBC originally had a white woman sitting in that spot and shortly before the debate began, moved Mayra Joli (the black woman) into that spot assuming she was pro-Biden. NOQ Report has an excellent article on it.

Looks like NBC has learned a lesson about the word “assume” that those who served in the military know all about.

I can just picture Ms. Joli’s eyes lighting up at the unexpected opportunity to help present NBC as the leftist fools they are.

No Matter What Happens in the Election, the American Media Will ‘Never Be the Same After This’ — ‘It Cannot Continue This Way’

opto Jason Evans
2 hours ago
I agree. Our Idaho PBS is “helping” during the COVID “crisis” with learning (indoctrinating) at home. I actually watched some of that programming to see what they were putting out AND it should scare the hell out of parents. I’ve written my governor and legislators local and federal about this and I hope others take a minute to do the investigation and send their concerns on as well.

Anyone know more about this? Should be checked out.

CapeBuffalo in reply to notamemberofanyorganizedpolicital. | October 17, 2020 at 2:54 pm

I just took a look at local NPR ( PBS radio comrade) show listing. Would you believe five straight shows all with pro Left/Democrat or harsh negative Trump/Republican titles.
No fair and balanced here.

Of course they are going after her because of the potential outcomes:

-Alternative 2: It’s an opportunity to ruin another real person’s life because of political incongruity.

This is textbook Marxist revolution BS.

If it’s really mind control, I just hope it works!

The Dems and their Facebook and Twitter and Google buddies are using every dirty trick in the book, and quite a few new ones. The Republicans need to step up their game and outperform the Dems’ dirty tricks.

They do get wee wee’d up don’t they? I thought sweet little Samantha Guthrie was more than enough to counteract any “nodding woman” in the background. In fact Samantha came on like a woman who’d just seen her husband come in the door at 0400 reeking of alcohol with lipstick on his jockey shorts–or worse.

Hustler magazine’s publisher declined to comment on BandyBritches uncommon interest in other women though the Falwells offered additional contact information.

Many people I know nod when they agree with something someone says or does. Perhaps this is one of those times.

“There is visual manipulation once again—a prominently seated black woman is nodding her head constantly to his talking points. This is exactly the mind-controlling “technique” I was looking for, and there it is.” — Bandy X MD

Typical leftists — callin’ the kettle. I paraphrase: “The greatest enemy of the state is not the lie, it is the Truth.” Josef Goebbels

How dare someone be persuasive in our propaganda event carefully crafted to convince you Trump sucks.

Really, if we can’t be persuasive with control of the questions, the questioner, the venue, editing, direction and lighting, selection and placement of the audience, and commentary around the whole thing, who is someone we placed in the audience to represent a different message?

A wink is as good as a nod…