“The Senate’s floor schedule will not interrupt the thorough, fair, and historically supported confirmation process previously laid out by Chairman Graham” 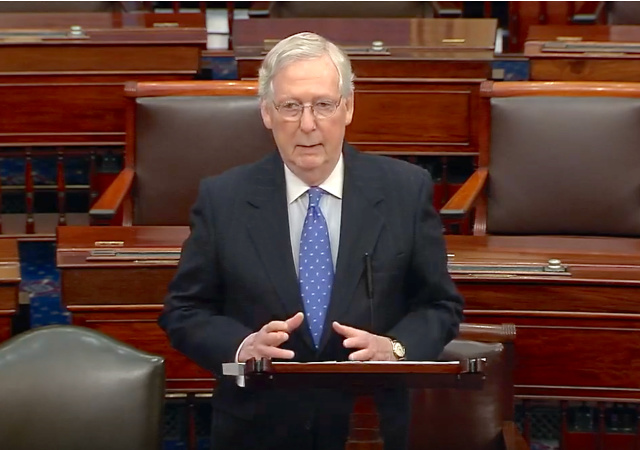 This decision, however, does not impact the Senate Judiciary Committee.  They will move forward with Amy Coney Barrett’s Supreme Court nomination hearings on October 12, 2020.

McConnell said the Senate will not return until Oct. 19 and will only meet in pro forma sessions for the next two weeks, allowing a smaller number of lawmakers to be on Capitol Hill. Previously-scheduled floor activity will take place after Oct. 19.

. . . .  Sen. Ben Sasse (R-Neb.), another member of the Judiciary Committee, was also at the White House last week. Though he tested negative, he still plans to work remotely from Nebraska until Oct. 12 as he receives further testing.

. . . . The absence of the four Republican lawmakers cuts down McConnell’s normal 53-47 majority to just 49 senators.

The delay and diagnoses come as the Senate GOP looks to swiftly confirm Barrett to the Supreme Court to fill the vacancy left by the death of Justice Ruth Bader Ginsburg, but McConnell said the move will not impact the start of her confirmation hearings, which are set to begin on Oct. 12.

“The important work of the Senate’s committees can and will continue as each committee sees fit. The Senate Judiciary Committee will convene on October 12th as Chairman Graham has scheduled to begin confirmation hearings for Judge Amy Coney Barrett’s nomination to the Supreme Court. The Senate’s floor schedule will not interrupt the thorough, fair, and historically supported confirmation process previously laid out by Chairman Graham,” he said, referring to Sen. Lindsey Graham (R-S.C.), the Judiciary panel’s chairman.

“Since May, the Judiciary Committee has operated flawlessly through a hybrid method that has seen some Senators appear physically at its hearings while other members have participated virtually. The Committee has utilized this format successfully for many months while protecting the health and safety of all involved. Certainly all Republican members of the committee will participate in these important hearings,” McConnell continued.

Graham confirmed in a separate statement that the hearings will not be delayed.

Senate floor proceedings will be postponed until October 19th. The @SenJudiciary confirmation hearings for Judge Barrett’s nomination to the Supreme Court will convene on October 12th as scheduled by Chairman Graham. My full statement: pic.twitter.com/7ThKZPJBZG

Getting ACB seated should be the Senate’s main concern

What if even more and more R-Senators get infected?

Proxy votes? Tele-voting? Hazmat suits? Social distancing with a schedule for each Senator to come onto the floor and vote with most of the chamber empty?

If Americans can work from home, go to school from home, and even have doctor’s appointments from home, I think we can figure out how to record the open and public votes of senators in some fashion.

As long as they aren’t dead they had better vote. After the vote they can do what they want.

Oh, and keep those clown act visitors who usually show up, thanks to Dem staffers, out of the room. No need for more bodies to raise the risk level.

Graham confirmed in a separate statement that the hearings will not be delayed.

Judge Barrett has already passed one confirmation hearing. There should be no cause to deny her seat at the Supreme Court.

That said, wear a mask if they reduce anxiety and social stigmatization. Hold it in the open, circulating air to reduce the probability of aerosol and droplet transmission. It didn’t help Trump et al, and one senator who was masked. It’s likely that the transmission modes in different contexts and the effectiveness of popular mitigation strategies have been mischaracterized.

In fact, it was a doctor from Weill Cornell Medical Center who reported that the observed transmission modes were forced expulsions, thus PPE protecting doctors, nurses, and caretakers, fecal aerosolization in poorly constructed facilities, and manual contact, thus obviating the value of masks in general use, and confirming the value of good hygienic practices.

It would be ironic if Covid-19 sunk this.

It would be McConnell’s treachery if it did.

So don’t bother with hearings. Just do the vote.

Protect Mitch McConnell and Lindsey Graham from contaminated covid nasal swabs. Democrats attempted to sicken Amy Coney Barrett to delay and derail her confirmation but only managed to get the President and a few Senators.

Gotta say- I smile every time I think about this.