Judge Amy Coney Barrett: ‘I Believe in the Rule of Law, Place of the Supreme Court in Our Nation’

Judge Amy Coney Barrett: ‘I Believe in the Rule of Law, Place of the Supreme Court in Our Nation’

“I believe Americans of all backgrounds deserve an independent Supreme Court that interprets our Constitution and laws as they are written.” 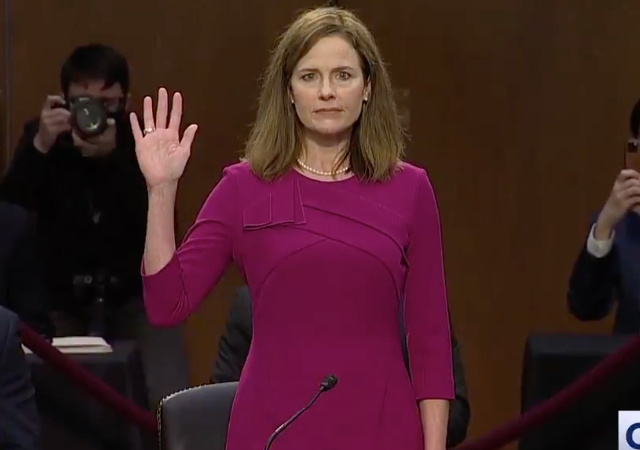 We finally got to hear from Judge Barrett after hearing the opening statements from the senators. I think I speak for us all when I say that I would rather hear from her than any of the senators.

Here are some clips. I published her full opening statement in the live post.

"I’m used to being in a group of nine: my family. Nothing is more important to me and I’m very proud to have them behind me." pic.twitter.com/DV4M743H1o

Courts have a vital responsibility to the rule of law, which is critical to a free society. But courts are not designed to solve every problem or right every wrong in the public life."

"I'd be the only sitting justice who didn't attend school at Harvard or Yale but I'm confident Notre Dame could hold its own and maybe I could teach them a thing or two about football." pic.twitter.com/3EkwfVDUP3

ACB: “I believe in the power of prayer.”
pic.twitter.com/GG6rXLdVVA

Amy Coney Barrett: "I believe Americans of all backgrounds deserve an independent Supreme Court that interprets our Constitution and laws as they are written. And I believe I can serve my country by playing that role." https://t.co/uScvfX9o80 pic.twitter.com/mLeWUQZFFb

Judge Barrett: “the policy decisions and value judgements of government must be made by the political branches elected by, and accountable to, the people”https://t.co/3LMYeeDrfJ pic.twitter.com/eB5vYKVVNN

Judge Barrett: “I believe deeply in the rule of law and the place of the Supreme Court in our nation”https://t.co/ZnU5BSOhUe pic.twitter.com/LWWuMfj1sS

The true heiress of the Scalia seat, not Gorsuch.

Having “[insert name or characteristics] seats is a problem.

I didn’t get to watch the hearings and I don’t know if this was addressed there or elsewhere, but I can’t help but wonder if she agrees that the court (or any court) can overrule Congress. It would be interesting to have a judge on the court who didn’t believe that she has the right to declare laws unconstitutional.

Isn’t that their job: to make sure laws and their application to court cases are constitutional?

I’m not a lawyer, but this has been the subject of a lot of discussion over the years. There seem to be two schools of thought on that. Article III contains no such authority, except under a very broad reading of “judicial power”. It appears that the “power” to adjudicate constitutionality was part of John Marshall’s legacy.

The Constitution itself, and its authors, settled this a long time ago. I don’t understand how or why it remains a point of contention. Chief Justice Marshall did not invent the concept, as is often claimed.

The Constitution, at Article VI defines itself as the supreme law of the land.

In the same article, the Constitution says that all judges are bound by it. The authors of the Constitution knew exactly what that language would authorize and anticipated that the courts would settle controversies over government acts and legislation. Such authority was mentioned in both the Federalist Papers and in debate at the federal convention (as recorded in Madison’s Notes of the Debate in the Federal Convention). At the convention it was remarked upon by three different convention attendees, and no opposition was raised to their presumption that judicial review was within the scope of the courts’ authority.

#44
Madison noted that the “success” of acts of Congress would “depend on the executive and the judiciary departments, which are to expound and give effect to the legislative acts.”

Notes of the Debates in the Federal Convention of 1787

July 21
Mr. L. Martin:
“And as to the Constitutionality of laws, that point will come before the Judges in their proper official character. In this character, they will have a negative on the laws.”
(Can’t get plainer than that.)

Mr. Rutledge:
“The Judges ought never to give their opinion on a law till it comes before them.”

July 23
Mr. Madison:
“A law violating a constitution established by the people themselves, would be considered by the Judges as null & void.” (Here Madison himself, whose administration ended up on the short end of the stick in Marbury v Madison acknowledges the authority of judges to strike unconstitutional legislation.)

So much for separation of powers.

See my response above as to the propriety of judicial review.

This is one of the “checks and balances” you were taught about in grade school (or at least you should have been!). Every branch of government has a check on every other branch, in one way or another. Congress can be overruled by the executive (veto). Congress can override a veto. The president, with the consent of the Senate, appoints judges and justices (and in so doing infusing a degree of their own ideology, that changes over time, so the ideology of the court likewise changes over time). A court can strike down a statute passed by Congress and signed by a president. Congress can override SCOTUS by the process of amendment (as was done with the 16th Amendment, the purpose of which was to nullify the opinion of SCOTUS in Pollack vs. Farmers Loan and Trust). There had even been a check on the House in the form of the Senate, where the authority of the States as nominally-sovereign entities could protect their prerogatives from the rule of the mob. (Since disabled by the 17th Amendment, a death blow to the Republic. Want to know why we have an overbearing central government, instead of a federal government? Look no further than the 17th Amendment and the direct election of Senators. We now have two chambers of Congress representing the same constituents. They were never meant to work together, they were meant to work at odds, even when the same party controls both chambers.)

The courts’ ability to nullify unconstitutional law is just one of a series of nugatory powers that are meant to obstruct the creation of unconstitutional, unnecessary, and arbitrary laws. It is not a violation of the doctrine of “separation of powers,” it was made to work like this to prevent any of the “powers” from running out of control.

It’s not at all clear that Article VI means anything of the kind. Stating the judges are bound by the Constitution is not the same as saying that they’re the final authority on whether are constitutional. Neither does the quoted Federalist #44. The opinions offered during the discussions support your position, but there isn’t any indication that they were in any way the opinion of the majority, given that similar language didn’t find itself into the finished product. It’s not as cut and dried as you would have it.

Note also that the procedures for vetoes and overrides are written into the document. Judicial override isn’t.

Straight to a vote looking pretty good right now. Why do Republicans let the democrats play their games?

If one were to use 1940s singers as metaphors:

He hung on 15 years too long but was amazing before then.

Or they may be betting that the theatrics won’t play well and it will cost the Dems at the polls. They (Dems) have a very good track record of over-playing their hands.

Because they’re following the same procedures that have been set up for SC nominees since 1939 or so, when the first nominee appeared in front of the hearing committee. It’s fine with me, since ACB appears to be a fine nominee and is doing quite well.

Was just watching replay on C-Span but the whining of Finestine was to much.

The Dems make two contradictory arguments. 1. A believing Catholic can not be trusted to ignore her personal feeling instead of relying on the rule of law. 2. Judges must rule based on emotional reactions e.g. some Vermonter might loose his health plan, instead of the rule of law.
In truth, the left does not believe in the rule of law.

I don’t trust her. She’s pandering to women. What you want is good character like Justice Thomas’s, stick to the job and don’t be corrupt.

E.g. the inclination to adopt orphans from s**thole countires is a warning sign, not a positive point. She could slip into rule by feelings any time, if she sees it as a plus for judicial confirmation.

It’s good for her soul but not good for a judge. Quite the opposite. Run for President of Oberlin if you want rule by feelings.

I said it before (got 11 down votes), but IMO, she is a snake in the grass and Trump will live to rue the day that he nominated her.

And neither of you proffer any information backing up what you say.

Your “opinion” – based on what?

I wonder why Barrett’s religion has the Left in fits while Ilhan Omar’s doesn’t?