Graham Kicks Off Barrett Hearing With Takedown of Obamacare

Graham Kicks Off Barrett Hearing With Takedown of Obamacare 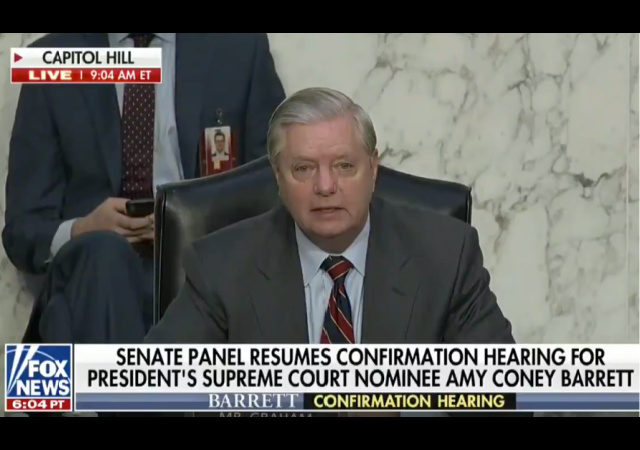 I guess Senate Judiciary Committee Chairman Lindsey Graham and the Republicans felt they had to address Obamacare since every Democrat claimed on Monday that Judge Amy Coney Barrett would dismiss it.

Graham began the hearing with a great takedown of the socialized medicine bill.

Graham said that Obamacare has been a complete disaster for South Carolina. His constituents do not want it. They want something better.

Graham explained they want South Carolina Care because, under the Affordable Care Act, three states have received 35% of the money from the bill: California, New York, and Massachusetts. This happened even though they are only 22% of America’s population.

“That’s how they designed the law. The more you spend, the more he get,” he explained.

“Obamacare is just a holding place for a single-payer system,” Graham insisted.

As I commented elsewhere, I expect that a Biden Administration will follow through on Obama’s groundwork by attempting to institute a policy of denying advanced medical care to seniors beyond a certain age, followed eventually by voluntary or involuntary euthanasia.

Haven’t we already seen that with democRAT governors in New York, New Jersey, Pennsylvania, Michigan and California killing off thousands of Seniors in nursing homes? One can only imagine what they’ll do with real power!!

Yet the lockdowns are to protect grandma in nursing homes

Do the progressives ever notice their flips

That the debate about Obamacare is even still ongoing is a testament to the ineffectiveness of the Republican party.

Please stop treating the demagoguery as if it’s some kind of reasonable point. Get to the floor vote already!

Far too many Republicans, I suspect Graham being one, would rather have the problem to fundraise and demagogue than a solution. Because they might be held accountable for their decisions.

He’s a lot more likely to bring a solution that works for SC than his Dem opponent is, if that flips the Senate.

i hope people won’t fall for this again. in 2016 trump said repeatedly that he would “repeal and replace obamacare”.
republicans held the house and senate for two years.
yet, nothing happened!!
what’s next pledging to build a wall and put hillary in jail?

Well, LawlessManBad is conforming to our US govt of laws on these. Repeal of a law has to pass the House n Senate. The admin has chipped away at The Make Care Unaffordable act where exec authority can.

Construction of The Wall, despite similar sabotage by The Screaming-Ds, is advancing at a velocity royally pissing off the resistance.

I do get how progressive apparatcheks, useful idiots n true believers wouldn’t get the notion of limited, enumerated powers, and processes for how we do things.

Obamacare passed (barely) because the Ds had 60 votes in the Senate. When the Rs held all three branches they had fewer than 60 Senate votes. Unless they were willing to nuke the legislative filibuster they could not repeal the ACA let alone replace it. All they could do is chip around the edges.

and because the House did egregious parliamentary maneuvers. I still remember the Sunday (or else Saturday) session of the House, with Jesse Jackson Jr. as parliamentarian, dismissing every Republican process objection without any discussion. At least two of those were valid objections that should have stopped the process.

Enacted by egregious actions in the House, heavy politicking in the Senate, and an incomprehensible SCOTUS decision. The whole thing should be uprooted.

Let’s not forget that the mid-term shellacking was delivered in response to O-care. (Having no impact on Obama admin or Screaming-D pursuit if this rejected policy … continuing to now.)

Representative govt, indeed, but representing what they want to do to us.