…yet it is spying on Japan for vaccine research results.

Europe is now experiencing a second wave and some nations are threatening lockdowns despite new World Health Organization recommendations.

Also, cases are surging throughout the United States:

With coronavirus outbreaks picking up speed in dozens of states, the U.S. is now climbing steadily toward a new peak in cases that may soon rival the summer surge — when the country hit more than 60,000 infections on average a day for weeks in a row.

On Friday, U.S. cases surged higher than they had since late July, hitting nearly 70,000 in one day. The seven-day daily average is now more than 56,000 cases a day. New cases have gone up by 30% from two weeks ago. 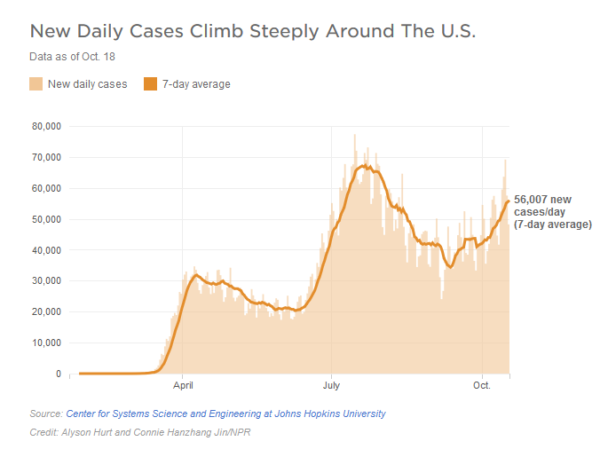 However, there are a few things the American media is neglecting to report. First, deaths and hospitalizations in this country are plummeting, thanks to early and effective treatment options.

But, our media is neglecting to look deeply into the China’s data…which would be fascinating, given that it was their “scientific” antics that led to the pandemic in the first place. 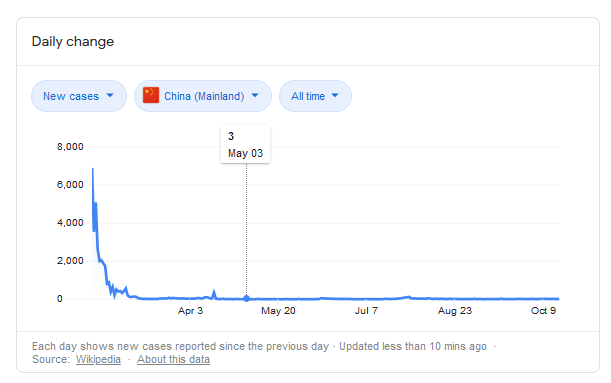 Clearly, China is offering a less than complete picture of its coronavirus cases. But, nearly as disturbing, China prospers as the rest of the world anguishes over lockdowns, social distancing, and mask mandates.

China’s economic recovery from the COVID-19 pandemic is gaining strength as consumers return to shopping malls and auto dealerships while the United States and Europe continue to endure painful economic contractions.

Growth in the world’s second-largest economy accelerated to 4.9% in the three months ending in September compared with the same period last year, up from the previous quarter’s 3.2%, official data showed Monday. Retail spending rebounded to above pre-coronavirus levels for the first time, and factory output rose, boosted by demand for exports of masks and other medical supplies.

China, where the pandemic began in December, is the only major economy expected to grow this year while activity in the United States, Europe and Japan shrinks.

The recovery is “broadening out and becoming less reliant” on government stimulus, Julian Evans-Pritchard of Capital Economics said in a report. He said growth was “still accelerating” as the economy entered the current quarter earlier this month.

However, if the Wuhan Coronavirus isn’t a problem in China, its agents wouldn’t be nearly as interested in spying on the Japanese and their vaccine research.

Some Japanese research institutions developing coronavirus vaccines have been hit by cyberattacks, apparently from China, in what are believed to be the first cases of their kind in the country, a U.S. information security firm said Monday.

Amid an intensifying race to develop vaccines against COVID-19, those bodies have been targeted by attacks since April but no reports of information leaks have been made, according to CrowdStrike.

The government’s National Center of Incident Readiness and Strategy for Cybersecurity has urged drugmakers and research organizations to raise alert levels against such attempts to steal confidential information.

The U.S. firm did not disclose the names of the targeted institutions, but said it suspects the attacks have been made by a Chinese hacker group, based on the techniques employed.

I will simply conclude that I am willing to take a vaccine…as long as it is not made in China.

I thought we knew better than to believe anything China said long ago.

notamemberofanyorganizedpolicital in reply to UnCivilServant. | October 20, 2020 at 9:12 pm

Notice how they interfering in our election with their BOUGHT AND PAID FOR Joe Biden.

Must see interview for all Americans.

More of their corruption documented.

The media is calling the video an anti-mask message.

Sort of, but their official explanation is: It’s really about the Ruling Class’ rules for thee, not for me stance, with masks being just one part of their aristocratic privileges:

Has anyone figured out that the Chinese Communist Party considered the pandemic as a form of population control as well as a means to harm Trump?

The second and first wave aren’t anything more than mass murder on a global scale unleashed by the CCP from their secret biological warfare labs.

Well, their infection rate is near zero… that means they have had a vaccine all along and this is bio-warfare, right?

It Was Never about a common flu.

DSHornet in reply to notamemberofanyorganizedpolicital. | October 21, 2020 at 10:00 am

It may be an urban legend, but that foul word that adolescents (of any age) throw around so carelessly had its origin in England centuries ago:

Fornication
Under
Consent of the
King
.

Forget a vaccine. You don’t need it.