Some people lost their private insurance three times under Obamacare. 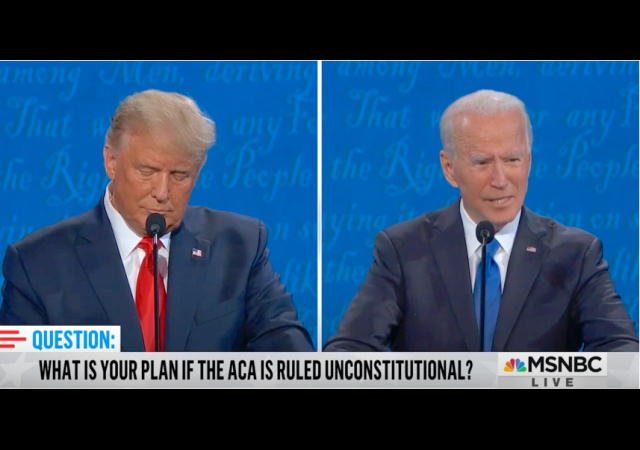 You do not support private insurance!

Plus, those of us who were able to keep our insurance had to accept new plans with higher deductibles.

Since I have so many health problems I went ahead and chose a high deductible because my meds get me to my deductible by the end of February. One infusion for my rheumatoid arthritis puts me above the 50% mark. (Yes, a small dose is that expensive)

Politifact’s 2013 Lie of the Year belonged to Obama: “If you like your health care plan, you can keep it.”

I lost my private insurance THREE TIMES when Obamacare came along, Mr. Biden.

Biden: “Not one person lost their private health insurance because of Obamacare.”

That’s right… my healthcare plan just magically went poof for no reason when I needed it most. ❤️

I had private health insurance thru 2016 & my cost was $0/yr w/an employer subsidy. Obamacare changed all of that. My plan was cancelled & my costs went from $0 to about $13,000/year. Most people forget this is one of the primary reasons Obama lost the House of Reps in 2010.

I'm a family that lost our private insurance after #Obamacare We're out here despite what @JoeBiden is saying.
Our 20+ year family practice also went out of business during that time b/c of Obamacare.#Debates2020

The Lie of the Year, redux.

Also, the security of your personal information when it was started was equated with rolling around naked in a hospital dumpster.

People get on Trump’s case for not countering one lie or another, but every time Biden opens his mouth it’s like a birdshot blast of lies. It’s hard to counter them all or discern in real time which is the most important one to address.

I know have a $6,000 deductible increasing to $6,875 in 2021. If I take a lower deductible plan I would pay the entire deductible spread out over time.

Thanks Joe. Thanks Barack. And thank you John Roberts for your judicial sophistry.

You mean the lower deductible would result in an increase in premium comparable to your deductible?

When I was checking out plans, I compared total premium + deductible for the different plans. The total cost difference was minimal, so I opted for the high deductible plan since I could add money to my health savings plan. Essentially, I built up money to cover the deductible in case I needed it.

Of course, this strategy works if you are a low user of health care.

The downtick was me. Sorry…

Right now there’s no incentive for the healthcare industry to keep costs down or trim administrative bloat, or haggle with pharma over the prices of drugs. The wealthy can still pay, and the State picks up the tab for those who can’t from our taxes.

Private insurance becomes cheaper as prices drop and may be less resistant to covering pre-existing conditions.

Couldn’t be worse than what we put up with now.

To the Way Back Machine.

Back in the pre-1960s, most people did not have medical insurance. Employee benefit insurance plans began to gain traction, as it was a low cost benefit which could pay off big, for employees, in the case of catastrophic health issues. Then, politicians got involved. To woo and hold voters, federal politicos passed Medicare. This was the beginning of the increasing spiral of medical expenses. Whenever you have a guaranteed third party payer system, costs rises, as the vendor can charge more and be guaranteed increased payment. Also, in many cases, the vendor only gets a percentage of the charges presented. In these cases, the higher the charge the higher the payment. So, the cost of health care increased. The same has happened with college tuition when the federally based student loan program went into effect.

Then, the expected happened. First, as costs increased, more and more people NEEDED medical insurance in order to access medical care. Then, as costs continued to increase as the third party payor system continued to expand, insurance companies, for profit operations, had to take steps to protect their bottom line. This was accomplished in two ways; by increasing premiums and deductibles. Now the consumer was faced with the same choices that he had 20 years earlier, the inability to afford health care or health care insurance coverage. What to do?

The political class saw the answer. Obamacare. The whole point of ACA was to fold all health coverage directly under government control, especially federal control. Now, there are, again, two ways to control costs. One is to increase the cost to the consumer/payer. The other is to control costs. Now, if the payer is the only source of reimbursement for an industry, that payer controls the industry. However, in order for this all to work, the government had to remove all competition. And, that is what the government set out to do.

Now that we are up to speed, is it any wonder that people lost private health care insurance or that their costs rose to the point where they could not afford the level of coverage they enjoyed before the ACA was passed. Fortunately, the voter revolt of 2010 short circuited the continued expansion of the ACA into cost controls. Otherwise, the private insurance industry would have been destroyed and we would have seen both actual reductions in health care services as well as enforced reduction through cost controls and denial of coverage.

This is the future under expanded government control of health care insurance.

Good summary. A few additional points – the wage controls after WWII was the incentive to offer health care insurance as a benefit since that was not part of wage.

When I worked in health care, hospitals were reimbursed by Medicare based on the lower of costs or charges. That concept created the need for reimbursement specialists. The services that were used by Medicare patients were increased in price so that the hospital recovered more of the cost. Then the state Medicaid program and large employers wanted the same type of discounts. The “list price” increased so that after all the discounts, the hospitals covered costs.

The Certificate of Need laws also added to costs, since hospitals had to bear a certain amount of charity care in order to get additional beds or a new machine.

Good info from both Mac45 and Liz.

Why are we missing accurate data for significant issues like COVID-19 and health insurance?

How is it possible to reform the health care and health insurance systems without accurate data?

One other reason why individual plans had high premiums and deductibles is this paragraph from this article which you won’t like:
https://www.usnews.com/opinion/policy-dose/articles/2017-05-30/republicans-raised-your-health-care-premiums-not-obamacare

“Florida Republican Sen. Marco Rubio, for example, was among the first to land a blow. In 2014, he proudly led a successful effort to cut funding for the “risk corridors” program. Rubio called the payments made from these funds a “bailout” for insurers, but in fact the program was an integral backstop to help control premiums as insurance companies in the marketplaces adjusted to the new population they were covering. The consequence of that ploy to score political points was that some insurers left the marketplace, and many Americans’ premiums went up.”

This was the Republican’s strategy for destroying Obamacare. Unfortunately, it also destroyed people’s access to health insurance.

It is my hope and prayer that President Trump will be able to cut through the insane mess of health care and health insurance when he is reelected in November.

Under BidenCare – if you get a heart transplant,
The Big Guy gets a piece.

Uh, mister Biden, would you like to comment on my health insurance premiums doubling and my deductible tripling under Obama care?

My wife lost her private health insurance twice after Obamacare, and after the second time, she had to “go naked” (no insurance at all) for almost two years before she qualified for Medicare. Best policy available under Barry’s Compassionate Plan was $3K/month and $4K deductible, then 50% copay; so she would have had to spend $40,000/year before getting her first four bits back for healthcare. Biden can go suck a utility pole. Better lube it well, too.

Its all just a constant gaslighting of the American public with them.

Ha, Obama couldn’t cost me my private insurance—that had already evaporated under Romneycare. A big fat thanks for nuthin’, to both of them.

Pre-Obamacare: $350.00/biannually. (that means every six months for any BLM/Antifa/Dem types that may be reading)

So not just an AntifaBLMDemocrat point of confusion. 🙂

Friend of mine lost her plan under Obamacare, couldn’t get the same level of coverage unless she went platinum level or somesuch i.e. prohibitively expensive, and is now living in a one insurer town where she simply can’t afford insurance.

More transparency would be a good start.

People in their early 60s,, they are hit hard.. really hard.

Republicans had the chance to cut out the cancer of Obamacare when they controlled Congress – and the Congressional GOPe whiffed completely.

You can thank Paul Ryan for that

This issue is affordable and available health care. Insurance is one approach to diffuse consumer expense.

The Bill To Permanently Fix Health Care For All

The problem is likely price, not cost. Trump is headed in the right direction to mitigate its progress.

I switched to a direct patient care group and paid $70 a month for access to the doctor. Lab and x-rays were paid at cost and the docs kept a small pharmacy of common scripts, also passed along at cost. I see/email my doctor more often now than when I had Blue Cross. MY insurance is now really just a major medical plan.

The lab I go now has a bunch of tests you can order and pay for yourself – no doctor or insurance company needed. The list was first mainly drug and STD tests, but now, I could order a bunch of general lab tests. The cost is less than insurance costs, so I could track my vitamin D levels or cholesterol levels.

Lost my insurance and then couldn’t afford to pay for even the lowest level plan in their O’crappycare. Sod off, Biden.

I remember a Pelosi news conference where she tried to sell Obamacare as a way for people to leave their jobs since they would not be tied to the health plan. They could be “creative and follow their dreams” or something like that…

So, a bunch of people have left the company job for Uber, Lyft, being an independent contractor, and so on. Many of them like the freedom of not having a boss.

So, what’s the new thing – cancelling out the Ind Contractor category by requiring companies to hire them. One of the excuse is that the individual would get benefits, like health care. See the impact in California and the plan to make it a national issue.