“You have been nominated by a president who shows contempt for the Constitution…You cannot feel good about a president cheapening this historic moment”.” 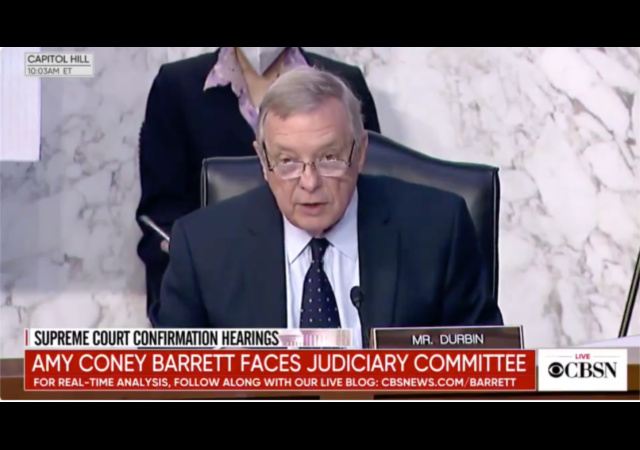 I swear, these hearings serve no purpose other than for politicians to hear their own voice and put on a show.

They always have to use kids to push their agenda. You don’t hate kids, do you?!

Again, the Democrats have changed the definition of “court-packing” because their nominee refuses to say if he will pack the court.

"You have been nominated by a president who shows contempt for the Constitution…You cannot feel good about a president cheapening this historic moment" https://t.co/uScvfX9o80 pic.twitter.com/EpCFawunBt

Durbin actually told Barrett she “cannot feel good” because President Donald Trump only nominated her “to the bench to do his political chores.”

Plus, he described the hearing as “a shameless, self-serving, venal reversal.” From USA Today:

Durbin said the reason could be summed up in two dates: Election Day on Nov. 3, and the high court’s Nov. 10 date with the Affordable Care Act. It is then that the justices will consider killing the law.

“In the midst of the pandemic, the Republicans want to strike down a law that 23 million Americans rely on,” Durbin said.

Like other Democrats on the panel, Durbin displayed a large photo of a family from his state that has depended on the health care law for crucial insurance coverage. In his case, it was a young boy who went on to play baseball after receiving the care he needed.

Durbin quoted the boy’s mother: “Kenny is a real person whose life depends on the Affordable Care Act.”

CBS left out the term “without evidence”

Yessir, tell her how she feels, how she thinks, and how she will grant Justice from the bench. Senator Durbin, you are a pos in my book.

But he’s a Democrat and she’s a Republican, so it isn’t mansplaining.

Durbin quoted the boy’s mother: “Kenny is a real person whose life depends on the Affordable Care Act.”

The diagnosis is progressive prices and low availability. The prescription may involve insurance, and shared/shifted responsibility, but that only treats the symptoms. The cure is to ensure that medical care is affordable and available to everyone, not just a subsidized minority.

Oh, and the bill for Obamacares came due, when prices persisted, debt was progressive, and promissory notes were called. Trump is on the right track when he assessed that the cause was in, general, progressive prices, not the exceptional progressive costs, and that Obamacares produced, at best, a temporary placebo effect.

The Republicans need to make thousands of ads about all the people who lost their coverage as the foreseeable and therefore intended casualties of the carnage Obamacare wreaked on the health insurance sector.

They’re real people, too, just like Kenny. To pick one individual, one data point, who benefitted while thousands if not millions were devastated is the height of irrationality. But these irrational tear-jerkers work so the GOP needs to beat the leftists at their own game.

If single cherry-picked data points can be used as proof of something, then there is no wildlife in Wyoming. Only cattle. How do I know? I once drove through the entire state and I didn’t see a single deer, elk, mountain lion, black bear or griz. I didn’t even see any road killed rabbit. But I saw some cattle.

Therefore according to the Durbin/Leftist Rules of Logic there is no wildlife in Wyoming. Only cattle.

Stalin understood it. “The death of one is a tragedy. The death of millions, a statistic.”

It’s weaponizing the limitations of human empathy. We just can’t empathize with millions of people, no matter their misfortune, the same way we can with a handful of names and faces.

Seems to me that this right here is a fundamental to the differences in approaches and what has turned this country to crap more than anything else is the focus on the rights needs and wants of single individuals, small factions, outlier types and crusading for the super minority special groups as opposed to focusing on satisfying the huge majority.

Which is how it used to be. Majority charts the course, not the fifty gender groups that are somehow more important than regular or normal majority (and discounts the diversity inside the norm, as if we are all alike).

“Kenny is a real person whose life depends on the Affordable Care Act.”

And all these children are real persons whose lives (and the lives of family members) depended on immediate access to loaded, unsecured firearms in their home.

Kenny is a real person whose life depends on the Affordable Care Act.

Some people have really strange ideas about medicine.

In other news, water is wet!

Not for nothing is he called Dick!

You killed Kenny! You bastard!!

Beat me to it. Cheers!

Isn’t Durbin the Senator from Illinois who had lots of emails from the leftist-Democrat, the baseball practice shooter? Emails he has never shared. That Durbin?

I am amazed over and over how low my opinion of Democrats keeps falling. Then they do more stupid stuff and that opinion falls further.

And why does Durbin take such a personal interest since by statute he is not required to purchase an Obamacare plan?

What would be striking, and I mean striking, would be a display of the remains of the millions of unborn children who were aborted by policies enacted by Durbin and other Democrats.

This modern day pharaoh has hardened his heart. I read in his page that he claims to be a Catholic but that does strain credulity.

“Senator Durbin is Roman Catholic. In 2004, the Roman Catholic Diocese of Springfield in Illinois barred him from receiving communion because he voted against the Partial-Birth Abortion Ban Act. The current bishop of the Diocese said Durbin stays away from his Springfield parish because “he doesn’t want to make a scene.” Durbin responded to the communion ban in 2004 saying that he is accountable to his constituents, even if it means defying Church teachings. In 2018, the decision to deny Durbin communion in the Springfield Diocese was affirmed by Bishop Thomas John Paprocki after Durbin’s vote against the Pain-Capable Unborn Child Protection Act. Durbin continues to practice his faith, attending mass and receiving communion at Old Saint Patrick’s church in Chicago.

Durbin falls under the heading of “lapsed Cathic”, of which there are many in the political ranks these days.

No worries… he really isn’t Catholic… Roman or otherwise. Bearing false witness and all…

To be fair to Durbin he’s in good company starting with the Pope. Francis says arms manufacturers and investors in the arms industry are hypocrites if they call themselves Christians. Given that the Pope is in charge of two armed forces, one military the other civil, the Swiss Guard and the Vatican police force (Guardia Svizzera Pontificia and the Corpo della Gendarmeria dello Stato della Città del Vaticano in Italian) then it’s really the Pope who is the hypocrite.

The last I checked these two outfits are equipped with SIG/Sig Sauer and Glock handguns, Swiss-manufactured assault rifles (currently SIG SG550 plus variants; whatever has been standard issue for the Swiss army has always been standard issue for the Swiss Guard), H&K and Beretta submachine guns, and FABARM tactical shotguns. The Vatican Armory is a virtual museum; they never get rid of anything so they have what some may consider antique but well maintained and fully functional WWII era and postwar era submachine guns, military rifles dating back to the 19th Century, and the pole arms the Swiss Guard carries when in ceremonial medieval uniforms are NOT ceremonial weapons. In fact, the Swiss Guard is trained to use them as originally intended. Just in case they have to react instantly to a threat and don’t have time to reach under the armored breastplate for the submachine gun they have hidden under there. It reminds me in a way of Japan. When Japanese police set up as sentries what you notice most are the five foot “batons” they carry, one end resting on the ground. You do not want to mess with a Japanese cop because they are expert practitioners of Aikido (including percussion or striking techniques that aren’t normally taught) and Kendo (sword fighting) and will beat you until you are one with the pavement with that baton.

You also don’t want to mess with a Swiss Guardsman equipped with a 9 foot halberd. Unless you have a firearm, and you aren’t standing within range of the blades.

The city state is walled for its own protection. One of the Vatican police force’s main duties is to enforce border controls. Yet this Pope runs around shooting his mouth off, denouncing others as hypocrites who shouldn’t dare call themselves Christians for doing exactly what he’s doing.

I consider myself a lapsed Catholic; now I’m a non-denominational Christian. I’m also still guided by things the Catholic Church no longer takes seriously. Such as the Catholic Catechism. Certainly this Marxist Jesuit doesn’t believe a word of it. Neither to the pedophile priests and the bishops who protect them. So, I figure Durbin et al are the perfect modern pols for the modern Catholic Church.

Sure a few throwbacks deny him communion. But they, like me, are the misfits.

Oodles of UP votes.

Vote Screaming-D if you want more of this off-point demagogery n claptrap to run amok.

BTW, there’s a judge there to evaluate for confirmation. Might want to pay some attention to her.

Oh, right. The judge only matters if you havn’t already decieded how you’re gonna vote.

Any further questions as to what the nation will look like if the Dems take FINAL control? Lenin, Stalin, Mao, Ho (and yes.. that mustached Austrian guy) fully understood where this would be going.

It’s sad that the colors got reversed…but it’s still Mao’s Red Book although with a blue cover. The Cancel Cultural Revolution.

Took me a second to realize you were referring to a Vietnamese Communist and not to Commula Harris.

The pictures behind the Dhimmi-crat sentators represent political props, but, look deeper, and, you’ll see an accurate representation of the Dhimmi-crats’ warped view the courts and the judicial role — as vehicles for deciding cases based upon appeals to sentiment and emotion, as opposed to such quaint notions as facts and laws.

Durbin is a embarrassment to IL and has been ever since he called our military nazis and had to apologize.

They all did. Collectively, Democrat presentations looked and sounded like a junior high school class turning in an assignment.

Democrats do not want a “rushed” SCOTUS confirmation as they have raised more than $100 million so far in the fear mongering off RGB’s passing and do not want it to end.

I’m telling you, if I could run for a high office like House or Senate, one of my campaign mottos would be the children, freedom all the way.

Maybe Durbin could talk to the unemployed like me who were fined by Obama for not having health insurance but unemployed. And the jobs were not there either thanks to Obummer’s economic policies.

This is true and speaks to the left’s common tactic of accusing the opposition of their own offenses.

His nickname “Dirty Dick” says its all.

Ya gotta love when the commie left feigns concern over the Constitution. Yes, the same Constitution they’ve been trying to circumvent and dismantle for years.

Dear Mr. Durbin, even the MAFIA has rules about not attacking the NON-COMBATANT families of their enemies. Looks like ‘Street Gangsters’ have more scruples than you! (Not surprising!)