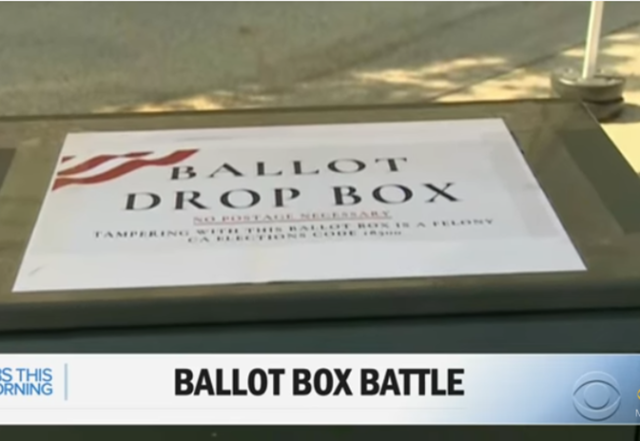 We have covered California’s “ballot harvesting” law since 2018. The law allows third parties to collect and deliver ballots. It is suspected that implementation of those rules contributed to the loss of seven Republic congressional seats during that election, allowing the Democrats to regain the House of Representatives.

California Republican Party officials on Wednesday doubled down on their efforts to use private ballot boxes to collect votes, arguing that the practice was within the bounds of state election law and vowing that they will continue to use the unofficial containers.

In a telephone conference Wednesday afternoon, GOP officials said that they were participating in ballot collection in order to be competitive, using the “same rules and laws” that Democrats use.

“It’s pretty clear that Democrats only care about ballot harvesting when someone else is doing it,” California Republican Party Chairwoman Jessica Millan Patterson said. “The Democrats are the ones that voted for this legislation.”

Republicans say they are operating under a 2016 state law that allows an unlimited number of completed ballots to be collected by an individual or political parties and campaigns.

The state GOP placed the private ballot boxes in Republican-controlled areas. The state’s election officials were up-in-arms over this move.

Secretary of State Alex Padilla and Attorney General Xavier Becerra, both Democrats, say these boxes are illegal. They say the law only allows drop boxes established by local elections officials. And, they say the law only lets voters give their ballots to a person.

Plus, they worry voters will confuse the boxes with the official ballot drop boxes operated by county election officials.

Republicans say they are following the law and making sure the boxes are secure and monitored. They have admitted it was wrong to label some boxes as “official” and said they stopped doing that. They say the ballot harvesters are not signing the ballots because the law does not disqualify the ballots for lacking harvesters’ signatures.

However, the state has relented after the Republican Party removed the word “official” from the boxes and made a few, minor changes to fully adhere to the 2016 law.

California officials lowered the temperature Friday in their legal standoff with the California Republican Party over its unauthorized ballot boxes, saying the party had committed to enough changes for now to satisfy their concerns.

…California Republican Party said it would continue to accept mail ballots at boxes but promised some safeguards: The boxes will be attended to whenever the public has access to them, and ballots will be secured and then delivered to elections officials within the required 72-hour frame, the party said. The party pledged to not represent those boxes as “official,” saying a volunteer had done so in error, while arguing that the process was legal due to a 2018 law that loosened collection requirements.

Republicans should be harvesting ballots at nursing homes like the dems do.

But the Dems own the graveyards.

Dems made them graveyards.

The only way to end this shady practice is for everyone to do it.

While it is good that the California GOP is fighting back (finally!) I still loathe the idea of mass voting by mail or so-called ballot harvesting. I can see this quickly deteriorating into a cheating contest, and I doubt the GOP can keep up in the voting fraud department.

Remember: if there is even the slightest slip up or error by the GOP the Communist authorities will land on them like a mountain crushing a sand castle. The US DOJ could provide some counterbalance, but how likely is that? Be prepared for this to get truly ugly if the Communists feel power slipping from their grasp.

I expect Trump to surprise in CA. He won’t win the state but it sure feels like Republicans are going to regain the 7 seats stolen in 2016 and probably a few more. Good-bye Nancy. Hello Kevin McCarthy who will accused of cheating.

Hopefully, the ballot harvesting will play a significant role which could result in bipartisan support for returning to the reliable paper ballot cast only by voters showing up at the polls on election day.

It’s going to be the shocker of the election.

I think he’s got enough disaffected white liberals in both states who aren’t crazy about the left and it’s growing violence AND enough growing black and Hispanic support to put him over the top in both states.

“GOP officials said that they were participating in ballot collection in order to be competitive, using the “same rules and laws” that Democrats use.”

No, what democrats do with ballot harvesting is steam them open, reseal/submit democrat voter ballets and sh1+ can GOP ballets. Or even outright replace GOP ballets with fake democrat ballets.

I hear there are seven states with such poorly designed online systems that you can cancel someone’s vote if you know their name and date of birth.

I don’t see this doing the Rs any good unless they resort to D-style voter fraud, which I neither expect nor recommend. If they’re very active perhaps they can harvest the votes which would otherwise by harvested by the Ds, but the communists usually have a pretty good ground game and will be tough to beat on-the-fly.

If cheating is the new rule, than that’s the rule for everybody. I hate to say, it MAY have to involve voter fraud.

Good. Finally playing by their rules! I’ve never understood why we don’t.

HA! I love this. The Dems are freaking out that the GOP is using the rules the Dems made to scam the election and there is nothing the Dems can do about it.

With that said all these laws need to be gotten rid of straight to the trash. Ballot harvesting is just ripe for fraud.

The CA Republicans have gotten feisty.

So, rather than cave and start negotiating agains themselves at the first pushback, the Californaia R’s held their ground.

And look what happened.