Author of “The Flight 93 Election” offers a strategic assessment the nation as it relates to the “red-blue” political and cultural battle. 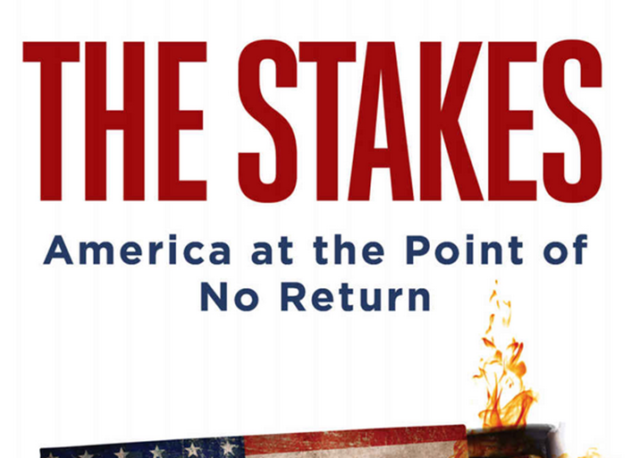 Two months before the 2016 presidential election, an anonymously published essay titled “The Flight 93 Election” urged Americans to “charge the cockpit” by casting their votes for Donald Trump.

The author of that seminal piece, Michael Anton, has followed up that pivotal essay with a gripping analysis about the tactics of the left and the consequences to the country if it prevails.

In other words, the stakes have never been higher.

“The Stakes” is both a brilliant yet disturbing analysis of what is at stake in November’s election. In a nutshell, the work is a strategic assessment of the status of the red-blue battle for the direction of the nation.

Anton uses both the past and the present to demonstrated how the country’s elite class have plans to enrich themselves and to control regular Americans. One particular chapter hit home as he reviewed the state of California and how it devolved into one-party rule. Absorbed in inane social justice and environmental policies that no longer takes care of the civil and infrastructure needs of the rest of the population, the ruling party has led California off the cliff.

The books if loaded with gems cut from Anton’s meticulous research, engaging analysis, and a bit of dark humor to make key points. Perhaps some of the hardest passages for me to read were those on the Republican (and supposedly conservative) intellectuals who were supposed to enact the policies they said they were promoting. I have been shocked by their response to the president, who is actually doing the work that set said needed to get done.

To the extent that the Republican Party is animated by ideas — a laughable assertion today, but one that was true within living memory — it will need an entirely new intellectual class. Establishment conservatism — its institutions and scholars, its think tanks and magazines, its handful of professors at elite universities—is a spent force. Many legacy conservatives are fine people with sound opinions, especially compared to what passes for conventional wisdom today, but they have shown themselves to be unequal to the task before conservatism today. Conservative intellectuals aren’t merely waging the last campaign —t hey’re forever fighting the 1980 campaign.

Anton also looked at “cancel culture” and the role of Big Tech.

If you think we have mass surveillance already, just wait. The government and the tech companies already work hand in glove, the latter helping the former in exchange for favorable tax, regulatory, and immigration treatment. When the last checks on this collusion in the executive branch are gone, expect their joint censorship and oppression of dissent to increase by orders of magnitude. The left has finally found a way around the First Amendment: consolidate all “speech” and public expression onto a handful of private-sector platforms run by oligarchs and staffed by Wokerati; let them do whatever they want and when anyone complains, reply that “these are private companies that can run their business however they want; you don’t have to use their platforms and if you don’t like it, start your own.” Through all this—and more — the left knows it can count on the idiot, friendly-fire-spraying libertarians to sing that tune the loudest. Free speech as we have known it — as our founders insisted was the natural bedrock of political rights, without which self-government is impossible—will not survive coming leftist rule.

The book is an incredibly engrossing read, especially for those who love history, politics, and our country. I give it 5 out of 5 stars, and I recommend it be read before this election and that it be kept in the library to read before every election from now on.

.
Thanks for the review, Ms. Eastman. Time to pull the trigger and buy it.

“these are private companies that can run their business however they want; you don’t have to use their platforms and if you don’t like it, start your own.”

How many times has that been bandied about here by our all-knowing resident lawyers? Why do we allow modern technology controlled by a handful of like-minded conspiratorial globalist billionaires to cancel our constitutional rights?

We know what the constitution says and what it means. We also know we aren’t free anymore and why that is. What do we do about it? You lawyers better find a way to make it legal language required to enable our constitution be effective because accepting THAT argument renders our constitution into a defacto suicide pact. Does original intent have any standing here?

notamemberofanyorganizedpolicital in reply to Pasadena Phil. | October 11, 2020 at 7:10 pm

Business Leaders Who Reject Woke Culture To Be ‘First People Lined Up Against The Wall And Shot In Revolution’: Ex-Twitter CEO

Is America already far gone? How will this country recover from the American Chernobyls of Portland, Seattle, Chicago, Minneapolis, etc.? One case in point: The idiots running for mayor of Portland? The Stalingrad city councils of these cities? These inner cities look like Stalingrad after the Germans and Russians were finished killing and bombing each other into the gates of hell. Ironically, it was fascists and communists terrorizing each other at the Battle of Stalingrad just like the two mayoral dolt candidates debating each other this past week. Stalin, Lenin, Nikita Khrushchev, the Bolsheviks, the Mensheviks, Uncle Marx, they all are laughing the lids off their coffins!

Michael Anton makes his thesis on many points, however, the case study of California is nothing compared to the plight of New York State. A state that was once the powerhouse of politics in Washington with 45 electoral votes. After the 2020 census, NY will likely drop to 26 or 27 votes. Where did the population go? Where have the established industries gone? Of course, begging the question here. Single party rule, ranked 49th in business climate, and taxes beyond any rational justification. If NY continued to grow after the early 1970s at just a 1% rate, one could project NY to have at least 60 seats in the House of Representatives today. 60 vs. 26/27: who ran the show in NY from the 1970s to 2020? Single party in the NY Assembly that’s who.

Who early in the 1970s would have thought that one day Florida would have more population than New York? The only industry left is New York of any consequence is the Financial District of lower Manhattan. If that industry begins to filter out of New York, the state will be in peril. People who live in NYC pay as much in City Income Taxes as they do State taxes. How much longer can this be sustained? Log trucks travel the roads of upstate full of undersized logs. Why? The landowners are deforesting their properties in order to pay the school and property taxes. We’re de-foresting the land to pay the taxes. Where are the environmentalists on this issue?

Its not just the Democratic party run cities; its also the suburbs and rural areas that suffer under their postmodern/progressive/utilitarian/utopian tyranny.

In this 500 page book, “crime” is indexed 55 times. This is a significant issue largely ignored by one side in this presidential election cycle. Anton doesn’t shy away from its significance. “Crumbling infrastructure”, “incompetent”, “filthy”, “Dangerous”, are just a few of the key word topics in Anton’s book. “Pathologically Altruistic” and “American civics education” are interesting topic reads that can hardly be refuted. All one needs do is look around and experience American life with some objectivity. We are “Torching the Parchment,” which of course references the Declaration/Constitution founding of our Nation.