Biden: People Who Think They’re Better Off Under Trump Shouldn’t Vote for Me

Biden: People Who Think They’re Better Off Under Trump Shouldn’t Vote for Me

“They think—54 percent of the American people believe they’re better off economically today than they were under our administration? Well, their memory is not very good, quite frankly.” 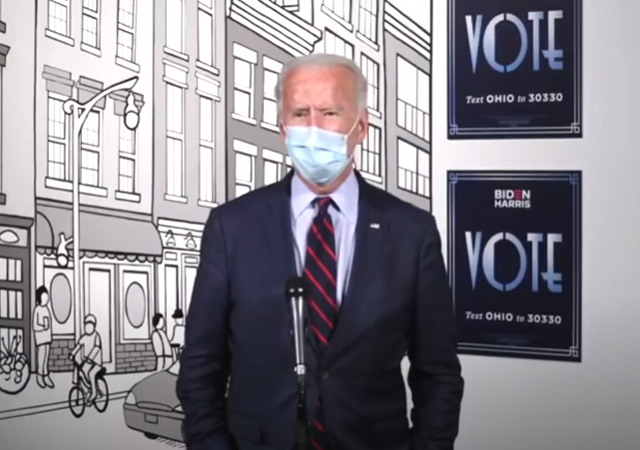 A recent poll from Gallup found that 56 percent of registered voters believe they are better off after four years under President Trump than they were four years ago under the Obama/Biden administration.

Joe Biden was asked by a reporter why these voters should support him. Biden said they probably shouldn’t.

Here’s the detail from the Gallup Poll:

Most Say They Are Better Off Now Than Four Years Ago

During his presidential campaign in 1980, Ronald Reagan asked Americans, “Are you better off today than you were four years ago?” Since then, this question has served as a key standard that sitting presidents running for reelection have been held to.

Gallup’s most recent survey found a clear majority of registered voters (56%) saying they are better off now than they were four years ago, while 32% said they are worse off.

This is an outstanding election metric for Trump. At least Biden was honest in his response.

Leah Barkoukis of Townhall has details:

Democratic presidential nominee Joe Biden responded to the Gallup poll showing a majority of Americans saying they’re better off now than they were four years ago the only way Joe Biden knows how to: by attacking the respondents.

“Why should people who feel that they’re better off today under a Trump administration vote for you?” a reporter with Cincinnati’s WKRC Local 12 asked the former vice president.

“Well if they think that, they probably shouldn’t,” Biden initially responded…

“They think—54 percent of the American people believe they’re better off economically today than they were under our administration? Well, their memory is not very good, quite frankly,” Biden told reporter Kyle Inskeep, getting the stat wrong.

It’s amazing how candid Joe Biden can be when he is allowed to speak freely.

Thanks Joe! I’ll take that advice for sure! Smartest thing he’s said yet.

A “basket of deplorables” moment?

His advice came a bit late, I already voted for Trump.

On one hand, I feel sorry for Biden, he’s losing his marbles,and being used by some pretty nasty people. I am well aware that I may well end up like him at some point in the future, but that day has not come yet. I fully recognize that Trump stands head and shoulders above Biden 🙂

How could this selection of a ticket be anything other than the D.N.C. throwing in and taking a pass on the election?
They may be looking for ’24, things are messy now.
And in ’24, they will be free to second-guess every single event.

The polls, I just don’t really believe..
Could it be close? Sure.

Their plan is to use Biden as a puppet and then remove him to install their other puppet, Harris. Make no mistake: in neither case will the puppet be calling the shots; they’ll just do as they’re told. Harris in particular doesn’t have a single brain cell in that cranium of hers that is capable of original thought.

Kamala Harris is another Affirmative dud whose greatest skill was horizontal negotiations.

Biden does have moments of coherence to openly state what we are all thinking.

That’s almost as honest as the Donald himself. As victim of the Obamunism, I’ll be taking your statement to heart. Thanks Joe for doing your part to lower the economic opportunities and tax me more in addition to your party hating me because I’m white.

“You people are too stupid to know what’s good for you” is a hell of a message.

The Democrat party platform in one sentence.

That’s a bold strategy cotton, let’s see if it pays off for him.

It shows Biden doesn’t have a good memory if HE thinks that even with this plandemic the economic success is not better under President Trump.

Obama believed the US economy would never come back, yet tried to claim credit for President Trump’s success in the economy to his failed policies.

Maybe Dementia Joe believes the lies he and Obama told. Or maybe he just remembers all the millions his family made thanks to using Biden’s name and being tied to Obama, which probably dried up a good deal.

Trump is the only reason this country had the resilience to withstand the damage done by the shutdowns. (Note the plural: “shutdowns.” It was not “a shutdown,” and not a decision made by Trump.) If we had gone into the shutdowns with a crippled, stifled, Obama-era economy, that would have been a true disaster.

We don’t plan to.

It’s a deal, Sleepy Joe. I’m definitely better off financially under Trump even with covid than under Biden-Obama. You can count of me not voting for you or any other Democrat.

He could have just said that he knew a reason but that we didn’t have a right to know. “You’ll find out after the election.”

I saw a car on my way to the grocery store. “KAMALA HARRIS For the People!”

At least it was honest…

I brought that to Mrs. McG’s attention. Her response: “Those terms are acceptable.”

So, Slo Jo, explain how having to hire attorneys to advise on how new Federal regulations affected me, having Health Insurance premiums double, and having my deductible tripled help me out? Please explain how forcing the military to accept mentally ill transgenders helped anyone.

I love the “conspicuous virtue to a stupid degree” mask wearing and distancing in that clip.

Not a problem, knucklehead.

this is like 2016 when clinton told sanders supporters to not vote for her. but please vote for other democrats on the down tickets.
https://www.counterpunch.org/2016/05/04/hillary-to-bernie-supporters-dont-vote-for-me/

can’t imagine why they are repeating all the mistakes from the last election?
could it be because they want to lose?

Once again Joe steals somebody else’s idea and presents it as his own. Don’t worry, Joe I didn’t. In fact I wouldn’t have even if I felt I was economically better off then. There are too many other disasters waiting to happen if Biden and Harris are elected.

My ballot is on its way back to the states now or so I have been promised.

Heya Slow Hiden, the question was about 56% of the people, not 54% … I can understand exactly why Brit Hume says this old man is senile, it’s because he is!! VOTE TRUMP, VOTE VOTE VOTE VOTE TRUMP!!

I’m not voting for you because your party hates America and its very founding.