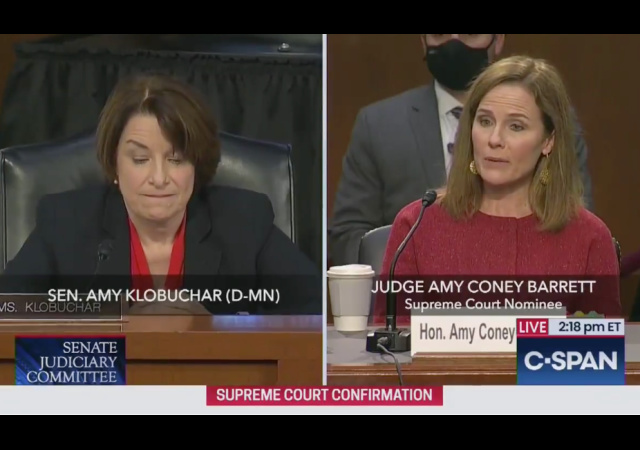 Barret explained her position, but also reminded Klobuchar that even progressive scholars don’t consider the abortion law as “super-precedent.”

Klobuchar followed by asking if Barrett if she thought Roe v. Wade was a super precedent.

“Well people use super precedent differently. The way that it’s used in the scholarship and the way that I was using it in the article the that you’re reading from was to define cases that are so well settled that no political actors and no people seriously push for their overruling and I’m answering a lot of questions about Roe, which I think indicates that Roe doesn’t fall in that category,” Barrett said
“And scholars across the spectrum say, that doesn’t mean that Roe should be overruled, but descriptively it does mean that it’s not a case that everyone has accepted and doesn’t call for its overruling,” she added.
Klobuchar then pressed Barrett about why she was willing to call Brown v. Board of Education a super precedent, even though the Supreme Court has not classified it as such, but will not say the same about Roe v. Wade, despite the Supreme Court’s ruling opinion describing it as a super precedent in the Planned Parenthood v. Casey case.

Barrett responded, “Well, senator I can just give you the same answer that I just did.”

Pressed by Sen. Amy Klobuchar, Supreme Court nominee Amy Coney Barrett says she doesn’t classify Roe v. Wade as a “super-precedent” that would never be overturned, but says “scholars across the spectrum say it doesn’t mean that Roe should be overruled.” https://t.co/OFIhfeo130 pic.twitter.com/j2ayQncHK4

Um, could someone remind Klobuchar what RBG said about their precious Roe v. Wade? Because:

The seven to two judgment in Roe v. Wade declared “violative of the Due Process Clause of the Fourteenth Amendment” a Texas criminal abortion statute that intolerably shackled a woman’s autonomy; the Texas law “except[ed] from criminality only a life-saving procedure on behalf of the [pregnant woman].” Suppose the Court had stopped there, rightly declaring unconstitutional the most extreme brand of law in the nation, and had not gone on, as the Court did in Roe, to fashion a regime blanketing the subject, a set of rules that displaced virtually every state law then in force. Would there have been the twenty-year controversy we have witnessed, reflected most recently in the Supreme Court’s splintered decision in Planned Parenthood v. Casey? A less encompassing Roe, one that merely struck down the extreme Texas law and went no further on that day, I believe and will summarize why, might have served to reduce rather than to fuel controversy.

Ginsburg said that she believed it would have been easier for the public to understand why the Constitution protected abortion rights if it the matter had been framed as one of equal protection rather than privacy. And in fact, there was a specific case she had in mind as one that should have driven the national conversation, instead of letting Roe carry that weight.

She told the Senators that she “first thought long and hard” about abortion rights when, as a lawyer for the American Civil Liberties Union (ACLU), she took on Struck v. Secretary of Defense, a case that was on the Supreme Court’s calendar during the same term that Roe was decided. Susan Struck was an Air Force Captain who got pregnant while serving in Vietnam and sued the Air Force after it said she would have to either get an abortion at the base hospital or leave if she wanted to have the child. She told the Air Force that she didn’t want to get an abortion; she wanted to use the vacation days that she had saved up to give birth and then put the baby up for adoption because abortion violated her Roman Catholic faith.

Even the president of National Abortion Rights Action League wanted senators to make sure RBG will uphold the law that allows women the right to murder their unborn child.

RBG said in 2019 that Roe v. Wade “has pretty strong precedential weight by now.” Does that mean she considered it super-precedent? I do not know for sure, but the wording makes me think that RBG also did not consider it super-precedent.

Stick it to DEM Amy!

It shouldn’t even be regarded as precedent, since it was invented from whole cloth and doesn’t have good constitutional foundations.

What’s that got to do with it? A precedent means any decision the court has previously made. The principle of stare decisis means that no court should ever lightly overturn its own precedents.

Justice Thomas says that when it comes to constitutional questions he doesn’t believe in stare decisis, because that amounts to allowing the supreme court to amend the constitution.

A “super precedent”, in her view, is one that nobody even wants to overturn, so the question would never even come up. As she said, the fact that she’s being asked all these questions about Roe proves it’s not a “super precedent”.

Why isn’t most of the court’s effusiveness in Roe not considered dicta, and why can’t its actual holding be separated from it? Can dicta establish precedent?

No, dicta have no precedential value at all.

Talk about a dollar waiting on a dime. ACB is playing 3d chess and one of the lowest IQs in Congress and that’s says something. Klobuchar is so low IQ she starts her failed camping on climate change in a snow storm.

Hirono sets the floor for low IQ politicians. She just (barely) reads a diatribe written by her staff.

It’s early in ACB’s confirmation. I don’t know if I should say you overestimate or underestimate the other Dems on the committee when it comes to low IQ questions. Maybe it depends on which side of the shovel you’re standing. I fully expect one of the Dems to have a “hold my beer” moment and beat Hirono in the “low IQ pol” contest. Just saying.

“Um, could someone remind Klobuchar what RBG said about their precious Roe v. Wade?”
******
People forget and last time I looked it had been scrubbed from the “Web”, the opposition to RBG, other than Jesse Helms, was from the Radical Fems. especially NARAL. They felt that she was too moderate and went ballistic with RBG’s opinion that Roe was poorly decided. IIRC, they ignored the point that RBG felt that Roe relied on a questionable Constitutional right of privacy (Griswold v Conn.(?)) and could be overturned based on that. She felt that “due process and equal protection was a stronger foundation.

Our system is flawed in so far that forces a court to make a decision between two opposing opinions and sets of arguments, all of which may be wrong. Party A says, “Statute X is unconstitutional because of Y,” and is wrong because the statute under consideration isn’t unconstitutional for “Y” (even though it may be unconstitutional for reasons other than “Y”). Government might respond with an argument that is likewise faulty (which may or may not overcome Party A’s arguments). The court hearing the case must determine with which it should agree, and in doing so must produce a flawed product in its decision.

Hey Klobuchar — Dred Scott VS. Sandford was a clear-cut decision with only two dissenting (both R, BTW – just saying) opinions. Is that sufficient for it to be a “super precedent”?

If it weren’t for the Civil Rights Act of 1866, it probably would have been regarded as such.

The Ds prove time and time again that they don’t really give a flying fig about civil rights….

Um, it took a constitutional amendment to overturn Scott.

Because certain elements didn’t want to accept the Civil Rights Act as valid. If nothing else, the Act provided impetus.

Why is Klobuchar participating in a hearing that is, by her own estimation, a “sham”?

She a killer queen – Dynamite with a laser beam.

Pro-Life, Liberty and the pursuit of Happiness is a central directive in the national charter. Human life begins (“source”) at conception, and development of the nervous system, the presumptive seat of consciousness, around one month. Anyway, close the abortion chambers, tear down the walls, stand for those who are literally without a voice to protest, denied arms for defense, and standing to represent themselves. That said, unlike one-child, selective-child has been normalized.

And in fact, there was a specific case she [R.B.G.] had in mind as one that should have driven the national conversation,

This emphasizes one of the obvious weaknesses of allowing unelected oligarchies to determine national policy. There is no national conversation involved. The judicial junta rules by decree. Its decrees aren’t arbitrary, but they are still the ultimate word. The “conversation” is entirely one-way; that is, it’s not a “conversation” at all.

National conversations only occur when the electorate has an mechanism to participate—which is a defining feature of the concept of a “conversation.” The electorate converses mainly by removing those championing one side of a dispute from office. (And no, angry letters to the editor are not an adequate substitute.) An unelected judiciary cannot possibly fulfill this role.

Here’s why Roe v Wade is not a super-precedent: There is no such thing.

It’s like the tradition of treating nominees to the Supreme Court with dignity and respect. Even if everyone agreed on it, it would cease to exist the moment Democrats decided it was no longer convenient.

There is in the sense that Barrett used the term: A super-precedent is one that nobody seriously wants to overturn.

Not only should roe not be “super precedent”, the very concept of super precedent shouldn’t exist. No decision should be beyond questioning at least in part.

“Super precedent”?
Really???
DC Comics has poisoned the American mind.
The only “super-duper double-platinum atomic-mutant colossal mega-hyper jumbo-non-plus-ultra cosmic-warp-speed precedent” is the United States Constitution.
Calling anything “super precedent” simply puts it outside the purview of the Constitution, which is nefarious.