The appeal moves forward and will be briefed. It’s possible the result would be that the appeal is dismissed on procedural grounds when the panel rules on the merits, but the process is the punishment for Allyn D. and the rest of the Gibson family. 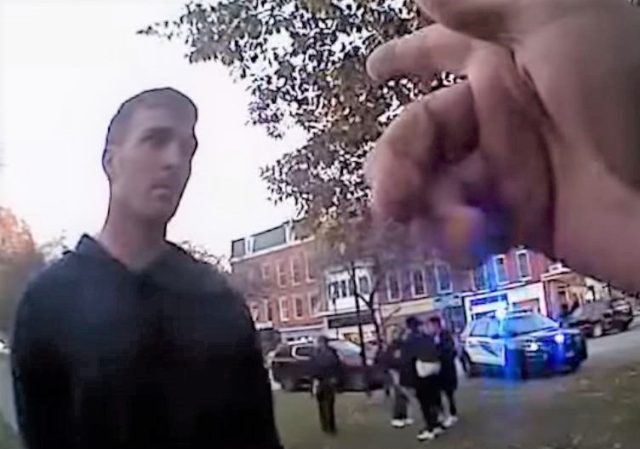 Oberlin College and its allies continue to fight to overturn the Gibson’s Bakery verdict, and to wage war on the Gibson family by unsealing confidential Facebook records of non-party Allyn D. Gibson.

The Facebook records technically are not being litigated by the College anymore — the College lost that issue in the trial court and did not appeal. Rather. it’s certain Cleveland Media entities, includinge a news station where the College’s lead trial attorney was a consultant, who are fighting to unseal the records.

For those of you new to this issue, Allyn D. was not a party in the case, did not testify at the trial, and the Facebook records were not offered as evidence at the trial. Oberlin College and the media entities want the records released as part of Oberlin College’s post-trial public relations effort to paint the Gibson family as racist. We don’t know what the records consist of, but the College seems to think it’s hot stuff, but not hot enough to offer at trial. This post-trial litigation of the issue is really sleazy.

Here are all our posts on the motion to unseal:

Our most recent post on that issue noted that the Magistrate Judge ordered the parties to address whether the appeals court had jurisdiction:

(MAGISTRATE’S ORDER) UPON REVIEW OF THE FILINGS, THIS COURT QUESTIONS ITS JURISDICTION TO CONSIDER THE ATTEMPTED APPEAL. SPECIFICALLY, IT IS UNCLEAR WHETHER THE ORDER APPEALED IS A FINAL ORDER THAT MAY BE APPEALED TO THIS COURT. THE PARTIES WILL HAVE 20 DAYS FROM JOURNALIZATION OF THIS ORDER IN WHICH TO FILE A RESPONSE ADDRESSING THIS ISSUE. IF APPELLALNTS DO NOT COMPLY WITH THIS ORDER, THE APPEAL WILL BE DENIED. SEE JOURNAL.

The parties briefed the issue, with some estoteric argument about Ohio appellate law.

The Gibsons argued (pdf.) that the media litigants did not have a right of appeal, they needed to seek a writ of mandamus, which they did not do:

“A person who is denied access to court records has a specific remedy” …. That specific remedy, identified by the Ohio Supreme Court is to pursue an action in mandamus, not a direct appeal…. This rule has been consistently upheld by courts across Ohio….

WEWS has not filed a writ of mandamus here. As such, because a direct appeal is not the appropriate remedy, WEWS’s appeal should be denied and dismissed….

The media litigants argued (pdf.) that they could use either direct appeal or mandamus:

Here, WEWS-TV also has an adequate remedy at law: appeal of the Order denying its motion to unseal Exhibit G, which WEWS-TV now pursues before this Court. “Through decisional law, the Supreme Court has indicated that the Rules of Superintendence are not designed to alter basic substantive rights.” … Where, as here, WEWSTV’s presumptive rights of access to Exhibit G stems from the First Amendment and the Ohio Constitution, the Rules of Superintendence do not alter WEWS-TV’s substantive right to appeal a decision denying those rights…. And, through this direct appeal, an adequate remedy exists in the ordinary course of law.

The Magistrate  issued his Order, essentially punting the issue to the panel that will review the appeal:

On July 20, 2020, this Court questioned whether an appeal is the appropriate
remedy to challenge the order at issue. The parties have now responded. Upon review,
· the Court defers the issue to the panel for determination during the final disposition of
the appeal.

Appellants’ brief will now be due 20 days from journalization of this order. 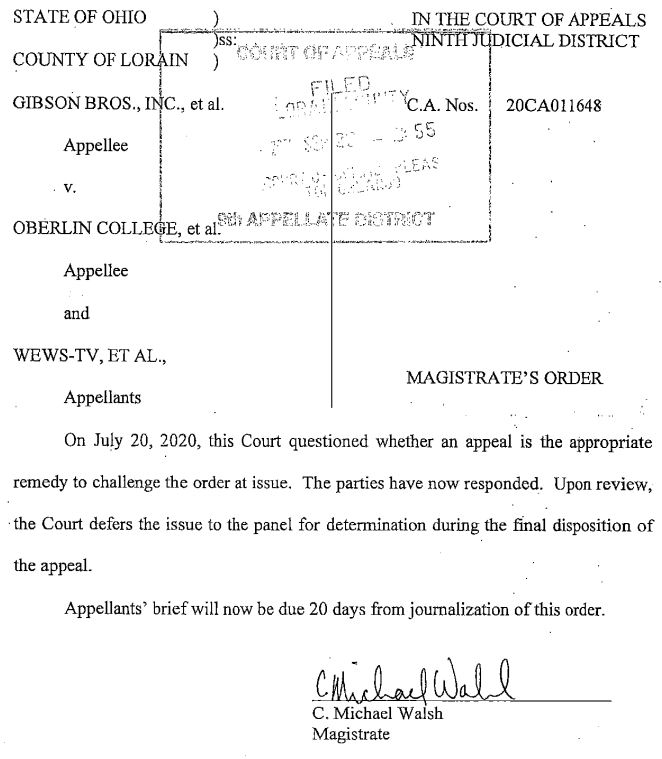 So the net result is that the appeal moves forward and will be briefed. It’s possible the result would be that the appeal is dismissed on procedural grounds when the panel rules on the merits, but the process is the punishment for Allyn D. and the rest of the Gibson family.

From the outset Oberlin has take a scorched Earth approach. I believe the even subpoenaed Mr. Jacobson.

I would suspect it happens sometime after all appeals have been lost since it would mean the leaker would be held in contempt of the court order and FB sued by the victim, with FB being a rich pocket.

Would love to follow the money trail for all of this. Not the front organizations but the puppet masters. With the hundreds of millions of dollars flowing to BLM…..this breathes new life and lies into protesting Oberlin.

Not sure what the media is going to do when they actually get this.

Since the start of this entire episode the doxing and personal destruction done by the media has been in constant overdrive to the point where they went from zero credibility to everyone believing they are pure evil shit buckets.

Seriously for as awful as this has been for the family, Gibsons should be thankful they didn’t get burned down by mostly peaceful protesters like all other businesses being singled out by leftists. How disgusting is it when what happened to Gibsons is the tamest race baiting scandal you can remember?

After this is all over, would it be possible for them to sue Oberlin again to recover all of the attorney’s fees accruing from the appeals process?

Since he was not a party to the original lawsuit, he would not have merit in that case. But as a private citizen, he would have merit to sue as a private individual for ruining his reputation. His family now have the financial resources to sue for all sorts of documents from everyone suspected in this frivolous lawsuit.

Sociopaths/bullies will control you or destroy you if you do not submit. Gibson’s is a “stand in” for any future enemies of the the Marxist thugs, enemies who might dare to win a battle rather than surrender. Oberlin is about power. Gibson’s is about truth and justice which is anathema to Oberlin’s handlers. This is predictable and will continue.

Very few people seem to understand how Antifa works, or how it is apparently hijacking BLM. Antifa is doing this by following the Maoist blueprint to the letter – a blueprint which worked beautifully in both China and Vietnam. BLM seems to have no idea that they are being used and betrayed by the money in back of Antifa. See my post at

They are still going after the hired help?

the process is the punishment
Yes. Because we have become a litigious society, evil people can use that to extract pain and anguish they used to only be able to achieve by actually arresting you and throwing you in a dungeon.