Trump Greeted With Boos, Heckling as He Pays Respects to Justice Ginsburg

Trump Greeted With Boos, Heckling as He Pays Respects to Justice Ginsburg 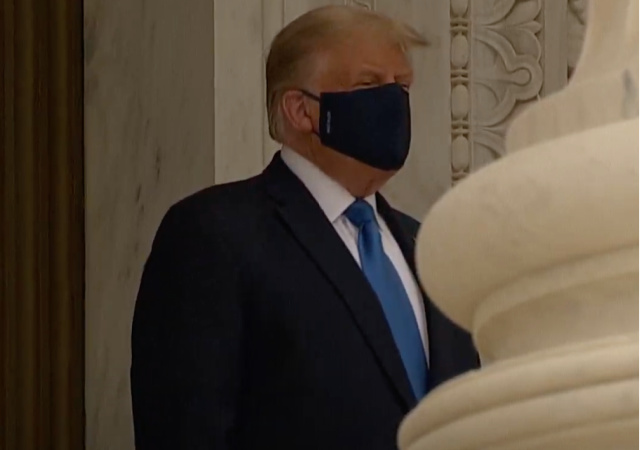 People greeted Trump with boos and heckles as he paid respects to Justice Ruth Bader Ginsburg in front of the Supreme Court building.

The people also chanted, “Honor her wish!” Ginsburg supposedly said her last wish is for the November presidential winner to pick her replacement.

Protesters are booing Trump as he is paying respects to RBG… pic.twitter.com/BG2t1qGVtJ

Trump – wearing a mask – is booed and met with chants of "Honor Her Wish" as he pays respects to Ginsburg at SCOTUS pic.twitter.com/SrigIAShBC

Loud boos and chants of "Vote him out!" as Trump visits Ruth Bader Ginsburg's casket pic.twitter.com/5ZhsaYW8iN

“Honor her wish”, like it’s a bedtime story or a movie. Dumbasses gonna dumbass.

notamemberofanyorganizedpolicital in reply to UJ. | September 24, 2020 at 1:51 pm

Wish all the electronic monitors and media there were hacked and played this over them in a loop Non-Stop over and over.

notamemberofanyorganizedpolicital in reply to wendybar. | September 24, 2020 at 1:53 pm

The political elites truly believe THEY are America… the rest is just statistics whether its land, people, deaths… we are just numbers. Anyone not loyal to the political class are unpatriotic

The unremitting hatred of Democrat/Socialist adherents is not surprising given Party commissars unwavering promotion of dysfunction. Lest you think these outbursts really have something do with Trump, remember the memes “I would have voted for McCain if not for Palin” and “Bush lies kids die”.

The feed on 1984 type slogans, hatred and dysfunction.

A Party of the Mob, for the Mob and by the Mob.

The democrats are not after trump

They are after us – trump is just standing in their way

slogans are what stupid ignorant people use instead of thought. As a psychologist, I estimate people’s intelligence by the number of cliches they mouth.

I voted FOR Palin – in spite of McCain….

The only pictures of Ginsburgs clerks were close ups, so you could tell what % of former clerks actually showed up

Looking at the available pictures comparing the two funerals, seems that Ginsburg had about 2/3 of what scalia had.

The wretched abortion lover should have been buried Monday, but her family like her cared little for their heritage.
Shonda

We dont speak ill of the death that what the left does. That being said I would much appreciate the facts not the “ring” kisisng.

Another Paul Wellstone moment. There is nothing these people won’t defile with their single-minded hatred of everything. Nothing is sacred. No dignity in death, even for one of their own. A suicidal death cult trying to take everyone else down with them.

I don’t remember my children behaving this badly. These people are supposed to be “grown ups”.

A friend suggested that when people tell me that they’re for Biden, ask them why except that they can’t mention Trump. He said that people questioned thusly get very quiet.

RickTheBear, I do something similar. Goes a little something like this,
Me: “Hey I see you are supporting Biden”
Random Biden Supporter: “Damn straight”
Me: “That’s great. He has been in office for 47 years. What are some of your favorite things that he has accomplished in those 47 years while in Washington DC?
RBS: Hmmmmmm. Well he’s not Trump!
Me: OK. I get that. You’re right about that, but being in office for 47 years including 8 years as Obamas number 2, surely you can let me know of just a couple of your favorite positive things he has done?
RBS: Positive things?
Me: Yes. Not the crime bill that he sponsored in the mid 90’s that disproportionately put young men of color in prison for non violent crimes that President Clinton, another Democrat, signed into law.
RBS: Crickets

He should have waved back and thrown kisses

It is better to mourn for the victims of Ginsburg’s injustice.

The left’s much-vaunted “love” and “tolerance” on display.

Another reason (as if one were needed) to move the nation’s capital out of DC to a new more centralized location. Give DC back to Maryland in the same manner that the Virginia portion was given back.

He will honor her request and install himself in 2021, no election needed

Stay classy DC. If the d/leftist/progressive folks actually gave a rip about Justice Ginsburg and her family v using her national tribute to display their rabid partisanship they could have waited.

Instead they chose to make a mockery of themselves and their allies because they don’t posses human decency. Great job guys!

Thanks for the assist in r turnout to vote for more Trump.

If “paid respects” means he visited, anybody would be tempted too, just to be sure she’s finally dead.

If it means he gave a little speech about how flippin’ wonderful she was, then even I might have considered throwing a raspberry his way.

Making a nasty old totalitarian like Gingsbug one of our final arbiters of things like the Bill of Rights has to count as one of the most grievous self-inflicted wounds in all of US history—right up there with electing Aaron Burr President in 1800. Thank You once again, Democrats!

Trump Greeted With Boos, Heckling as He Pays Respects to Justice Ginsburg
The left has no moral and no class. These children have never been taught manners. Their daiily temper tantrums show this.

Sorry, it appears my fat thumb may have down voted. I heartily agree with you, manners don’t exist among the mob.

Not to worry, though. These unbalanced freaks will likely be in charge of this great nation 30 years from now.

I may not be around by then (sorry, friends), so our mostly-responsible adult-acting children will have to man the front lines in our stead.

Which I think they’ll step up to do. But we’re more concerned about the state of the nation and world their children will grow into.

Everyone says Trump is an ill-mannered lout, but he had the decency to pay respect to Justice Ginsburg.

Obama, on the other hand, showed no such decency when he refused to attend Justice Scalia’s funeral.

And if memory serves, none of the Democrats who did choose to attend were heckled — although God knows they would have deserved it.

Trump is on the phone with Hillary.

Trump: What’s so important it can’t wait until the morning?

Hillary: I heard RBG passed away. I’d really like to take her place.

Trump: That’s OK with me, but I’ll have to check with the funeral director.

It simply does not pay to be ‘normal’ anymore.

Act like the left, only harder. We’ve got to beat them into submission. They’re trying to take us off a cliff.

Ginsburg’s loyalty to leftism meant she was often intellectually dishonest

I always felt a sense of dread when I had to read one of Justice Ginsburg’s decisions as part of my legal research. Her writing was turgid and convoluted. The worst thing about her decisions, though, was how she misused case authority to create new principles out of whole cloth. Nothing shows that more than in her determination to bypass our American Constitution and law and look to foreign constitutions, laws, and customs.

Ginsburg did not much like our Constitution, and she wasn’t shy about showing it. In 2012, Ginsburg showed up in Egypt, offering some “helpful” advice to the Muslim Brotherhood in Egypt as it was contemplating the Egyptian Constitution of 2012:

“I would not look to the U.S. Constitution, if I were drafting a constitution in the year 2012,” Ginsburg said in an interview on Al Hayat television last Wednesday. “I might look at the constitution of South Africa. That was a deliberate attempt to have a fundamental instrument of government that embraced basic human rights, have an independent judiciary. It really is, I think, a great piece of work that was done.”

In July 2010, Ginsburg spoke at the International Academy of Comparative Law at American University. Her thesis was that the Court should be free to look to foreign law and even blogs for authority when deciding cases involving issues confined with America’s borders, such as homosexual relations and the death penalty.

South Africa;s constitution was written by the communist ANC so I am not surprised Ginsberg liked it.”

Communist, Democrat, Communist….at this point what difference does it make?

“Your boos mean nothing; I’ve seen what makes you cheer.

Typical DemoKKKRAT lack of respect for one of their own who’s deceased because they hate President Trump and don’t care. These people have no respect, no honor and no conscience.