In fact, Trump has been calling on Biden to release his list of potential nominees for weeks. 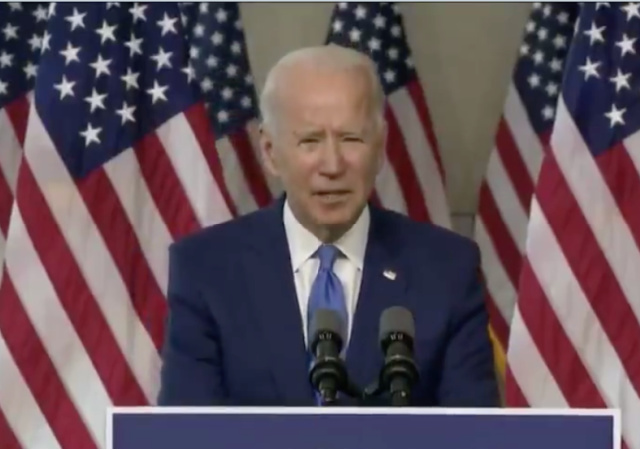 Joe Biden claims that President Donald Trump only asked for his SCOTUS list after Ruth Bader Ginsburg passed away on Friday.

Even CNN called out this blatant lie.

“We can’t keep rewriting history, scrambling norms, ignoring our cherished system of checks and balances. That includes this whole business of releasing a list of potential nominees that I would put forward. They’re now saying, after they — after Ruth Bader Ginsburg passed away, they said, ‘Biden should release his list.’ It’s no wonder the Trump campaign asked that I release the list only after she passed away. It’s a game for them. It’s a play to gin up emotions and anger,” he said.

He also said it would be inappropriate to release a list right now.

Biden falsely said today that “it’s no wonder” the Trump campaign asked him to release a list of prospective Supreme Court nominees “only after she passed away — it’s a game for them.”

Not true. The Trump camp had repeatedly asked prior to Ginsburg’s death.

Biden also falsely said: “By the way, there’s no Court session between now and the end of this election.” The court’s next session begins on October 5, nearly a month before Election Day.

In his Philadelphia remarks, @JoeBiden laid out his three reasons for not releasing a list of potential Supreme Court nominees: pic.twitter.com/Oe0l716CoO

Why, Biden? Because you know that SCOTUS is a top priority for voters and you don’t want to scare away moderates with a far-left nomination list? You already picked Kamala Harris as a running mate.

Biden also said SCOTUS does not have another session this year. It starts on October 5.

What did he do during the conference, Biden? Ask you for yours!

Well, Biden flat out lied about when Trump team asked him to release his SCOTUS list — looking forward to @ddale8 furiously typing away! pic.twitter.com/Eb0SoUaooK

Joe Biden has only a passing connection to the truth. He is well acquainted with political expediency.

One could charitably try to attribute his dissembling to his loss of mental acuity. But the has been lying for over 50 years in poltics.

I haven’t checked, but wouldn’t be surprised if even his lies are plagiarized.

notamemberofanyorganizedpolicital in reply to CorkyAgain. | September 21, 2020 at 6:17 pm

He’s deep into dementia so all the comments should be something like….”Biden Puppeteers Falsely Claims Trump …..

He has good company in the Democrat/Socialist Party. There is Disgraceful Dianne Feinstein and Nasty Nancy Pelosi. Their rage is boundless.

Biden has only a passing connection to his own mind.

notamemberofanyorganizedpolicital in reply to Wade Hampton. | September 21, 2020 at 6:18 pm

Ah, but he remembers sniffing……,

txvet2 in reply to notamemberofanyorganizedpolicital. | September 21, 2020 at 6:22 pm

That’s not memory, that’s nature – he sniffs hair like dogs sniff your crotch.

I think somebody else said it before Joe.
He isn’t known for original thoughts.

trumps list has been out for 4 years. Stop thinking you smarter than the rest of us your not.

Sinking faster than the Lusitania.

Since Joe leans very left, that would be “port” instead of “starboard”.

I thought of that after hitting Submit.

Does the Trump campaign have any good moles in the Biden camp? One who can get his hands on the list?

— Pamela Karlan (because Larry “Lost” Tribe is too old)

Karlan is the Stanford law prof who testified at the impeachment hearings. Known for her inability to tell a joke and her willingness to declare that the Constitution is itself unconstitutional.

“Karlan is the Stanford law prof who testified at the impeachment hearings. Known for her inability to tell a joke and her willingness to declare that the Constitution is itself unconstitutional.”

She is in good company –

It is unconstitutional for Michigan to add an amendment to the state constitution requiring compliance with the 14th amendment of the US Constitution.

Well, it DID happen in “JoeLand”. You just got to roll with it.

Just how poorly run is the DNC? It’s not like Ginsberg’s death snuck up on them. You’d think they’d be ready with a “Bam, here’s our list and we’ve vetted them all”.

Because to release an actual list, they would have to list actual people, and every Leftist Biden would be willing to appoint is dragging enough dirty laundry to sink the nomination.

Not necessarily a lie, or a memory lapse: the news hardly make it to the basement.

True. He has no outside aerial for his phonograph.

In his Philadelphia remarks, @JoeBiden laid out his three reasons for not releasing a list of potential Supreme Court nominees

Actually Trump asked for the list before Biden passed away.

notamemberofanyorganizedpolicital in reply to Connivin Caniff. | September 21, 2020 at 6:20 pm

Well Joe kinda forgets. So there is that. Rumor has it that his top three picks for the Supreme Court are Stacey Abrams (although she will have to give up the governorship of Georgia), Whoopi Goldberg, and Michelle Obama–in that order.

notamemberofanyorganizedpolicital in reply to Comanche Voter. | September 21, 2020 at 6:21 pm

Hey! The dead DEMS vote so……

Why does Trump, or anyone else, have to ask Biden to release his list at all? Why hasn’t it already been released as a matter of course during his campaign (if that’s what you call it)? Does such a list even exist? If so, why has it not been released? Is it not meant to be seen by the voting public?

According Rush today, speculation is that near or at the top of the list resides Stacey Abrams name. My gut says whether its Abrams, Obama, Holder or even Hilary, the Democrats who are handling Biden do not want the public to know. It would scare people away from Biden.

Nothing, certainly not native honesty, would prevent a Democrat presidential campaign from releasing a phony list.

Really. Trump used it to such good effect in his first campaign that you’d think every presidential campaign advisor would be recommending the tactic.

Biden is teasing the press by claiming he will appoint a female minority to the court when he takes office (provided that nasty Senate gets stopped). The proper follow-up question (that you will never hear from a member of our media) is “When Obama had an end-of-term SC appointment, why didn’t you press him to appoint the minority female you plan on appointing next year?”

It starts with Assata Shakur and ends with Stacey Abrams.

He may be right…..they’ve been playing “Weekend at Ruthie’s” since ’16, so anytime that DJT asked Biteme to release his list, she probably was already dead.
I thought the Jewish faith frowned on embalming…..

Will wonders never cease? Even CNN fact checked him. Let’s see if I can make this work: