No, a Cop Did Not Run Over an Anti-Trump Protester in California

No, a Cop Did Not Run Over an Anti-Trump Protester in California

“As the lead vehicle began to pull away, one of the protesters climbed up the hood of the patrol vehicle.” 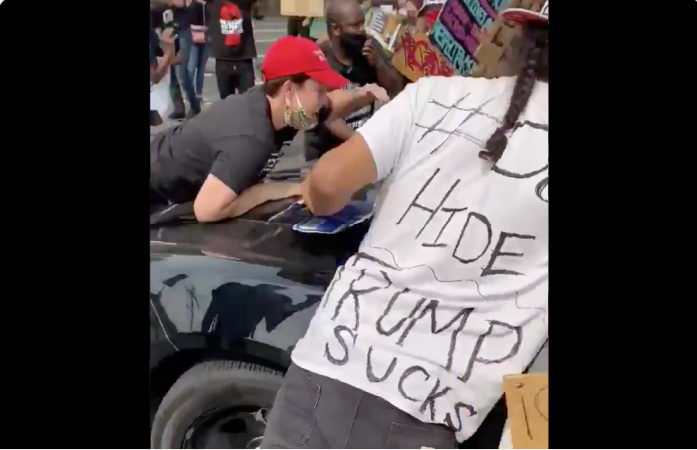 You may have seen reports of a cop running over an anti-Trump protester outside of McClellan Airport in Sacramento.

But if you look at the video it’s pretty obvious that the protester jumped on the car’s hood and then bore the consequences of doing so.

The protesters immediately shouted that the cop drove over the protester.

Look at this quote:

“We’ve had all kind of Trump supporters coming through, running us over, hitting us with their cars,” a protester and witness who declined to give her full name, said. “… the police, trying to turn over into our protest, we surround the cars, we get near the cars asking them to leave. They won’t leave, and next thing you know, they’re starting to drive through the crowd.”

Maybe don’t jump on the hoods of cars?

From The Sacramento Bee:

The incident involving the CHP cruiser also remained under investigation, [CHP Spokesman Officer A.J.] McTaggart said. Two CHP officers were conducting traffic control near the intersection of northbound Watt Ave and Airbase Drive and tried to leave the area, according to the CHP.

“As the lead vehicle began to pull away, one of the protesters climbed up the hood of the patrol vehicle,” McTaggart said in an emailed statement. “Fearing for his safety, the officer began to accelerate away and the protester fell off the vehicle.”

However, a second car “swiped at least two demonstrators.” Paramedics took one of them to the hospital. The crowd helped the other person.

California Highway Patrol began an investigation. The officers have contacted everyone involved but made no arrests yet.

NOW: Outside President Trump’s Sacramento arrival we saw vehicle swipe at least two demonstrators. Vehicle’s window was broken.
One demonstrator being taken away in ambulance. The other was treated by fellow demonstrators and appears to be standing now.
Stay with @kcranews pic.twitter.com/DNrSFGyabz

Vehicle’s window was broken.
Hmmmm, evidence something might have happened to induce the “swiping”? Maybe some people got way too dang close to the car as it was moving.

These idiots never had their mamas tell them not to play in traffic. This is the result.

(And, if you try to box me in – especially while contradictorially yelling at me to leave – I am likely to consider you a group of carjackers and defend myself with lethal force. Maybe that will be a car. Maybe not. But do NOT try to illegally detain me.)

I’m waiting for rioters to try that with some fellow driving one of those 4WD trucks with the raised body and huge tires. Sqwoosheta-mash-crushetta-splat-fwuppa-fwuppa-goosh…

Or maybe “mostly peaceful protestors” smashed in the window, scaring the crap out of the driver before he drove away?

Be cautious with these carjackers. A punk tried to carjack someone trying to drive out of a riot in Seattle (video proves the driver was avoiding rioters). The driver shot the punk and the BLM loving district attorney charged the driver. It was clearly self-defense (car jacker reached into window of car to grab steering wheel/keys/driver) and was a single shot. Driver made it to the police line and immediately surrendered himself.

Liberal playbook: A lie is always better than the truth.

Liberal Logic: “It’s not a lie if what you said would be true if the facts were different.”

I was trying to up-vote you, very sorry! Yes, I remember how disgusted I felt on hearing that. But then I’d always known he was not fit to be president.

A trap, a spectacle, for JournoListic lucre. This tactic was attempted in Miami with officers, too. And so many other jurisdictions in the months of protests. Charlottesville revisited.

the cop drove UNDER the retard.

Ha, well a police car with lights and siren on mean something? Duh? illegally standing in the road, duh? Harrassment? Duh?

Time to start charging everyone there. Make them go to court. Make their information public. Charge them with incitement. Charge organizations with putting people in harms way.

Criminal rioter. These are NOT protesters. If they are on the sidewalk or other area they are legally allowed to be, peaceably making their voices/message heard, that’s one thing. Entering the highway (yes, all public roads are highways in California) to stop traffic is illegal, an infringement on the rights of others to travel freely.

Well, the CHP vehicle did say “DODGE” on the front…

“No, a Cop Did Not Run Over an Anti-Trump Protester in California”

we surround the cars, we get near the cars asking them to leave. They won’t leave, and next thing you know, they’re starting to drive through the crowd.

I don’t care if the cop had run that person over. I wish he had. The law ought to openly permit drivers to run over anyone who is deliberately obstructing them from going about their lawful business, and refuses to move. Especially if the cops refuse to remove the obstruction.

I don’t care if the cop had run that person over.

Damn man I am Shocked, Shocked to see you declaring that Death Race 2021 has begun…..

Seriously though if a gaggle of goobers are blocking the roadway, disrupting traffic, harassing drivers and preventing their lawful movement…..what did these folks expect? The stark images of Reginald Denny pulled from his vehicle and beaten by a laughing mob still remains.

We have had more recent episodes of the mob violence over the last few months that are as bad or worse. A sensible person would not stop due to the risk. The local government needs to make.a concerted effort to stop this flash mob TCP. Too much potential for violence and injury to simply let it play out.

And this wasn’t just a commuter this mob sought to harass. This idiot sought to obstruct the police responding to an emergency. I hope they radioed for backup to arrest the little punk.

Remember the Minoan art of the bull jumpers? Antifa and BLM are not in the same league. I wish I could post the picture but around the Web is a Dodge Ram .. white with an impressive splashes of red over front and hood of vehicle.. titled… Dodge Protest 2020 Edition. All it needs is a few black smears to make it perfect.

If you are in a hostage situation, the law allows you to do whatever you have to do to free yourself.

My real question about this incident is why there haven’t been arrests for filing false police reports?

And if they did run the guy over?
What’s the problem?

Mostly paperwork for the officer. But aside from a sloppy dismount, the gymnast walked away with, maybe, scrapes, bruises (physically and ego), and the sure awareness that surfing a police cruiser is probably not a wise move.

These protesters blocking the streets are all good candidates for Darwin awards. Do they want to get run over by cars to prove their fidelity to the Cause??

Well that was certainly cheery! Hope it hurts like hell and that he will try again.

Tough noogies Dude. You shouldn’t try to hang ten and surf on the roof of a police car.

I can’t believe how incredibly dangerous that was. That debris could have easily damaged an expensive light bar which now may leak due to the un-natural stress it received as the debris went over it.

This is all part of the plan. Push and push and push until the situation escalates. Then blame the people you’ve been pushing for the escalation.

And all that cost of one terrorist. (Can’t tell from the video clip but it looks like the guy is likely to survive, through no fault of his own).

Win-Win for the terrorists masquerading as protesters.

The proper response to such passive-aggressive baiting is to crack down on it so hard that even if it’s the response the baiter wanted, he won’t do it again. It wasn’t worth the hospital bill.

The look on people’s faces – OMG, I never thought a car would overpower a human being! It’s like they were introduced to reality for the first time. Never knew it existed.

“Reality is that which, when you stop believing in it, doesn’t go away.”

My dad taught me that there are only 3 laws, and they all have to do with physics. Everything else is merely a suggestion. The test of this assertion is a crosswalk, where the law (suggestion) of pedestrian right-of-way is tested against the law of inertia.

We learned early on that if we got hit by a car, it was still our fault, even if the driver was charged with a crime. I have taught my son that you do not enter a crosswalk until you have observed the car visibly slowing down, and better yet, made eye contact with the driver to confirm that both of you are on the same page.

If someone could report the car surfer has kicked the bucket my day would be perfect.

That is what should happen to every peaceful rioter playing in the street.

The incident involving the CHP cruiser also remained under investigation

Whatever the details may turn out to be . . . I don’t see a problem with any version of this event.

It’s all more or less in the “it’s about goddam time” department.

“We’ve had all kind of Trump supporters coming through, running us over, hitting us with their cars,”

Sweet cheeks, if a bunch of Trump supporters had come through with the intent of committing severe bodily harm, not one of you would be in any condition to talk about it afterwards.

It’s about time somebody invented a game of seeing how many rioters you can get with one pass. You could call it “Bowling with BLM” or some such.

The deputies were not driving…they were traveling.

“Consequences” obviously weren’t a big focus at the homes (caves) of these imbecilic animals. Look at the bodies that swarm the area after the guy bounces off the pavement – this is not the upper echelons of humanity ladies and gentlemen. These are the dregs of society – obesity, mentally challenged, physically incapable, etc. Hate to say it but there would be no great loss if any were to be “removed” – in fact, the world would breathe easier.

When rioters attack a moving vehicle and bounce off the fender, is it really the vehicle “swiping” them?

In a dystopian future, a cross country automobile race requires contestants to run down innocent pedestrians to gain points that are tallied based on each kill’s brutality.

These poor dumb losers are paid agent provocateurs. They are serving as evil people’s useful fools.

Someone put a Darwin award next to their hospital bedsides.

“No, a Cop Did Not Run Over an Anti-Trump Protester in California”

The cop didn’t? This gives Arminius the sadz!

Too much Charger, not enough Dodge.