“In a speech given in Warren, Democratic nominee Joe Biden on Wednesday unveiled a plan to tax companies that move work overseas at a higher rate and reward those that bring jobs back into the U.S.” 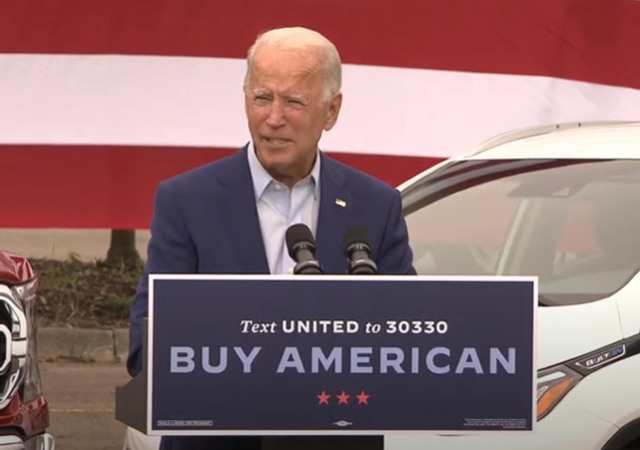 Have you been listening to Joe Biden’s economic message lately? If you have, you may find that it sounds a bit familiar. It almost seems like Joe is going to say “Make America Great Again” any day now.

They say imitation is the sincerest form of flattery, but in Biden’s case, it just sounds like his latest attempt at plagiarism.

In Michigan, Biden even spoke in front of a sign that said “Buy American” and threatened to tax companies that move jobs overseas. Where have we heard that before?

In a speech given in Warren, Democratic nominee Joe Biden on Wednesday unveiled a plan to tax companies that move work overseas at a higher rate and reward those that bring jobs back into the U.S.

In any other campaign, it would be a proposal directly from the Democratic playbook, but given that President Donald Trump has made the same claims a central part of his presidency, it came as a frontal assault on Trump’s economic record in a state the president won by just two-tenths of 1% four years ago…

Biden, the former vice president, met Wednesday afternoon with UAW members and held a roughly 26-minute live-streamed campaign event at the union’s Region 1 headquarters in Macomb County. The campaign stop came one day ahead of a Trump rally scheduled in Freeland, near Saginaw…

Throughout his 2016 campaign and four years of his presidency, Trump has made a key component of his agenda returning jobs from overseas, especially manufacturing jobs, saying he would target companies, including automakers, who moved U.S. production out of the country.

Democrats and the Biden campaign are figuring out way too late that they have done nothing to win back the working class voters they lost to Trump four years ago.

Does Joe Biden think America slept through the eight years of the Obama presidency, along with the media? Obama and Biden did nothing to stop the flow of jobs out of the United States. One could even argue that their policies made the situation worse.

Yet now Joe wants to be taken seriously because he’s standing behind a ‘Buy American” sign? Please.

Biden and Democrats still don’t understand that Trump is trying to fix problems they created. He is already doing it. We don’t need them.

Trump is already doing all of this. https://t.co/OV8WPHxBaN

They are years too late for this.

That ship sailed long ago.

Slow Joe pulls out the old playbook. Plagerize. Now a days, with his dementia, he gets new ideas every day. Meets lots of new people too.

Next they’ll say Trump supporters are making fun of his disability.

notamemberofanyorganizedpolicital in reply to NGAREADER. | September 13, 2020 at 5:13 pm

Same Message: “All My Heroes Kill Cops”… – the last refuge

In his present condition, Slow Joe no longer plagiarizes, recognizes, memorizes, summarizes or authorizes. He now depends on handlers to guide, hide, provide, decide for him.

Handlers; chaperones, marionette-operators — whatever one calls them, they are the ones pulling the strings of their dim-witted, dotard-marionette, from behind the curtain.

He’s also lying, so there is that. The Democrats have ZERO intention of doing any of that. It’s a trap….

Yup, a naked attempt to fool middle-America and stem the bleeding of blue-collar voters who are continuing to move from the Dim party to Trump.

Hopefully they won’t be fooled. Biden’s family is up to their elbows in the Chicomm cookie jar; the globalist agenda will be what they push. And don’t forget all the promises he made to the radical left in order to get the Bernie Blows on board.

I dunno, he does have a fevered strategy since I am thinking of voting thumbs down for Biden more than ever before.

I am sure in Biden confused state of mind that will cancel out my thumbs up vote for Trump for sure when I cast my real and in person early vote in October.

This imbecile is flip-flopping at light speed, as ordered by his marionette-handlers. Promises to ban fracking, during the primary, to pander to his fanatical base of zealots. Changes his tune during the general election campaign, as polls show him losing votes in Pennsylvania. Did the same exact thing, with his idiotic and totalitarian mask mandate. And, did it yet again, with an insincere, hollow and tardy “condemnation” of the very same goose-stepping, nihilistic rioter-thugs whom Biden and the Dhimmi-crats have been egging on, ginning up, and, lionizing, for months, as soon as polls told him it was beneficial to do so.

Yeah, I think I will vote for the guy who is actually implementing those policies versus the guy who never has.

Yep, I’ve watched this very speech on Fox News for a few minutes – there were about 3 or 4 people present. And they were pretty bored…

notamemberofanyorganizedpolicital in reply to DanJ1. | September 13, 2020 at 5:17 pm

It’s always the same two phrases, “Worked to” or “Fought for”. Even if it’s just introducing bills or amendments that go nowhere, they’re working and fighting.

I bet if you checked their voting records, they voted against a whole lot of things they claim to be working/fighting for because politics.

Quid Pro Joe has been doing that all year. To him, METOO means what Trump said

This is the same old playbook the left have used for ages. It is also in the second chapter that they will reverse course once elected and do the complete opposite of what they claimed they were going to “for the children and the country”.

Dementia Joe doesn’t even know what he is saying, he just reads the parts given to him by his smarmy handlers. It’s why Kamala won’t answer any questions at all. Why Dementia Joe only goes with softball interviews which he knows the questions in advance and his teleprompter give him the words to mangle through.

Reputed former Biden staffer says it is way worse than what the public guesses.
https://archive.4plebs.org/pol/thread/276699459/?fbclid=IwAR1PBnRYDno2_TDf813xdjLa53sac6XQ69zHCHs6xoSq7imbooNM78JgNBI#276731407
This is a must read. Discusses Biden’s campaign strategy to deal with Alzheimer.

notamemberofanyorganizedpolicital in reply to puhiawa. | September 13, 2020 at 11:36 pm

“Even with COVID, in-person meetings are the norm. They don’t want to do anything on Zoom either, in case someone records it. Everyone is suspicious of each other, and nobody likes to give specifics on anything. It was frustrating.

Two – All of the Bernie bros joke about being “another Seth Rich”.

Three – There are people whose job is to digitally de-age Biden for political ads.

If you saw a recent speech for Joe and though he looked like a mummy, then saw snippets of the same speech in an ad, you might have noticed he looked a lot better. That’s because they contracted VFX artists from California to de-age him. Normally I wouldn’t begrudge them this, as I’m sure all campaigns try to make their candidate look good. But, considering what they’re really covering up…

Four – Joe Biden is in the early stages of dementia, and is on medication for it…..

So after the two LA cops were ambushed, Biden decides to campaign on gun control.

This is the point where I firmly believe he will lose the election. Gun sales are up over 300%, mostly with first time buyers. You can’t even buy 9mm ammo.

Hm…I wonder how, in their world, Biden saying “If you elect me I’m going to keep doing what Trump is doing now” is a “frontal assault”.

Sounds more like agreement to me. “Trump’s right and so I’ll do that too”.

Not much of an assault if you ask me.

Trump’s ideas are so bad Biden is copying them?