AMP serves as a coordinator and crucial link among numerous anti-Israel groups. Yet its activities, including lobbying, are not well-known.

American Muslims for Palestine (AMP)—one of the most radical and controversial anti-Israel groups in the United States —spent this past week training anti-Israel activists to send them into lobbying meetings with members of Congress. Among AMP’s partners in this effort were the anti-Zionist Jewish Voice for Peace, UNRWA-USA, and even the NAACP.

Introduction: What is AMP?

An organization with a far reach into campuses and radical leftist organizations, AMP has been the subject of numerous LI posts dating back several years. We documented AMP’s involvement in organizing protests and disruption of the Christians United for Israel Annual Summit in July 2019 in Investigation: Anti-Israel groups plan disruption of Christians United for Israel Annual Summit. That post has a section devoted to AMP’s origins and leadership, including its role in Students for Justice in Palestine (SJP). You can also read about AMP influence on SJP in Investigation: ‘Students for Justice in Palestine’ Locked Down Its Annual Conference, What Was It Hiding?

In addition, AMP co-organized the U.S. Tour for Janna Jihad, which we covered in Rewarding Palestinian child exploitation: Janna Jihad goes to Congress. And, when AMP threw me out of its Rashida-Tlaib-keynoted conference in November 2019, we covered the event in Fearing Negative Coverage, ‘American Muslims for Palestine’ Conference Ejects Legal Insurrection Reporter and Rep. Rashida Tlaib Keynotes ‘American Muslims for Palestine’ Conference Devoted to Destroying Israel.

This past week has brought a new round of AMP antics in the form of Virtual Palestine Advocacy Days: a full week of anti-Israel congressional lobbying over Zoom, including a virtual “training session” for the assembled anti-Israel activists, and a live-streamed congressional plenary featuring remarks by Reps Betty McCollum, Debbie Dingell, Judy Chu, Rashida Tlaib, André Carson, and Donald Payne, Jr.

Normally, AMP conducts their annual lobbying week in person (usually in the spring, perhaps as a foil to AIPAC’s long-standing early March congressional visits). I wrote about the 2019 version of the event with my former Middle East Forum colleague Dr. Oren Litwin. In our piece, Dr. Litwin and I summarized AMP’s close links with the Islamic Association for Palestine (IAP), a now-defunct Hamas front in the United States. We also pointed out several notable participants in the 2019 proceedings, including Popular Front for the Liberation of Palestine (PFLP) acolyte and Electronic Intifada blogger Joe Catron, and Reps Athena Salman and (to nobody’s surprise) Rashida Tlaib. (Incidentally, when AMP exiled me from their November 2019 conference, AMP staffer Munjed Ahmad justified the decision by referencing that very article, claiming it was full of “lies”, and arguing that its contents indicated I wouldn’t be writing “anything positive” about AMP’s 2019 convention, so I would not be permitted to participate. He neglected to mention anything specific the piece had mistaken.)

This year, the coronavirus forced AMP to postpone its annual springtime lobbying effort and eventually take it completely virtual; this enabled me to sign up and listen in to each piece. Signing up was easy; I paid the $11 fee, used my real name and LIF email address, and wondered how long it would take AMP to notice my quiet presence. 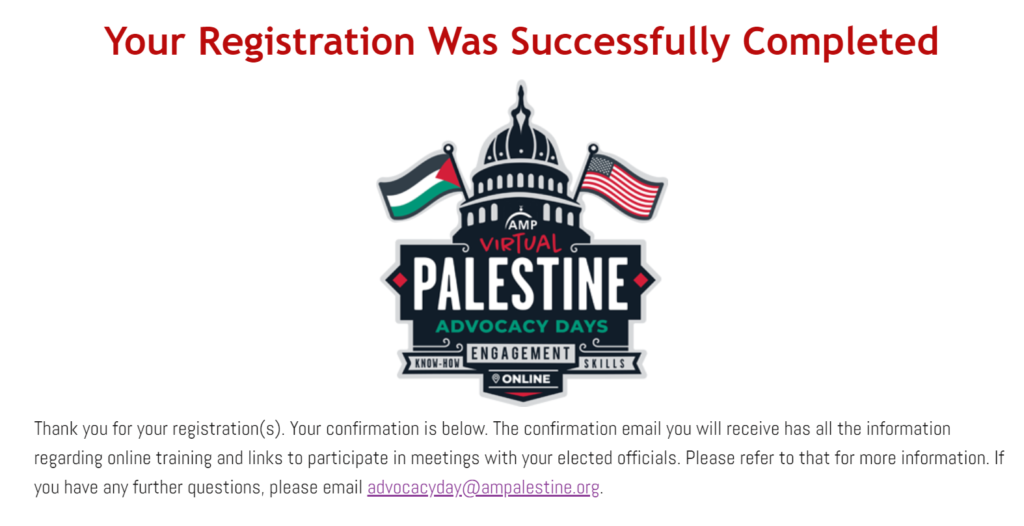 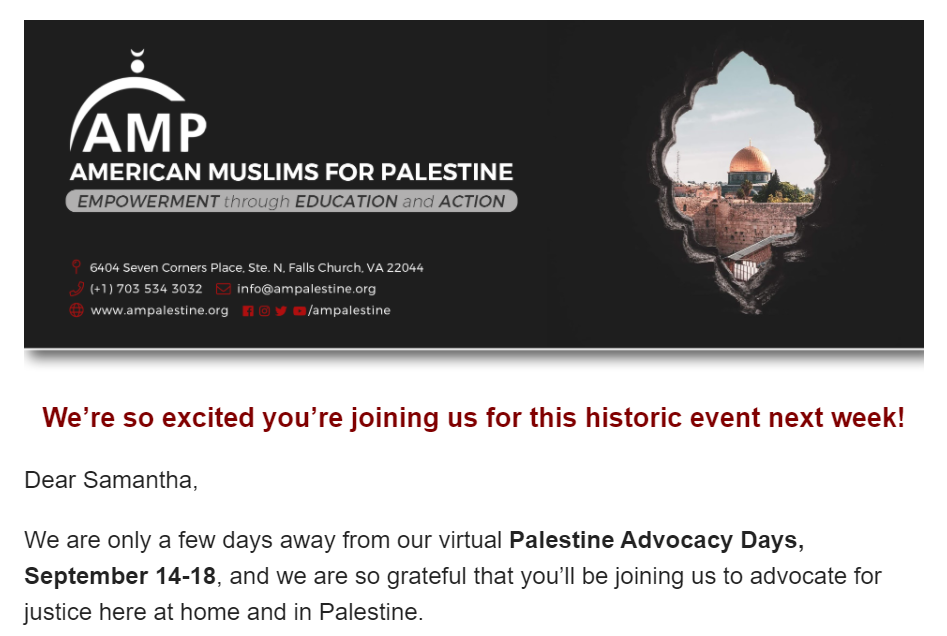 On Monday, I was able to tune into the first part: the private activist “training” session. The two-hour Zoom call featured cameos by many of AMP’s primary staff delivering what I can only assume were meant to be inspiring speeches about the nobility of the Palestinian cause and the evil of Israel.

[A screenshot of Felicia Eaves speaking to the audience during the AMP “training” session.]

Speakers lauded the assembled activists and staff as “an integral part of the intersectional Palestine solidarity movement”; proclaimed their “honor” at being asked to participate in AMP’s event; declared their goal of “shift[ing] U.S. foreign policy to be centered on justice and equality for all people” and fawned over congressmembers who “are naming Israel for what it is: a country which has imposed a brutal system of apartheid on the Palestinian people”. 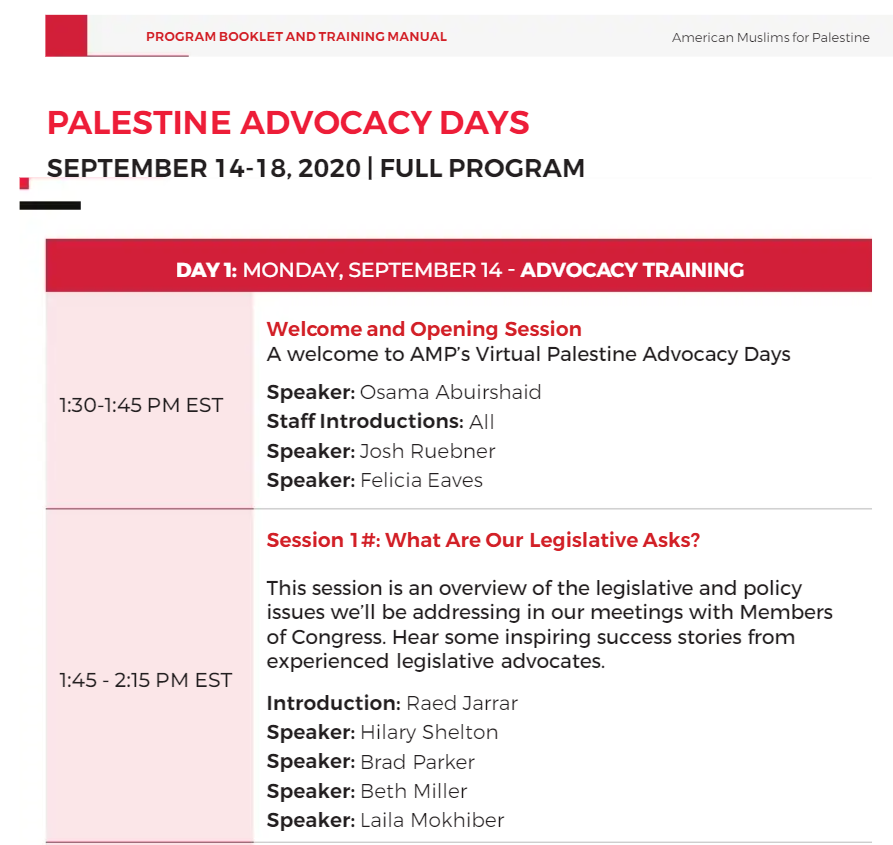 Most of the discussion focused on the  “asks” AMP assigned to the lobbyists—requests to make of members of Congress or their staff for support or rejection of particular bills. A majority of the “asks” revolved around bills or proposals that portray Israel as a racist and militaristic oppressor. AMP “talking points” and summaries—presented to lobbyists in a program manual—asserted (without evidence or examples, naturally) that Israel “systematically…abuses” children as a matter of policy, and that it is “the only country in the world” to do so.

As is usual for AMP, nowhere in its manual, training session, or any other associated materials was there a single mention of Hamas, its despotic rule over the people of Gaza, or its stated goal of murdering Jews; the Palestinian Authority and its many rejections of Israeli proposals for sustainable Palestinian statehood; or the numerous attempts and pledges by much of the Arab and a Muslim world to exterminate Israel entirely. None of these crucial omissions seemed to bother any of the speakers. 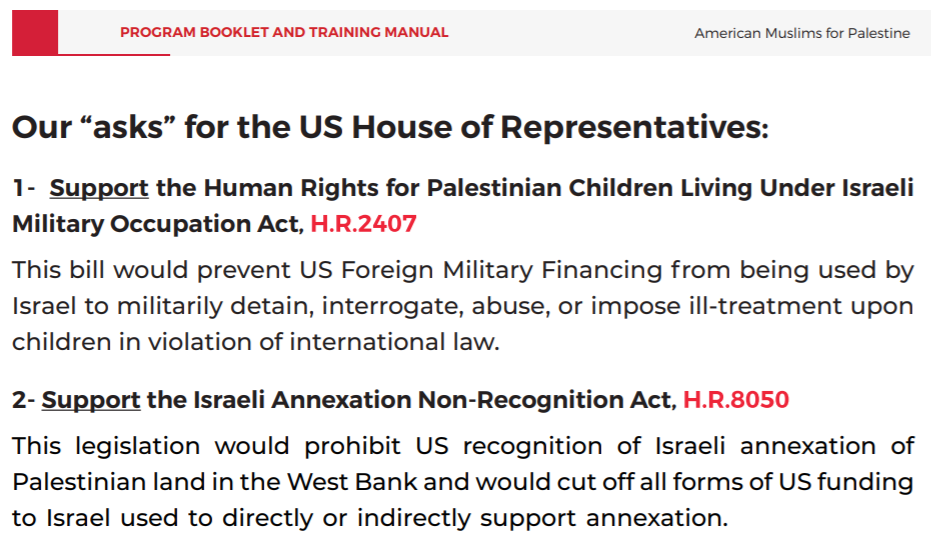 Besides pushing its standard anti-Israel narrative, AMP justified its self-identification as an “intersectional” movement by incorporating an unrelated bill into its agenda: the NAACP-supported George Floyd Justice in Policing Act. Preparatory emails AMP sent out provided links to the NAACP’s work on the bill. 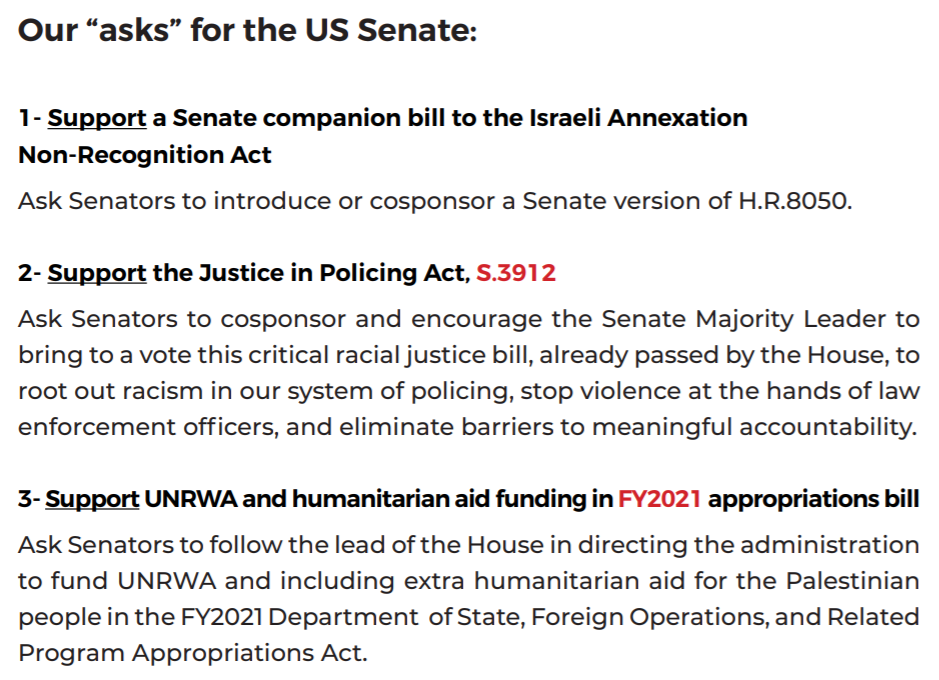 The full AMP program manual can be perused below.

Tuesday’s congressional plenary, which was live streamed on Facebook and YouTube, featured a few members of Congress speaking alongside some of the most extreme anti-Israel ideologues AMP has to offer. 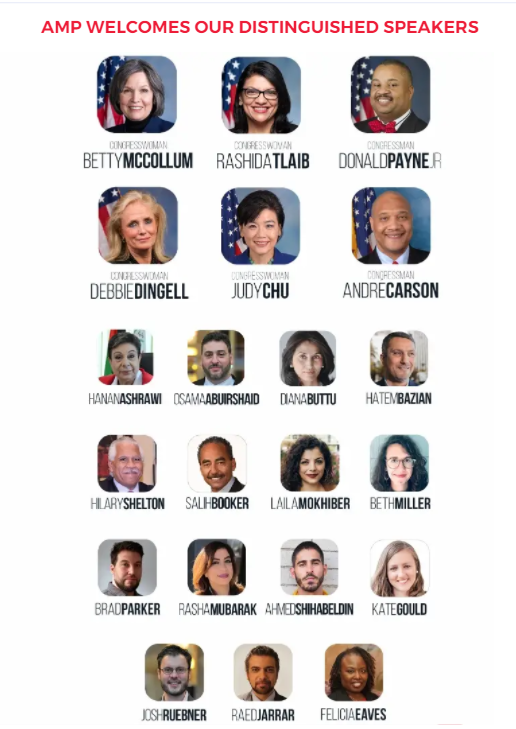 Frontpage Mag highlighted a few of the most notorious participants:

AMP is a part of the US Council of Muslim Organizations (USCMO)…Representing AMP on USCMO’s Board of Directors and speaking at Tuesday’s virtual advocacy event is AMP Executive Director Osama Abu-Irshaid, who, last month, called Muslim leaders, who support UAE peace with Israel, “dirt bags” and “traitors.” Prior to AMP, he served as editor of Al Zaytounah, the official newsletter of the Palestine Committee’s Islamic Association of Palestine (IAP). This past January, Abu-Irshaid stated at an AMP event, “Palestinians, if they don’t take what they want willingly, they will take it forcefully. We promise you this, we’re going to liberate our land and we’re going to liberate our people, whether they like it or they don’t like it. Well, they have picked the wrong enemy!”

Also speaking at the AMP’s virtual advocacy event is PLO Executive Committee Member Hanan Ashrawi. Under the Anti-Terrorism Act of 1987, which is still law, the US government designated the PLO a terrorist organization and a threat to America. Ashrawi, herself, has been labeled an “apologist for terror.” During a November 1991 interview with the New York Times, Ashrawi dismissed Palestinian terror as “essentially a human voice” and a “cry from the heart.” She said, “Desperate people commit desperate acts.” In May 2019, Ashrawi’s American visa was rejected and she was denied entry into the US.

Another speaker at AMP’s event is Muslim activist and National Committeewoman for the Florida Young Democrats (FYD) Rasha Mubarak. Mubarak has made a number of statements claiming that Israel, a sovereign nation, has no right to self-defense, and she has attacked prominent figures on social media for saying otherwise. In November 2012, Mubarak tweeted, “Lies I’m tired of hearing, Israel has the right to defend herself.” She has posted pictures of Hamas celebrations, and she has had involvement in Hamas-related groups, CAIR and Islamic Relief. This past July, Mubarak retweeted an infamous call for violence in the US made previously by 60s radical, Kwame Ture.

The full video of the event can be seen below.

For the congressional meetings, AMP matched each lobbyist with their specific representatives, and set up joint Zoom calls with lobbyists to present their case to relevant congressional offices together. These were the meetings I was assigned: 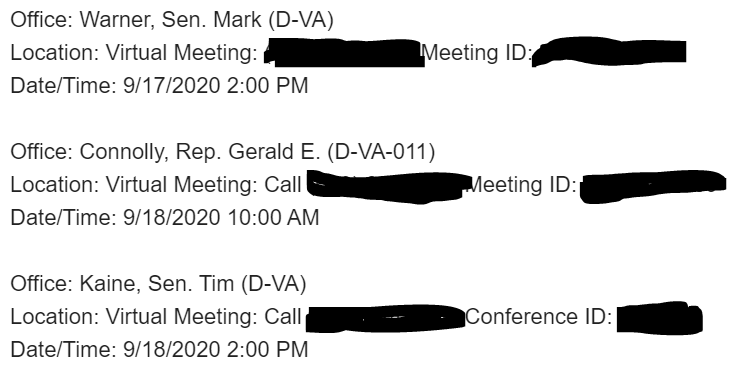 AMP set up a virtual dashboard each lobbyist could access by logging in with the email address they had used to register for the event initially. In the dashboard were updates about meeting schedules, congressional bios, and more background on the “asks”. 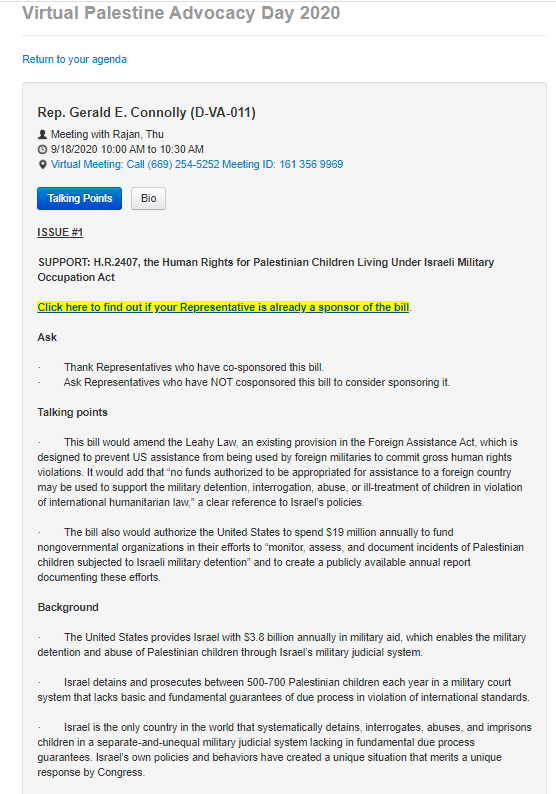 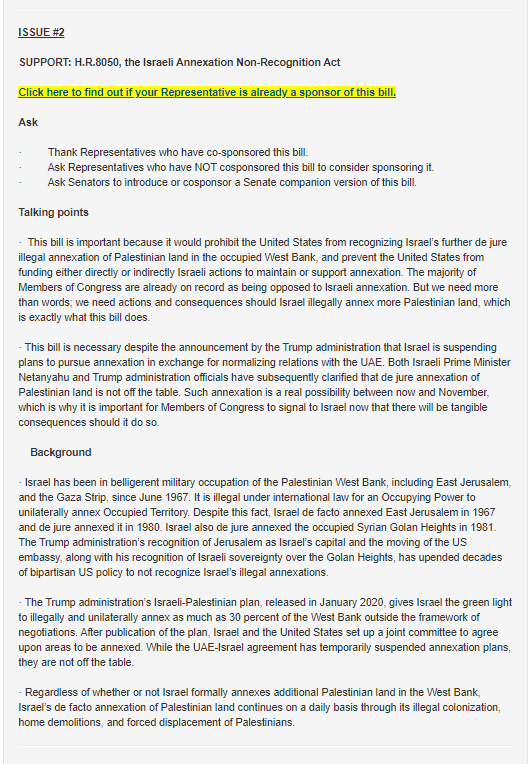 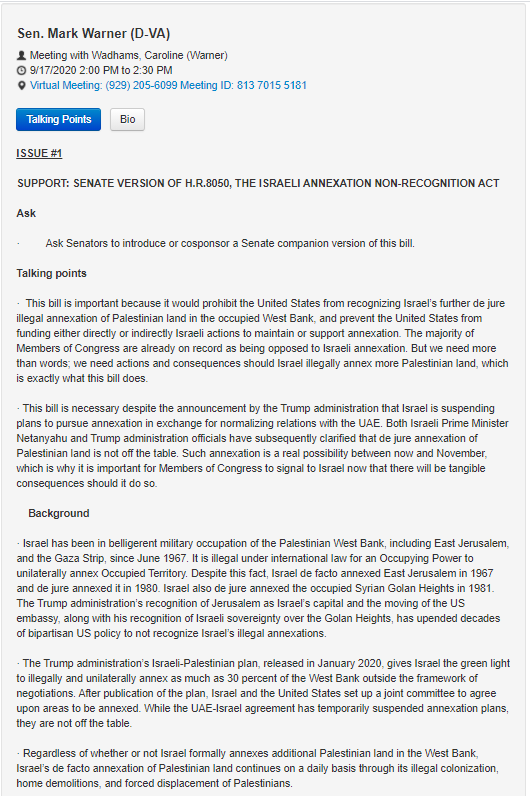 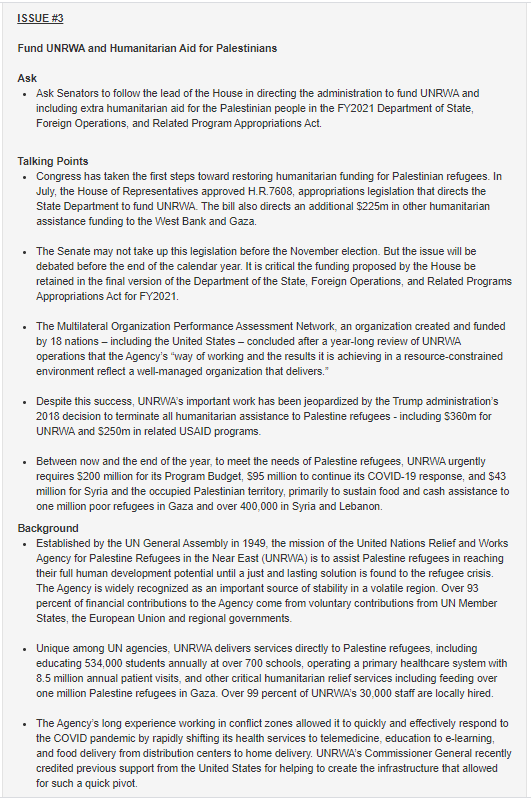 Initially, I was able to access my first scheduled congressional meeting on Zoom and settled in to watch and listen. I was joined by several self-identified members of a local group called the Virginia Coalition of Human Rights (VCHR); according to its website, VCHR proudly attended and presented at a 2019 conference aimed at “transcending the Israel Lobby at home and abroad” and is part of a coalition that includes anti-Israel groups such as AMP itself.

The meeting itself was uneventful until the AMP meeting hosts realized there were “infiltrators” in their midst (two of my former colleagues from Middle East Forum had joined the meeting as well). At that point, I was expelled from the meeting an unable to re-enter.

I was not able to log into the Zoom rooms for my two other scheduled congressional meetings; and I tried to log back into my dashboard, but the system would no longer accept my email address. It seems AMP had finally realized I was not just another devoted fan. 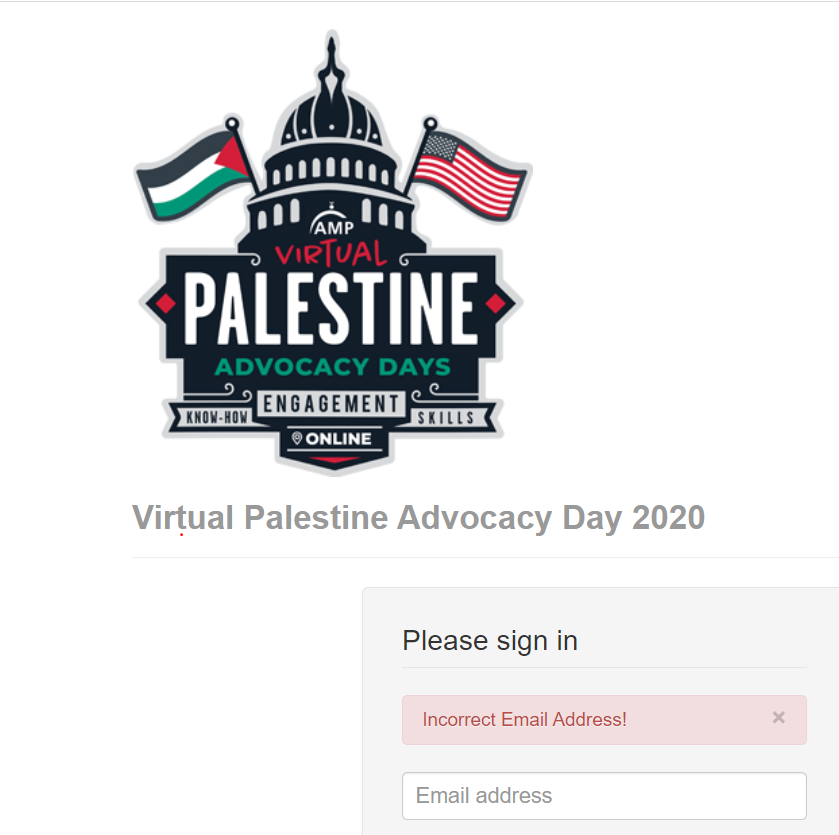 Indeed, on Friday, I received an automated email notifying me that the fee I had paid to register had been refunded.

AMP serves as a coordinator and crucial link among numerous anti-Israel groups. Yet its activities, including lobbying, are not well-known.

We hope to publish more on AMP’s lobbying efforts, and continue discussing this particular AMP event in a later post.

Why don’t you join events like these under a different name, and with pro-Palestinian credentials?

As a Jew on Rosh Hashana, I cannot wish for an explosion to wipe these people out. Too bad!

I am not Jewish, but I sure as hell recognize Jews represent a huge asset which benefits all of humanity.

I can, and do wish for eradication of these barely human people who constantly scheme and who produce nothing of value.

Militants should be terminated, they are not blowing themselves up fast enough.

As to Muslims for Palestine, they are one of many subversive organizations abusing America’s good nature.

Their nonprofit status should be revoked.

Islam which insists as a package deal of law which runs counter to our laws should be declared a cult and handled appropriately.

Naturalization should be conditional on the first two generations not committing any crime, and both generations being expelled if there is crime.

These people are subversives, no goods out to co-opt western civilization. There is ample evidence of their nature. It is foolish to ignore this.

This is a great question. We decided that honesty is the best policy for attending these events. Better not to engage in deception or subterfuge, especially because AMP and friends’ operational security is bad enough that we are able to get plenty of information even without disguising our identities.