“dozens of gatherers turned out in the dark after the Senator expressed over the weekend that he’d support Pres. Donald Trump’s nomination to replace the empty seat on the U.S. Supreme Court” 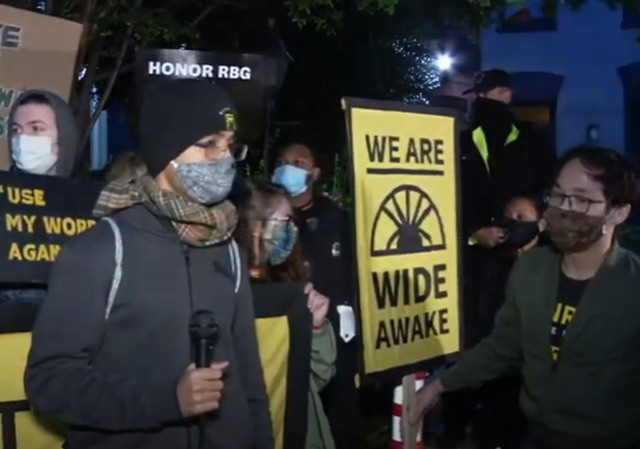 The ground troops of the Democratic party are now showing up at the homes of Senator Lindsey Graham and Majority Leader Mitch McConnell.

The media insists on calling these people protesters, but that’s not correct. These are angry mobs meant to intimidate and inspire fear.

There appeared to be around 100 demonstrators at his residence equipped with megaphones and signs.

“We are standing outside his house demanding that just like during the Obama administration he wait and let the next president decide the Supreme Court pick,” said protester Skylar Davis.

The demonstration comes after McConnell pledged to quickly bring to a vote to whomever Trump nominates for Supreme Court Justice in a statement regarding Ruth Bader Ginsburg’s passing.

“Americans reelected our majority in 2016 and expanded it in 2018 because we pledged to work with President Trump and support his agenda, particularly his outstanding appointments to the federal judiciary. Once again, we will keep our promise. President Trump’s nominee will receive a vote on the floor of the United States Senate,” McConnell said.

ABC 27 reports on what happened at Lindsey Graham’s house:

On Monday morning, protesters and activists gathered outside the Washington, D.C., home of South Carolina Republican Senator Lindsey Graham to “wake him up” with pots and pans, strobe lights and audio recordings.

The dozens of gatherers turned out in the dark after the Senator expressed over the weekend that he’d support Pres. Donald Trump’s nomination to replace the empty seat on the U.S. Supreme Court after the death of Justice Ruth Bader Ginsburg.

Democrats and protesters alike say this is hypocritical, given that Graham backed Sen. Majority Leader Mitch McConnell’s blocking of President Barack Obama’s 2016 nominee, Merrick Garland, due to the Presidential Election being several months away.

The protest event, was called “Wide Awake,” and protesters were seen banging pots and pans, yelling and playing audio of 2016 quotes from Graham.

Here’s the mob outside Graham’s home:

None of this is happening by accident. Alexandria Ocasio-Cortez recently urged her followers to allow this moment to “radicalize” them.

.@AOC wants to use the death of Justice Ginsburg as a means to "radicalize" people. pic.twitter.com/t4BgGNUPlF

So how did your Monday start? Stand with me against the mob: https://t.co/5iOnCoCB4e pic.twitter.com/nZzz14ngr0

We're here with your wake up call @LindseyGrahamSC RBG's seat will be filled after the election pic.twitter.com/0WIDUtbLfc

Outside @LindseyGrahamSC house in DC this morning. pic.twitter.com/KmssaCJu6F

No one in the Democratic leadership is calling for any of this to stop. The angry mob is doing their bidding.

You mean your plonkers and your clueless

notamemberofanyorganizedpolicital in reply to 2smartforlibs. | September 22, 2020 at 1:46 pm

RBG was a total fake.

Is Bill Clinton Saying that Justice Ginsburg Lied to the Senate?

“Clinton’s candid account of this conversation strikes me as rather difficult to reconcile with nominee Ginsburg’s sworn testimony to the Senate in 1993. The Senate questionnaire that Ginsburg completed included this question:

Has anyone involved in the process of selecting you as a judicial nominee (including but not limited to a member of the White House staff, the Justice Department, or the Senate or its staff) discussed with you any specific case, legal issue or question in a manner that could reasonably be interpreted as seeking any express or implied assurances concerning your position on such case, issue, or question? If so, please explain fully.

It is inappropriate, in my judgment, to seek from any nominee for judicial office assurance on how that individual would rule in a future case. That judgment was shared by those involved in the process of selecting me. No such person discussed with me any specific case, legal issue or question in a manner that could reasonably be interpreted as seeking any express or implied assurances concerning my position on such case, issue, or question.

But Clinton has just stated publicly that he did discuss Roe with her precisely in order to get the assurances he needed on her position on abortion. And he has further stated that Ginsburg “knew this perfectly well.”

In short, Clinton sure seems to be saying that Ginsburg lied to the Senate….”

Nancy Pelosi Has Some Kind of Seizure On-Air

This is so stupid. It’s only meant to piss off his neighbors. He’s not even there!

I think that by now most people are sick and tired of these antics. It’s a tactic that has lost whatever effectiveness it ever had.

If the neighbors are pissed off, it won’t be the senators they’re angry at, but the mob.

Bullies using force, violence, and intimidation. Who wouldn’t want to be ruled over by such sociopaths?

I cannot imagine being a parent of one of these protestors and actually giving them money so they can protest and not work….Even my Bernie loving nephew isn’t this nuts.

Because protesting at his Senate office doesn’t allow them to harass and bully his neighbors. After all, if they live near him they are collectively responsible for anything he does that you find objectionable. I suppose we should be happy that the mob hasn’t attempted to kill family members of politicans yet for daring to be related to them.

“Yet” it the operative caveat in your statement. Give them time. They are already threatening harm to relatives of cops as well as poor Barron just for being the son of a President they don’t like.

Why is anyone surprised. It is the cultural revolution, after all.

first state to use ranked choice for potus is not an award I am proud of..

Hobbes famously described life outside govt as: “… solitary, nasty brutish and short” as his rationale for the ulimited state: the famous Leviathan. One view of govt is a way to avoid that “war or all against all”, republican self-governmetn as a way to avoid that war, without subjigation to Hobbes’ Leviathan state.

The Goblins get to run amok without immediate retribution becsue we have agreed to forebear immediate personal retribution, to avoid that war of all against all.

In self-government we delegate particular prerogative to act, by particular means, on particular issues, for particular ends. First among them is to forstall that war of all against all, with constraining the Leviathan state a close second.

If the promise is war of all against, all, or at least against you, or us, *and* that Leviathan state, what do we have to loose, really. Even Don Vito making an offer one couldn’t refuse made an acutal offer, to one’s good, or at least no harm, if you took it.

If the game is intimidating people into giving you what you want, that’s extortion. Watch your back. Once the game is taking what you can, by force, with place, time and means of your choosing, others might start playing by those rules as well.

They really don’t understand. As one example, even police over-responding in place, time, and target are holding back unless they drive their tanks into and over every protester they can. As another, the famous Rooftop Koreans chose to constrain their fire to people doing malficia, in their neighborhoods. Their guns had way, way more range that that.

Can someone from the area let us know what the specific statutes or ordinances are in those areas where these Senators reside?

Generally the use of ‘sound amplification’ requires a permit, moving into a roadway is likewise prohibited without a permit. Trespassing varies depending on posting requirements. Additionally, protests on a sidewalk are usually allowed IF the flow doesn’t block the sidewalk and protests must keep moving; they can’t be stationary.

Moreover the rules sometimes but not always differ between residential zones and other zones.

IMO, if ‘protesters’ are violating laws or ordinances they are not peaceful. Waiting until a mob begins throwing incendiary devices at a home seems like way too much freedom of action being ceded, IMO.

Tell that Racist BLM to stick this and crank it!