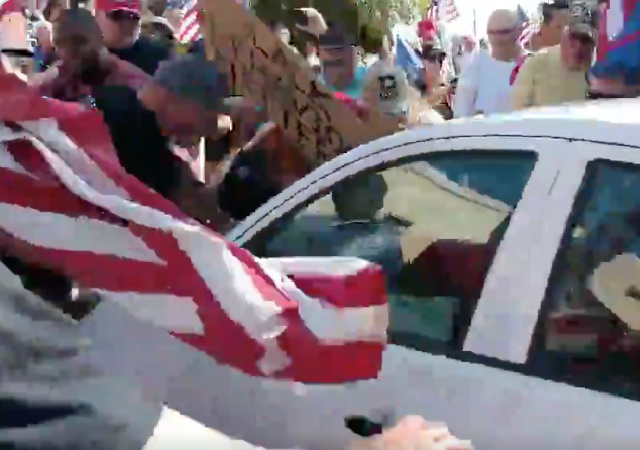 The Orange County Sheriff’s Department announced that Tatianna Ruta Turner, who allegedly plowed into a group of Trump supporters, “will be booked into the Orange County Jail for attempted murder and assault with a deadly weapon.”

#OCSDPIO Protests today in Yorba Linda resulted in two arrests and injuries to multiple people, with a vehicle driving into a crowd, striking and causing major injury to two people. The driver was arrested for attempted murder and assault with a deadly weapon. pic.twitter.com/7g5txlPf1y

The crowds dispersed fully dispersed and all roads were reopened by 4:30 p.m. We’d like to thank the many Orange County law enforcement agencies for responding to assist to our request for mutual aid today.

If any one present at the protests today has information or video you are willing to share with law enforcement, please contact Orange County Sheriff’s Department dispatch at 714-647-7000.

It turns out Turner was involved with the BLM “Caravan of Justice.”

A car just rammed through a group of Trump voters in Yorba Linda, CA. The police did catch and arrest the driver. pic.twitter.com/kLRXrZ9zsO

WTF is really going on in Yorba Linda?

The BLM protest against police violence and systemic racism began at 2 p.m. Saturday on Imperial Highway and was interrupted by a much larger group of President Donald Trump supporters, who waved American flags and held pro-Trump signs.

The Orange County Sheriff’s Department declared the demonstration an unlawful assembly at 2:40 p.m. and ordered everyone to leave the area, Sgt. Dennis Breckner said.

Tatiana Turner, a protester believed to be associated with the “Caravan of Justice” — a car-based protest in solidarity with BLM — was exiting the Yorba Linda Public Library parking lot when she allegedly drove her compact car through an intersection and struck a man and woman, according to OCSD PIO Carrie Braun.

Turner is “being held on $1 million bail and is scheduled to appear in court on Tuesday.”

However, you can see that the woman got into the car and drove through the car.

A car just drove through a crowd. The crowd then chased after the white sedan. This person was hurt. pic.twitter.com/0iAhWkcRnu

This is the car that drove through the crowd. I don’t know all the circumstances. pic.twitter.com/I7it1BzJKy

People. Do not drive through crowds. Do not get in front of cars. This isn’t hard to do.

Stay off the streets.

How come it was a white woman driving the car?

Although now that I think about it, I am assuming its a she? Could be wrong???

notamemberofanyorganizedpolicital in reply to mailman. | September 28, 2020 at 5:22 pm

And she is more than just a BLM member. She is a major Major in it.

Andy Ngô
@
A driver accused of attempted murder for driving a car into a crowd of Trump supporters in southern California and severely injuring two people has been revealed to be Tatiana Rita Turner, a major Black Lives Matter organizer.

“The Puppet Master: China
Now we have all the ingredients. Masks. Grievance and narcissism. Organization and structure. Now all that is needed is some funding and encouragement. The Chinese Communist Party (CCP), under great pressure with a collapsing economy, rising pushback against belt and road initiatives, and an American President who has run over their plans like a bulldozer, has seized on this opportunity to de-stabilize America. It’s now a race to see who can collapse whose country first….

Is she white, or a light skinned black? I wonder if she realizes that a good samaritan would have been justified in blowing her away.

Who opposed them? The Crying Boehners?

Also, anyone know if Biden has been hounded about disowning her actions yet?

I understood that the car was parked in a lot (not on the street) and people were in the lot. They didn’t move fast enough for this driver and had the wrong political beliefs so she just ran through them instead of waiting for them to finish getting out of the way. They were not mobbing the car or trying to break her windows or pull her out or anything that would suggest she was in physical danger.

the woman got into the car and drove through the car.

Where did this happen, on the Möbius Strip?

I hope all the CA haters take note that BLM was confronted by pro-Trump counter-protestors. Yorba Linda is in CA. There is lots of support for Trump here. We ARE in the majority. If only the CA GOP would offer us candidates out here. Sorry, too busy pushing RINO candidates in TX.

Then you get what we have in Arizona, which is the state GOP offering you their establishment-approved RINO.

I don’t think the GOP can legally give you a candidate under California’s current election law. The two highest vote getters in the primaries, for any party, are the only candidates on the ballot. If those two are Democrats there will be no Republican on the ballot. All analysis I’ve read says that eliminating Republicans from the ballot was the real purpose of the law.

Million dollar bail seems excessive except when you realize they have to do this to keep Kamala Harris from paying bail for these criminals.

Harris wouldn’t be paying it, her foundation (and by extension, its donors) would be paying it. So long as she can attract other people’s money there is no limit to how much bail she can pay.

“Stay off streets.” This happened in a parking lot.

Just on a style note, there’s nothing alleged about Tatianna Ruta Turner driving her car into a crowd of Trump supporters. She was arrested at the scene in the driver’s seat of the car that plowed into the crowd.

It might be said that police allege she committed attempted murder and assault with a deadly weapon. She’s charged with those crimes, but hasn’t been convicted. There’s a slim chance she could mount a defense and be acquitted.

But she did most definitely drive her car into a crowd of people.

Hum… she also tried to flee the scene although initially stopped by police. A rather short Blanco Bronco moment.

That is their goal.

Complete silence in the MSM.

That kind of leg break from an auto hitting a pedestrian has about a 5% chance of said human ending up with one or both both legs amputated below the knee. I pray that is not the case here.

Caravan of Justice, eh? I hope Tatiana will be an exemplar of justice for the next 10 to 20 years.

What will Tatiana’s Insurance Company have to say after her victims sue her?