The Republican Convention also beat the Democrat Convention in viewership when you combine television and online viewing. 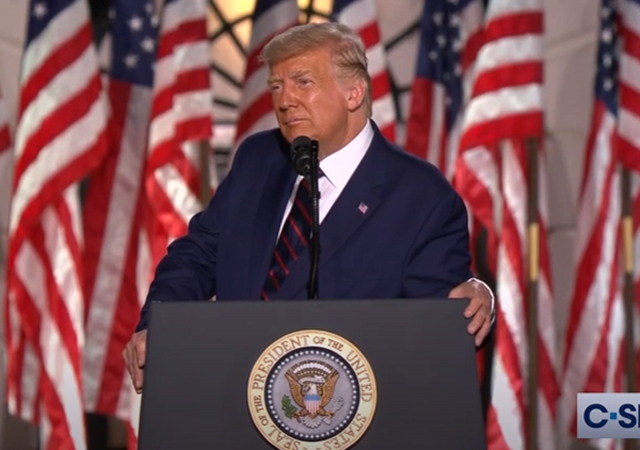 It was apparently also a hit with donors, who gave $76 million to the Trump campaign throughout the week.

The Trump campaign’s efforts exceeded those of the Biden campaign.

Last week, Democratic presidential nominee Joe Biden’s campaign announced that it, the Democratic National Committee, and their joint fundraising committees brought in $70 million in fundraising during the 4-day Democratic convention. The Biden campaign held numerous grassroots and high-dollar fundraising events throughout the week.

One other win for Trump and Republicans was in viewership. Liberal media outlets have been bragging that the Democrat Convention won in TV viewers. See the tweet below from NPR:

The RNC overall lost the TV ratings race against the DNC, according to figures from Nielsen.

Primetime viewership for each night:

However, if you add online viewership to television, the Republican Convention numbers were higher.

From the FOX News report:

Meanwhile, the Republican National Convention brought in 147.9 million total views across television and online between Monday and the end of Thursday night’s programming, according to a senior campaign official.

The DNC convention, as Fox News previously reported, had 122 million total viewers through television and online.

If you spent any time on Twitter or other social media through the week, you could tell how effective the Republican Convention was by how angry it was making various media and entertainment personalities.

Even Bill Maher, speaking to MSNBC’s Joy Reid, admitted that he is less confident now than he was a month ago. Watch:

"How much Facebook is controlled by the right wing and how much more of their stories get recirculated, I'm feeling less confident – maybe the convention bump got to me."@billmaher on Trump's RNC speech. #TheReidOut pic.twitter.com/kPjPbKtpUE

I only watched on the final evening.

I started to watch online on the RNC channel but then deliberately moved to the NYT to let them know someone was watching. The NYT live text commentary was predictably lame and dim-witted.

Scientific proof that Biden/Harris is going to win.

We’re talking about the election, why are you bringing climate change into this?

Same scientific principle. Make up data and then graph it out. You aren’t a science denier are you?

I streamed it live but was unable to watch. I then actually watched/listened to it in fast mode the next day.

Also, how many conservatives are like me and tossed the tv and the soft-core p*** it brings with it? I do not have any sort of television service. We watch DVDs, edited movies, and old shows (Addams Family, Little House, etc) streamed.

Democrats couldn’t afford high value production. They’re spending all their money on bus fare and per diem for the rent-a-mobs burning Americas cities to the ground.
The Democrats message is simple. “If you want the riots to stop vote for me.”

How much Facebook is controlled by the ‘right wing’….?

I know what he is implying with the right wing label but what planet are they on where ‘right wing’ controls anything?

Which is to say, even though it may be literally under Lefty La La Land™ control, any iota of objective reality that escapes it proves right-wing “control”.

“The Republican Convention also beat the Democrat Convention in viewership when you combine television and online viewing.”

PS: and never bring a skateboard to a gunfight…

So, per their pet counters, the mass media was only able to swing viewer counts on their agenda-venues toward their team by about 10%.

A time such as this as been ordained throughout the past four years.

Stand firm America and May God Bless America!! Go to the Polls to vote!!

Well, sure. The expectation is that both parties will put on shows about as exciting as watching paint dry. When the balloon drop at the end is the high point of a performance, you know your entertainment staff needs an imagination transplant.

But what’s different this year? PDJT, that’s what. Whatever anyone says about him, nobody can deny that he is, among other things, a showman. And a good one, maybe the best we’ve had since, say, Teddy R. To hit the sweet spot between enthusiasm and hysteria requires some serious skill. And it looks like he—and the staid old Republican party he’s dragging along behind him—hit it square on.

“And it looks like he—and the staid old Republican party he’s dragging along behind him—hit it square on.”

best description I have seen about that.