President Trump’s Brother Robert Died, and Media/Anti-Trumpers Used It As Excuse To Bash The President

President Trump’s Brother Robert Died, and Media/Anti-Trumpers Used It As Excuse To Bash The President

“The Left is fueled by hate, revenge, wrath and immaturity.” 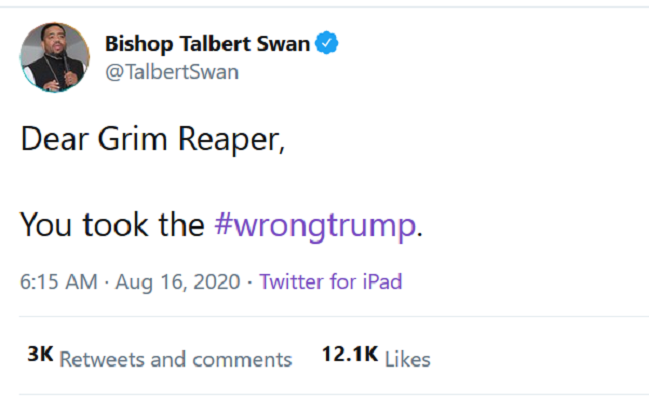 The left pretends that it is all about compassion and empathy, that it’s pure of heart and overflowing with good intentions and tolerance.  Anyone who watches them in action, though, knows better and is disgusted by them.

The latest example is the outpouring of—in the words of one Twitter user—”hate, revenge, wrath and immaturity” at the news that President Trump’s younger brother, Robert, passed away.

The “mainstream” media outlets are as foul and disgusting as we’ve come to expect.

.@anniekarni uses obit on @realDonaldTrump brother Robert to take shots at Donald. Couldn’t take a break from it even for an obituary. https://t.co/N51Z5bzH45

Wishing death or harm to someone is against Twitter TOS… unless of course you're a leftist tweeting #wrongtrump and wishing for the President's death… in that case Twitter let's it trend for more than 12 hours.

I can’t believe Twitter is allowing #wrongtrump to trend in response to Robert Trump’s passing.

This is one of their most egregious acts yet.

As of this writing, #wrongtrump is still trending on Twitter: 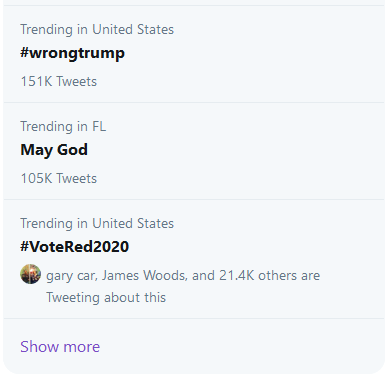 The right is pushing back, pointing out what disgusting, vile human beings many on the left are (or have become as they embrace their advanced cases of Trump Derangement Syndrome).

How is it I have not seen one #Democrat, or anyone with a blue check verified account on the liberal side, pay their respects to President @realDonaldTrump and his family? That is a demonstration of just how vile and classless they are. Very sad.

The #wrongtrump trend is heinous and heartless. However, it’s exactly why @realDonaldTrump will win once again. The Left is fueled by hate, revenge, wrath and immaturity. #MAGA

.@realDonaldTrump spots his brother Robert in the crowd. A very nice moment pic.twitter.com/Em6wnsEM6j

When liberal-leftist Democrats show you who they are believe them…the FIRST TIME! The tolerance & empathy they demand they refuse to give.

Even after the death of president Trumps brother, the Trump haters continue to hit below the belt with #wrongtrump hashtags and disrespectful rhetoric from media and liberals. pic.twitter.com/gejSG3M0Db

I'm so glad I'm not a liberal. I can't imagine having so much hate in my heart #wrongtrump

Some who dislike Trump are equally appalled by their fellow travelers’ disgusting display.

What
The
Actual
Fuck
Is
Wrong
With
Y'all??

I may not like him. I don't like either candidate, but the man just lost his last fucking brother. Shut the fuck up and reevaluate your life. You're all awful human beings

“The saying is trustworthy: If anyone aspires to the office of overseer [bishop], he desires a noble task. Therefore an overseer must be above reproach, the husband of one wife, sober-minded, self-controlled, respectable, hospitable, able to teach, not a drunkard, not violent but gentle, not quarrelsome, not a lover of money. He must manage his own household well, with all dignity keeping his children submissive, for if someone does not know how to manage his own household, how will he care for God’s church? He must not be a recent convert, or he may become puffed up with conceit and fall into the condemnation of the devil. Moreover, he must be well thought of by outsiders, so that he may not fall into disgrace, into a snare of the devil.”

Remember me as you pass by,
As you are now, so once was I,
As I am now, so you must be,
Prepare for death and follow me

Well, kinda-sorta, but this so-called bishop won’t exactly follow the President’s brother. He’ll go in the opposite direction. And it will be MUCH hotter.

AS I see things, here is a more accurate description of Mr. Swan.

At that time many will turn away from the faith and will betray and hate each other, and many false prophets will appear and deceive many people.
(Matthew 24:10-11)

If there ever was a deceiver, this man qualifies. AND hatred for others…that didn’t just arise out of the dark, and President Trump most likely isn’t the first person he’s hated. AND, I’m well familiar with COGIC churches…his denomination. As you walk into the church you will probably see a portrait of MLK hanging on the wall where all can see it…he’s their under-god, their #2 god. So yeah, divided loyalties means everything is half-hearted and mediocre. AND, just because someone calls themselves a Christian doesn’t mean they are one. You will know a tree by the fruit it bears, eh? The proof of the pudding is in it’s taste – and this tastes rancid.

Would not have expected anything different from them. Spit

Bishop of what? Some people like to give themselves titles, even if they’re not official….

True. I like to call myself Princess Fuzzy Slippers; oddly, no one else will until I “officially” put it in my Twitter.

Seriously, though, good point. Who knows who this guy is, but my guess is that he was “bishoped” by the same league of evil that “reverended” Obama’s Rev. Wright and the esteemed Rev. Jackson. I think they do it by mail.

Fuzzy-Wuzzy, I’ve always considered you a princess! I just didn’t want to embarrass you in front of the entire world! LOL

Not so obscure. From the same WP article, “The National Council of Churches ranks it as the fifth largest Christian denomination in the U.S.” Following that link:

The top 25 churches reported in the 2010 Yearbook are in order of size:

but my guess is that he was “bishoped” by the same league of evil that “reverended” Obama’s Rev. Wright and the esteemed Rev. Jackson. I think they do it by mail.

That would have been my guess too, but apparently it’s wrong. According to WP he’s a genuine bishop in the fifth largest denomination.

The rest of that WP article makes fascinating reading too. This bishop is a real piece of work.

Not a sense of compassion. Just the thought of losing my younger, and only, brother makes my eyes swell with tears.

The lack of compassion by the Left is so obvious. There can be no doubt the “caring” that is supposed to our less fortunate among us is just as shallow. Means and end to obtain control of everything. If problems are ever solved, their gravy train will stop.

It is truly amazing how petty, irrational Dems have become.

Evidently this man forgot The Lord’s words where He said we should love our neighbor as we love ourselves.

I have absolutely no respect for anyone who remains a Democrat after seeing what that party has become.