What’s a Revolution Without Some (Seriously) Old-fashioned Bible Burning? 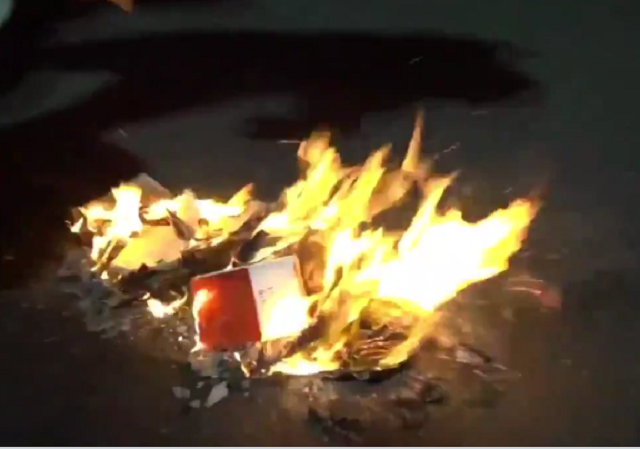 Every time I hear “progressive” these days, I kind of laugh a little inside.  Is there anything less progressive than a backwards-looking ideology that embraces the worst of the twentieth century?

Today’s “progressives” love the 1930s and the 1960s best of all, but any dated, last century communist revolutionary antic is apparently on the table.

Left-wing activists bring a stack of Bibles to burn in front of the federal courthouse in Portland. https://t.co/lYWY0x8n8P

Communists burn Bibles.  It’s what they do.

I think we are supposed to be outraged, but honestly, my outrage meter tapped out long ago, and all I see are a bunch of ridiculous, spoiled, entitled brats attempting to provoke a response with tired, silly stunts.

Excuse me if I can’t work up more than an eye roll and a yawn for this facile, ridiculously laughable Bible burning protest theater.

What is more worrying, however, is the continued attack by government officials on religious liberty:

What are they trying to prove? That they don’t like Scripture? What’s new about that?

These children, whatever their ages, don’t realize they can’t damage the Word of God by burning books. In a world where people are being actively persecuted for their Christianity, the faith is still spreading and perpetuating itself.

How very Taliban of them….
Or Nazi, pretty much all the same, these Anti-Fa….

These “progressives” ought to burn themselves up as a form of protest.

It would be something people could get together on.

Take note no Korans were injured in that protest

Not surprised. Democrats are the Party of Non Believers.

During the 2008 Dem convention, a vote was taken to remove any reference to G_d… required three attempts to be successful. Three times… now where did that also happen?

Let me know when they burn a Koran.

As John Wayne used to say, “That’ll be the day.”

I thought that was Buddy Holly : )

In 1956 Buddy Holly and his drummer Jerry Allison went to see a movie in their hometown of Lubbock, Texas. They saw “The Searchers” starring John Wayne. Wayne had a response that he used throughout the movie when someone said something he didn’t agree with: “That’ll be the day.”

As legend has it, after the movie, Holly looked at Allison and said that it sure would be nice if they could record a hit song. And Jerry replied “That’ll be the day.”

Buddy was an a completelyh different plane…

The wrong one. I bet he wished he had gotten on a completely different plane.

“Heaven and earth will pass away, but my words will never pass away.”

The fool said in his heart, “There is no God.”
He who sits in the heavens shall laugh; The Lord shall hold them in derision.

“And I say to thee: That thou art Peter; and upon this rock I will build my church, and the gates of hell shall not prevail against it”

If the gates of hell are incapable of destoying the Word, what chance does Antifa have?

1.) This is a pathetic cry for attention.
2.) Christians will react with sadness for their misguided souls rather than outrage.
3.) That a pitiful little fire–I could build a bigger fire with the bibles I have in my house. Maybe they’re harder to find in Portland.

Some church in Portland is in for a surprise the next time they hold services … “Hey! What happened to the pew Bibles?!?”

If only these fascilibro-arsonists* stopped their lust for a blazing destruction of the human spirit, expressed through art, at books.

The 19th century, German-sculpted Die Lorelei statute (see sites below for background) in The Bronx is fair game for the fascilibro-arson** squad of the Dem-Lefty-Globees’ paramilitary wing, Antifa.

Once their cultural advisers with advanced degrees get their ear, after they have the higher and more influential power they seek, Die Loelei will make it to Antifa’s Arson Agenda and management will dispatch their designated Arson Squad forthwith for Die Lorelei’s immediate defacing and ultimate destruction or removal.

The sculpture is so ripe for attack because of its whiteness, emblematic of its supremacist oppression, merely in and of itself. That’s obvious to anyone; but if it’s not to you, you’ll find out soon enough why it has to, and will be.

You really have no choice to be silent. Silence is violence.

They are lighting the way for President Trump in 2020! The Democratic party long gave up any pretense to being a party for the men and women of this country. They are the dark side of the force and that becomes clearer with every passing day. It is truly sad.

Antifa is from the gates of hell. They are driven by and supported by Satan himself. Just as communist governments have been throughout time. This will continue until Jesus returns for his saints and throw the evil one into the fiery pit for a thousand years. I am looking forward to this day and I feel sorry for these scumbags for They will have waited too late for redemption.

Kind of ironic for these imbeciles to spend their money buying Bibles and American flags to burn. They could save themselves a lot of trouble if they would just burn their own money, instead of contributing to the profits of the people who sell them this stuff.

What makes you think they paid for them?

The Democrat/Leftist/Marxists hate this country and its people and their culture. Even if you are not a Christian, if you are an American you live in a culture shaped in large part by Christianity. Thus any Leftist is going to burn Bibles as a symbolic burning of the American people.

It is the nature of the enemy and should not surprise anyone.

Bless their little hearts, already practicing for eternal life in Hell. Hehe, fire is their friend.

“What are they trying to prove? That they don’t like Scripture? ”

They’re displaying that the “tolerance” flag has been taken down as it’s served its purpose.

“Tolerance” was last decade’s tactic, used to gain tolerance of their own intolerant ideology. It’s being abandoned because they no longer perceive a need to tolerate anything or anyone they disagree with. Not now, not when they perceive they have come to possess the means to effectively suppress anyone who is not fully aligned them.

Tell me again how all this is due to systemic racism in our legal system plus police brutality.

Because of course all judges and prosecutors (including all the “self-hating” black ones, natch) hate “people of color” and all cops are brutal because if you really know what’s in the Bible that’s what you’re going to learn.

I bet they all go to combination Bible study meetings/Klan rallies together whenever they get the chance. Probably my favorite passage in the Bible is when the Apostles ask Jesus, “Rabbi, what is best in life.” And Jesus famously responded, “To crush your enemies — See them driven before you, and to hear the lamentation of their women!”

Really, that’s in there. It’s in the Gospel of Caligula.