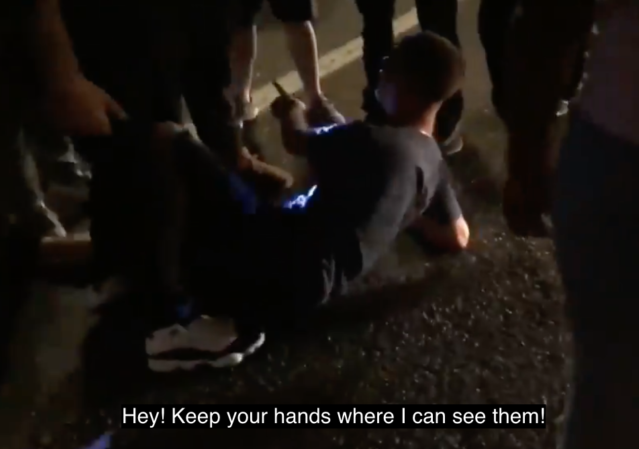 The BLM/Antifa violence in Portland, Oregon, that is being permitted—even cheered on—by state and local Democrats, is reviled by normal Americans both in Oregon and beyond.

Earlier this week, Adam Haner was brutally assaulted by BLM/antifa rioters.  One of his alleged assailants turned himself in.

BLM and Antifa rioters cannot be permitted to loot, assault, destroy, and act as lawlessly as they wish.  These are not sympathetic “peaceful protesters”; they are destructive, entitled lunatics bent on destruction, violence, division, and sowing hate.

I predict he will be out by Monday afternoon and nothing will come of this.

He’ll probably get a tryout as a kicker in the BLM/NFL.

If he is let out, I would welcome someone canceling him.

The DA has been dropping most of the charges against the rioters, which has made them think they’re invulnerable.

He says he won’t drop the charges against this suspect, but I suspect he’ll give the guy a sweet plea deal, probably reducing the sentence to probation.

The charges already on offer are about as light as you can get given the actions of the defendant. That kick to the head should have been charged as attempted murder in my opinion.

The arrest of this dirtbag means little.

Arresting a few of these thugs will not make a dent in the problem. What we need are riot police with live ammunition and orders to shoot looters and rioters.

What we need are trials, convictions and max sentences. Nothing stops these leftist snowflakes like the prospect of actual consequences. Whatever else happens, the cops are not going to start firing on the mob of rioters. Unfortunately, it’s also unlikely that the leftist scum who run Washington and Oregon will actually lock up any of their fellow rats.

Risking getting shot is not a consequence?

Meanwhile, in BEVERLY HILLS CA, these thugs are finding that Trumpers will fight back.

There is still hope. Why is this not happening in “Don’t mess with Texas!” Texas?

We need to go after the money people. Bezos and his ex-wife have given BILLIONS to them. Soros too.

Go after the billionaire funders of these crimes.

Good luck with that. These guys just testified in Congress and danced all over both parties, both of whom complained about censorship. The GOP wants censoring conservatives stopped while the Dems say they aren’t censoring them enough.

Don’t hold your breath. These guys combined have the wealth of a large country. That wealth is how they could keep the entire world opposition in court forever.

We need a much stronger approach than armies of lawyers hitting each other over the head with yellow legal pads. It will take government resolve to “cut the cord”. Right now, there is no interest at all outside of the White House to deal with this. Until we have a genuine GOP, nothing CAN happen.

I despise the concept of a “hate crime,” but this slob’s conduct certainly qualifies as such. He should be charged to the full extent under the law. The failure to apply the laws equally, regardless of race, only perpetuates our problems.

If this is a hate crime, is rape a love crime?

No. Do you seriously think rapists love their victims?

Want to get technical? Martial rape.

Sorry, gotta go there. I think you mean marital.

Same question. Do you seriously think wife-rapists love their wives?

Depends on the definition of “love.”
.

Like I said TheFineReport.com, I despise the concept of a “hate crime” but I guess this would fall under that moniker because the perpetrator viciously attacked the victim on the basis of the victim’s race. How it would follow that I believe rape is a “love crime” eludes me but it’s really not worth my effort to decipher stupid gibberish.

So, what do you have to do to earn felony assault in the first degree?

So, are those common police claims that a “shod foot” is a “dangerous weapon” now out of fashion?

If he’s released, he needs finding, and stringing up on a lamp post. And, I’m serious.

I’m inclined to agree with you. A few of these thugs suddenly appearing on various lampposts around Portland and Seattle might tend to settle the atmosphere considerably. But, of course, that would be wrong.

How about his head on a pike! Or maybe , more humanely, bring back the stock in the town square. Except there is no town square left in Portland.

Lawful citizens don’t want vigilante justice, but if it’s the only kind they can get, they’ll take it.

Well that is some good news! Do we have an update on Mr. Haner’s condition? I haven’t seen if he’s woken up or been released from the hospital or anything on him.

If the shoe were on the other foot, for instance a White man delivering the kick to a Black man, you can bet that CNN , et al would have run this story until the election.