Polsh President Andrzej Duda: Under the agreement “our soldiers will stand shoulder to shoulder in the face of any danger, whether it threatens Poland or the US.” 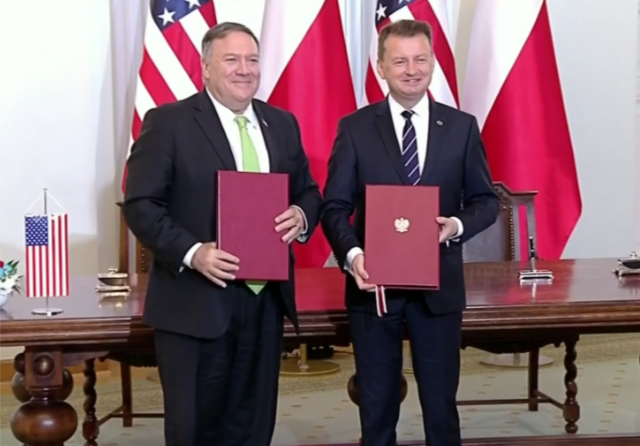 The United States and Poland have signed a landmark defense agreement on Saturday aimed at increasing U.S. troop presence in the country. Under the agreement, a thousand U.S. troops in Germany will be moved to Poland, raising their total strength to 5,500. The deal was inked by U.S. Secretary of State Mike Pompeo and Polish Defence Minister Mariusz Błaszczak in Warsaw.

According to the agreement, the headquarters of the US Army V Corps will also move from Germany to Poland. The deal “grants the US access to Polish military installations and allows for the modernization of existing facilities and capabilities in Poland,” the German broadcaster DW News reported.

The move comes after U.S. President Donald Trump last month announced the withdrawal of close to 12,000 troops from Germany. The withdrawal has angered many in Berlin, with German politicians and the mainstream media criticizing President Trump’s decision.

The Polish public broadcaster Radio Poland reported the signing of the deal:

The new Enhanced Defense Cooperation Agreement (EDCA) was inked by US Secretary of State Mike Pompeo during a visit to Warsaw.

The deal was long sought by Poland, a staunch US military ally fearful of Russia. Around 4,500 American troops are already stationed in Poland on a rotating basis.

The agreement was signed at the presidential palace in Warsaw by Pompeo and Polish Defence Minister Mariusz Błaszczak.

The deal also means that Poland will host the “forward elements” of the U.S. Army’s V Corps headquarters, US Defense Secretary Mark Esper said earlier this month, announcing that Warsaw and Washington had completed negotiations on the cooperation agreement.

The American soldiers in Poland and their base will be excluded from Polish jurisdiction, public broadcaster Polish Radio’s IAR news agency reported.

The massive troop withdrawal from Germany, cutting U.S. military presence there by a third, is in response of Berlin’s repeated defaulting on the pledge to pay its fair share to the NATO defense budget, leaving the U.S. taxpayers to shoulder the burden.

“Theyre there to protect Europe. They’re there to protect Germany, right?” President Trump asked as he announced the troop withdrawal on July 30. “Germany’s not paying for it. We don’t want to be the suckers any more. The United States has been taken advantage of for 25 years, both on trade and on the military. So we’re reducing the force because they’re not paying their bills.”

The defense agreement was signed as Poland marks the 100th anniversary of its victory over the Soviet Army in the Battle of Warsaw. Event were held across the country to mark the defeat of Russian Bolsheviks at the gates of Warsaw in 1920.

The anniversary highlights the geographic vulnerabilities faced by Poland. In recent years, Warsaw has been alarmed at the German-Russian rapprochement symbolized by the 745-mile Nord Stream pipeline that will carry natural gas from Russian fields to European supply networks.

With the Baltic Sea gas pipeline, or Nord Stream 2 as the project is known, Berlin is practically inviting Moscow to become a major player in European energy sector. The increased dependence on Vladimir Putin’s Russia will open up Europe to Moscow’s influence. Putin’s lucrative pipeline project has the backing of the German establishment. Angela Merkel’s predecessor and former German Chancellor Gerhard Schroeder has headed the $11 billion pipeline project. The pipeline is scheduled to be launched on October 1, 2022.

Poland has been among the most vocal critics of the pipeline. Polish President Andrzej Duda has repeatedly urged Germany to abandon the project that makes Europe dependent on Russia. German and Russian “jointly want to tighten the noose around our neck with the help of Nord Stream [pipeline],” former Polish Defense Minister Antoni Macierewicz noted in 2018. “They want to strangle both Poland and Central Europe, and forever make them dependent on their own economic and political power,” he cautioned.

President Trump agrees with the Polish assessment. German is “a captive to Russia” over the gas pipeline, he warned the Western allies at the 2018 NATO summit. “We’re supposed to be guarding against Russia and Germany goes out and pays billions and billions of dollars a year to Russia,” he reminded the allies at that time.

Combined with the move to position a Stryker brigade in Romania this move shores up the flanks of NATO v a Russian threat. Both allow more integration and training with the new host nations. Nations who want our presence not simply expect it.

Moving the forward HQ of V Corps is a very big deal. Shows the genuine level of commitment on the part of Poland and U.S. A Stryker brigade in the rugged terrain of Romania makes sense. They can effectively negotiate the terrain and remain a mobile deterrent to Russian activities in and around the Black Sea area.

You can add the relocation of the NATO nukes from Turkey to Poland and Germany which triggered the Russians and Turkey a few months ago. The Dardanelles aren’t as important as they were when we depended on oil imports from the Mideast.

And with the Isreal/UAE peace deal, US sanctions against Russia’s Nord Stream 2 pipeline forcing Germany to open up to Israel’s Leviathan nat/gas and Iran inadvertently blocking the Straits of Hormuz by sinking their plywood aircraft carrier, Putin is quickly losing his leverage.

This also lessens Germany’s leverage for not paying it’s NATO bills as they now much less value as a buffer against Russia invading Europe, a major factor that gave rise to the Nazis.

Turkey is more of a military threat to Europe than Russia is. They also want the Balkans and Greece back under their control, as they were during the Ottoman Empire. I’m rather surprised they never took the other half of Cyprus. Who would invade Cyprus to retake it?

What will the invincible Germans do now?

So. Three languages. Russian added to German and Turkish.

Putin can show germans how to deal with Muslims.

While he’s at it he could show Minnesota and Michigan.

Now…. Let Merkel’s Germany pay for their own defense.

They can kiss their social services programs – that WE have been indirectly paying for by paying for their defense – goodbye.

Next, move all the US Armed Forces out of Germany.

actually, I think that the idea was to post troops in Germany to protect EUROPE FROM GERMANY.

At least some of Europe needs Germany. Good and hard.

The primary reason the Germans are upset is because of the economic impact (particularly on some small towns).

The primary reason the Germans are upset is because Americans will no longer bend over.

This is pure awesome.

Answer: dead people. They will be voting for Biden.

They need to schedule some manner of celebratory parade for September 01 – the anniversary of the German / Russian invasion, and which kicked off WWII. If you recall, Obama had picked the 70th anniversary of that invasion as the date to issue his “screw you” to the Poles when he cancelled the defense agreement with them.