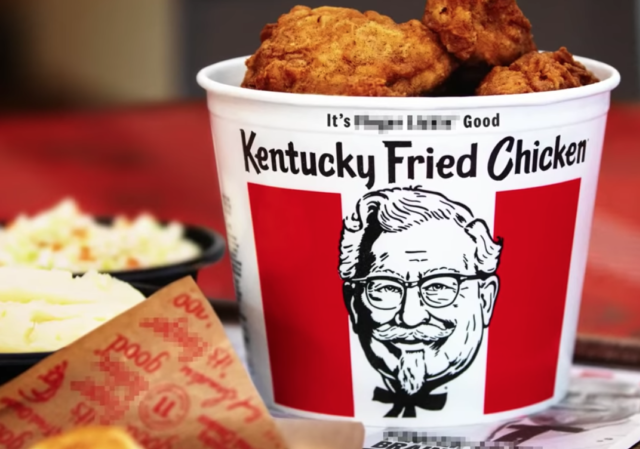 Fast food chain Kentucky Fried Chicken will drop their signature “finger lickin’ good” slogan saying the “slogan doesn’t feel quite right” during a pandemic. Instead, they’ll just go with “it’s good!” which is just lame. But they didn’t ask me.

Not to worry though, they’ll bring back the whole slogan for their devoted fans “when the time is right.”

August 24, 2020– Our It’s Finger Lickin’ Good slogan has been around for 64 years, which is impressive for a brand in this day and age. We’re firm believers that there’s one simple reason it’s become so famous: because it’s true.

Our chicken is, quite simply, Finger Lickin’ Good. Whether it’s the perfectly cooked chicken on the bone, or the secret recipe of 11 herbs and spices, we’ll never know. But the idea of even one little bit going to waste is no joke.

Think we can all agree, this year has been like no other and, right now, our slogan doesn’t feel quite right.

So, for that reason, we’ll be pressing pause on using it in our advertising, for a little while.

“We find ourselves in a unique situation—having an iconic slogan that doesn’t quite fit in the current environment. While we are pausing the use of It’s Finger Lickin’ Good, rest assured the food craved by so many people around the world isn’t changing one bit.” said Catherine Tan-Gillespie, global chief marketing officer at KFC.

In all seriousness though, whilst we’re taking a moment to have a little fun, rest assured we’re still going to be providing Finger Lickin’ Good chicken and a responsible experience for our amazing team members and guests around the world.

And for all those fans, don’t worry – the slogan will be back. Just when the time is right.

The Daily Caller noted that a recent KFC ad blurred out the “Finger Lickin'” part like it’s nudity or something.

Are there people not washing their hands and still touching their face? Because that’s gross. Don’t be that guy.

If people don’t wash their hands before eating, then the Wuhan virus is only their latest risk. Good hygiene matters. #GHM

KFC is dumber than the chickens they cook.

Kind of like Obama, a turkey having mercy on a turkey. Though, Obama is marginally smarter.

notamemberofanyorganizedpolicital in reply to JusticeDelivered. | August 25, 2020 at 5:24 pm

A turkey having mercy on a turkey? I suppose that’s possible. if the teleprompter was close enough, Obama could do it. When Trump was asked if he would pardon the turkey he said he would wait until Durham finishes his investigation.

As Barry says, this is m8nd numbingly dumb.

So it’s OK to touch food with your hands but somehow you’re in danger of the Chinese Death Kooties if you lick your fingers?

I suspect this is more of a virtue signal, ironically aimed at a group of SJW who wouldn’t form any part of KFC’S normal clientele to begin with.

Oh, Lowest Common Denominator. Is there anything you can’t ruin?

Don’t look for problems, look for opportunities. Make it “Glove lickin’ good” and they’d not only keep the poultry fan market but they might pick up a bit of the fetish market as well.

Fried chicken is actually a funny market. In my school days the closest ultra-fast food place was a MacDonald’s, though we had to walk halfway across campus to get there. There was a Church’s Fried Chicken right next door to McD’s. “The Community” seemed to live there, like Church’s was some sort of interval-ownership condo. They kept the place packed constantly. Of course that was years ago, in a less feral era, so nobody was doing much rioting, and we were left in relative peace as we poisoned ourselves with Whoppers.

McDonalds ran a lot of Mom & Pops out of business that made real burgers. Luckily there are some still around.

Surely they know that the slogan refers to licking one’s own fingers, not anyone else’s.

I thought that was Joey boy’s attitude toward his staffers.

The reason it was finger lickin good was the napkins KFC had shredded when you tried to wipe the grease off your fingers.

More likely, Bojangles is responsible for this.

The CDC changed the site on Monday. Here’s what it says now: “If you have been in close contact (within 6 feet) of a person with a COVID-19 infection for at least 15 minutes but do not have symptoms, you do not necessarily need a test unless you are a vulnerable individual or your health care provider or State or local public health officials recommend you take one.”

Those who don’t have Covid-19 symptoms and haven’t been in close contact with someone with a known infection do not need a test, the updated guidelines say.

— Sure sounds like they have given up on tracking

Has “asymptomatic transmission” of covid-19 every actually been confirmed, or is it merely assumed?

So, we’re left with a blank (but not white) bucket with some sort of food in it.

Yikes. I’m in mortal danger. I’m eating cheese curls right now, and I’ve been licking my fingers. Why isn’t there a warning on the bag???