Jack Brewer: Biden and Harris “have collectively been responsible for locking up countless Black men for nonviolent crimes”

Jack Brewer: Biden and Harris “have collectively been responsible for locking up countless Black men for nonviolent crimes”

Former NFL Player and ‘Lifelong Democrat’ rips into Democratic ticket, and defends Trump: “I’m fed up with the way [Trump’s] portrayed in the media, who refuse to acknowledge what he’s actually done for the Black community.” 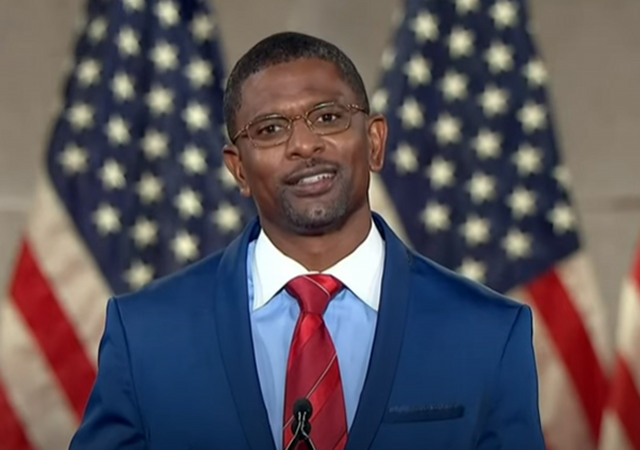 The third night of the Republican National Convention featured a wide variety of speakers, but one speech that truly stood out came from former NFL player and self-described ‘lifelong Democrat’ Jack Brewer.

Brewer addressed some of the common lies told about President Trump, and even excoriated the media for pushing misinformation.

Brewer runs an education program for prisoners and said that he has received tremendous support from Trump.

Former NFL player Jack Brewer accused the media of falsely portraying President Trump as a racist while ignoring his contributions to the Black community while speaking Wednesday night at the Republican National Convention in Charlotte.

“I know what racism looks like, I’ve seen it firsthand,” Brewer said. “America, it has no resemblance to President Trump. I’m fed up with the way he’s portrayed in the media, who refuse to acknowledge what he’s actually done for the Black community. It’s confusing the minds of our innocent children.”

Brewer is a prominent supporter of the president and member of Black Voices for Trump. He touted the president’s record on criminal justice reform, including the 2018 passage of the First Step Act, a bipartisan initiative meant to decrease the federal inmate population and cut sentences for low-level offenders.

“At some point, for the sake of our children, the policies must take priority over the personalities,” Brewer said. “So because you have an issue with President Trump’s tone, you’re going to allow Biden and Harris to deny our underserved Black and brown children school choice? Are we so offended by the president’s campaign slogan ‘Make America Great Again’ that we’re going to ignore that Joe Biden and Kamala Harris have collectively been responsible for locking up countless Black men for nonviolent crimes?”

His speech was just shy of five minutes long. Watch the whole thing below:

Lots of people were impressed:

Jack Brewer just destroyed the Biden-Harris campaign and the media's lies in under a minute.

Every American should watch this!

" I know what racism looks like, I’ve seen it first hand in America and it has no resemblance to President @realDonaldTrump "

Jack Brewer is crushing it.

"We are not as divided as our politics suggest." – insanely powerful words from Jack Brewer, a former NFL player

Jack Brewer knocks it out of the park!!!

I’m sure that it is mere coincidence that Brewer was charged with insider trading just days before his speech, just like it just happened by chance that Milli Weaver was arrested on a month old indictment the day she released her documentary, “ShadowGate”!

Not long ago I would have said that is paranoia speaking, but three years ago, I never would have imagined a Christian AG former senator from Alabama would recuse himself from defending his boss and his supporters from a phony witch hunt either.

notamemberofanyorganizedpolicital in reply to legacyrepublican. | August 27, 2020 at 9:01 pm

And all these “prosecutions” are coming out of that putrid SDNY of all places. Talk about a place that needs a total housecleaning…….

Talk about cleaning house in the Southern District Court, I believe PDJT started that effort in 2018 when he fired Preet Bharara the US Attorney of the Southern Dist. Of New York after he refused to quit.

A high profile Bharara case was prosecution of Shelly Silvers who became the medias darling when he got a conviction and a 12 yr. sentence in 2015. Based on the trials Charges and Prosecution the case went into appeals and it was only a few weeks ago where SDNY reduced the sentence to 6 yrs. Apparently the 5 yr appeals process was a credit towards the 12 which the infamous Bharara got for him and the one he has been riding the gravy train these past 5 yrs.

Have any background information on that claim?
.

NPR’s silence was deafening – but embedded in that silence was the word “TOM.” It’s the word foremost in their minds or on their lips.

Wow, he absolutely crushed it.

I got the impression he was holding back. I’d like to see him cut loose and let it roll.
.

Well, clearly there has been a complete takeover of the R party. The old guard would never actually have a position like this, or say so like this.

Hardball politics within the rules. We don’t have to cheat to make them wish they’d never started playing. We don’t need riots, fraud, voter intimidation, impeachments from nowhere or investigation paloozas.

Every claim, every ad, every election, every race, every case, every appointment, every ad, every speech with a question mark … as a wise community agitator said: “Punch back twice as hard.”

“Let me be clear…” says the black lifelong Democrat, in amspeech supporting Trump.

Somebody crafting these knows a bit about PR.