Joseph DeAngelo, former police officer, pleaded guilty to a string of rapes and murders across California between 1975 and 1986. 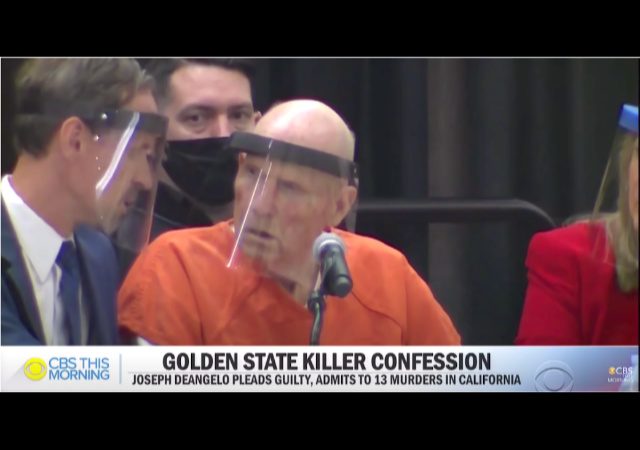 In April 2018, we reported that investigators looking into the case of the “Golden State Killer,” believed responsible for 12 murders and 51 rapes carried out throughout California during the ’70s and ’80s, had a breakthrough. New DNA testing helped lead to the identification of a 72-year old Joseph DeAngelo as a potential suspect.

DeAngelo was was sentenced Friday to 11 consecutive terms of life without parole.

DeAngelo, 74, will die in prison after he pleaded guilty in June to 13 murders and 13 rape-related charges stemming from crimes in the 1970s and ’80s under a plea deal that spares him the death penalty. He also publicly admitted to dozens more sexual assaults for which the statute of limitations had expired.

Before sentencing, he took off his face-mask and stood up to address the court.

“I’ve listened to all your statements. Each one of them,” a gaunt-looking DeAngelo said, appearing to choke up.

He took a long pause before adding, “And I’m really sorry to everyone I’ve hurt. Thank you, your Honor.”

DeAngelo also confessed to 161 other crimes, for which he couldn’t be charged because they took place outside the statute of limitations.

To finally identify and arrest him in 2018, investigators pioneered a new method of DNA tracing that involves building a family tree from publicly accessible genealogy websites to narrow the list of suspects.

They linked nearly 40-year-old DNA from crime scenes to a distant relative, and eventually to a discarded tissue they surreptitiously sneaked from DeAngelo’s garbage can in suburban Sacramento.

The same technique has since been used to solve 93 murders and rapes across the nation, said Ron Harrington, the brother of one of DeAngelo’s victims.

‘It is probably the most important (recent) advancement by law enforcement in solving cold case murders and rapes,’ he said.

The sentencing has brought some solace to Golden State Killer survivors.

Courtney Strouse’s mother was raped by DeAngelo in the 1970s, and until her death in 2016 she awoke repeatedly during the nights to check on her children and make sure all doors and windows were locked, Strouse said.

Strouse said she had learned to live in constant fear, but that Friday’s sentencing brought some relief.

“It’s nice to have the bogeyman gone,” she said. “It’s like a fable you’re told all your life about the bogeyman and now he’s gone.”

not to worry: Governor Bracero will give him a compassionate release when he replaces Gruesome Newsome…

The moral of this story is white people have no problem condemning white killers.

Any news from the trial of Robert Durst?

11 consecutive life terms. After the first 6 or 8, it just seems mean.

No Planned Perphood? He has been shown greater empathy than tens of millions who were objectively a lesser “burden”.

The simultaneously best and worst thing to come from this case was the innovative use of public DNA data banks by law enforcement to pinpoint locate him on his family tree.

The database they used has now stopped it from being used for this purpose.

Until they get slapped with a subpeona.

“Now” he is sorry. Only after caught. Several decades too late.

One has to wonder how many people he killed AFTER 1986

This is not the end of the horro, despite his admitting to another 161 crimes to humanity

I don’t suppose any of the usual Hollywood crowd will form a Free Joseph campaign like they did for Wesley Cook.

If he isn’t in solitary his lifetime sentence will probably be short.

Put him in gen pop. Save the taxpayer some money.

Not sure about that honor among thieves your pushing

He sentenced to death 13 people and unknown psychological trauma to dozens of women and California can’t put the same judgement he himself put on people.
Some lives don’t matter, his should be one of them.

Could this be used to solve the “Boy in the Box” murder? Seems like it could be. I wonder if they saved any of the child’s DNA.

Idjit. Should have said that he identifies as the wife of Bill Clinton. Would have gotten off Scott free and been given a couple hundred million tax free dollars in off shore accounts. What a dumb ass.

great that he’s off the street. however, the method used to identify him sounds suspect. it relies too much on trusting the science.how many jurors really understood the DNA science used to convict? we’ve been down this road before.
in the 80’s and 90’s there were numerous cases brought against day care providers. (e.g. mcmartin preschool) overzealous prosecutors relied on ‘experts’ to prove in court that kindly old grandmothers were abusing children. often times satanic cults were said to be running these facilities. eventually, all those convicted were released when the methods those experts used were discovered.