DNA evidence was critical in identifying Joseph James DeAngelo as a potential suspect. 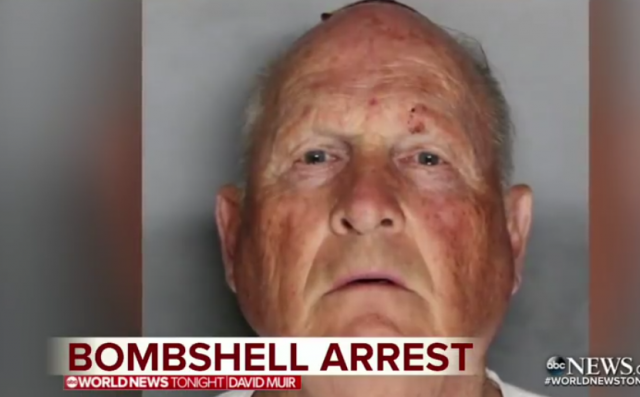 Investigators looking into the case of the “Golden State Killer”, who is believed responsible for 12 murders and 51 rapes carried out throughout California during the ’70’s and ’80’s, have had a major breakthrough after DNA testing helped lead to the identification of a potential suspect.

Joseph James DeAngelo Jr, 72, was taken into custody by the Sacramento County Sheriff’s Department on Tuesday night on two murder charges for the 1978 deaths of Brian Maggiore and his wife Katie, who are believed to be the Golden State Killer’s first murder victims.

He was later also charged with the murders of Lyman and Charlene Smith who were found dead in their home by their 12-year-old son in 1980.

Despite an outpouring of thousands of tips over the years, DeAngelo’s name had not been on the radar of law enforcement before last week.

Police say a DNA match in the past six days linked him to both crime scenes, but authorities refused to reveal what led to DeAngelo.

DeAngelo Jr has been charged by prosecutors in Sacramento, Ventura and Orange counties with eight counts of murder. He is being held without bail. The arrest took the former cop by surprise.

On Tuesday afternoon, in what Sacramento Sheriff Scott Jones called a “perfectly executed arrest,” FBI agents and detectives took DeAngelo into custody when he stepped outside his home.

“He was very surprised,” an elated Jones said Wednesday at a news conference outside the Sacramento District Attorney’s Crime Lab that helped lead to the arrest. “It looked as though he might have been searching his mind to execute a particular plan he may have had in mind…

“He was not given the opportunity. It happened almost instantaneously and he was taken into custody without any incident at all.”

It turns out that DeAngelo’s crimes inspired the state DNA-collection rules that appear to have identified him as the suspected killer.

The last known crime associated with the Original Night Stalker took place in 1986, but his notoriety persists. In 2004, California voters passed an initiative, bankrolled by the brother of one of his victims, that mandates collection of DNA samples from people convicted — or even arrested — in felony cases.

By 1978, the man had attacked victims in Oakland, Danville and Walnut Creek. In 1979, he killed two in Goleta, and two years later killed yet another couple in the Santa Barbara County town. Authorities in 2011 pinpointed DNA evidence from the killer in the 1981 slayings of Cheri Domingo, 35, and Gregory Sanchez, 27. And they matched that evidence with DNA from other crime scenes.

This is not DeAngelo’s first brush with the law, either.

Investigators believe he was committing the crimes while he was an officer.

…’We knew we were looking for a needle in a haystack, but we also knew that needle was there,’ Sacramento County District Attorney Anne Marie Schubert said. ‘We found the needle in the haystack and it was right here in Sacramento. The answer was always going to be in the DNA.’

It turns out April 25th is National DNA Day. How fitting that it is on this day that a notorious serial killer may have been caught using it.

I would like to know why and when his DNA was entered into the National DNA Database. Apparently, they ran his DNA after re-testing some of the rape kits or murder scene evidence. Game, set, MATCH.

That came to my mind as well. Would it have been as a police officer that he had his DNA taken and entered? That far back I wouldn’t have thought so. I doubt they would take for swiping a hammer.

Interesting case, I’m looking forward to the details we should find out with the trial.

They didn’t take my DNA for anything but I retired from field work in early oughts. DNA wasn’t a thing when this guy was in law enforcement. I would be very interested in where they got his DNA.

Fascinating. According to an article at the Daily Mail, the researcher who assisted in publishing a posthumous novel about the case thinks police probably searched DNA results from DNA test kits through ancestry sites to find near relatives of the criminal, and then researched their backgrounds to find the suspect.

If they narrowed the field in the way described, it was excellent detective work. I bet the perp was really surprised.

If that is true, I am feeling a bit taken-aback by the level of that invasion of privacy. Did they have to get a warrant to access the data, or did they submit the “suspect” DNA to identify close relatives? Just how open are those ancestry DNA databases?

That’s a very interesting question. According to the ads, some of the services will research their files for people who are unknown cousins. They had the killer’s DNA from rape kits. On this theory, they went to ancestry services to look for near-matches, and then researched those people’s family connections in the usual police way looking for someone who might have been the killer.

Seems this is a double edged sword. I had toyed with the idea of finding out my supposed heritage, though I have heard the results are not very reliable, that brothers and sisters have had very different results, which shouldn’t be, and far too many to pass it off as the mailman hooked up with mom.

Now hearing this, I lost any desire to do it. I wouldn’t want my DNA accessible for any reason, even with this type of good outcome. It’s bad news that this is so open like this.

Well, based on the article, you’re too late- they’ve already got you surrounded by your relatives.

Having found this suspect, they went through his trash to collect samples, and when they got a DNA match, then they watched him carefully and arrested him by surprise when he stepped out of his house.

Have you read how the police looked at him as a suspect?

This is a very strange statement.

The answer was always going to be in the DNA.’

This is another very strange statement.

Strange statements always make me suspect that a case isn’t quite the slam-dunk it’s portrayed to be.

Well the first is a suggestion he might have been ready to go out in a hail of bullets. The implication is prejudicial and I’m lending it no particular credence.

Now, if they have real proof, great. I look forward to learning about all of that when it’s presented in a court of law.

This story could have been Season 5 of Bosch!

We ca hope for a season six. Great show.

“The last known crime associated with the Original Night Stalker took place in 1986, but his notoriety persists.”

It makes me wonder why did he stop? Many, if not all, of these serial criminals get a rush or thrill from doing their evil deeds – particularly sexual assault. It’s why the recidivism rate us so high among sickos. Thirty-two years is a long time for this POS to go without a thrill.

Again according to Daily Mail reporting, the man has a terrible temper and at one point threatened to kill neighbors because their dog barked too much. He also is reported to have a degree in criminal justice and worked for police departments through 1976. Perhaps by 1986 he became aware of the advances in DNA analysis and thought he might get caught?

I was thinking along the same lines– suggests a more practical motive, rather than the popular psychology one.

Maybe it’ll come out in court that he worked on cases where the murder victims were peripherally involved, and they pissed him off?

Or, sadly more likely, there are unknown additional victims?

Serial killers can go long periods without killing, but the age he would have been in mid 80’s seems young to shut it down, despite knowing police work, it is an urge that more often than not grows and the killers get caught due to increased frequency. I wonder if he traveled and was able to hide more victims.

Assuming they do have the right man, then we’ll find out, perhaps. Police were searching’s house carefully, and I saw a photo of them in the back yard with probes of some kind.

In case anyone is still interested, police have now said they did use a DNA online site. The ones that charge (Ancestry, 123&me) insist that they had no police requests, would not respond to one, and don’t share their data. However, there is a free site where people can post their DNA information looking for relatives. Police went there and found a relative for the DNA they’d collected from rape and murder investigations. They found a relative, and then looked into whether that person had a male relative of the right age living in California at the right times, and found DeAngelo.