Jon Favreau: “She supports something extremely close to ‘Medicare for All,’ which Bernie Sanders acknowledged in his statement supporting her. She’s for the Green New Deal. She has one of the most liberal records in the U.S. Senate” 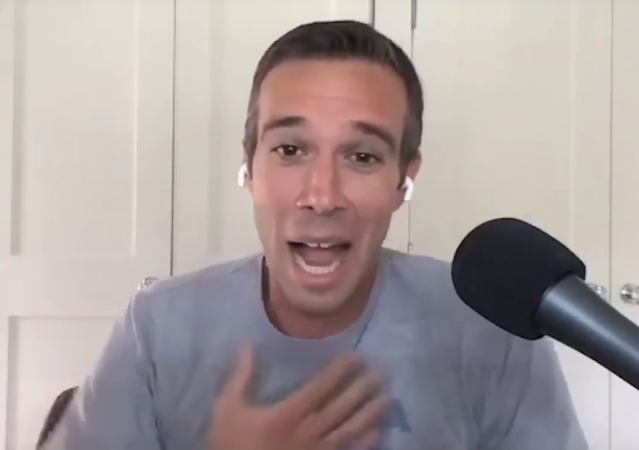 Kamala Harris is not a moderate, unless by “moderate” you mean not a commie. By every objective measure, she is on the far left of the Demcoratic Party.

Her policy history and behavior is wacky, as I documented the day Joe Biden announced she would be the Democratic VP nominee, Flashbacks to Kamala Harris’ wacky policies and behavior.

The most common claim made as to why she is “moderate” is that she was a prosecutor. True, but she was an abusive prosecutor.

Abusing power as a prosecutor does not make her moderate. It makes her dangerous.

Jon Favreau is a far left-winger and famed speechwriter for Barack Obama. He recently laughed at the attempts to make Harris appear to be a moderate. She’s no moderate, he insisted, unless the Overton Window has move so far to the extreme left that progressive are in complete control:

Former Obama speechwriter Jon Favreau mocked some media outlets for referring to Sen. Kamala Harris (D-Calif.) as a “moderate,” with the “Pod Save America” host calling the notion “hilarious.”

“It was hilarious to me that she’s being called, in all this coverage, a ‘moderate,’ like Joe Biden has found a fellow moderate or centrist. She supports something extremely close to ‘Medicare for All,’ which Bernie Sanders acknowledged in his statement supporting her. She’s for the Green New Deal. She has one of the most liberal records in the U.S. Senate,” Favreau said….

“If you want to call Kamala Harris’s record in the Senate and her policies that she’s supporting now centrist or moderate, great,” he continued. “If that’s where the Overton window has moved, then congratulations to all the progressive activists, because you have f—ing moved the shit out of that window — that supporting the Green New Deal and basically Medicare for All is now moderate and centrist. Fantastic, I’ll take it.”

.@jonfavs on Harris being called a "moderate":

"She supports something extremely close to M4A. She's for the GND. She has one of the most liberal records in the Senate…If that's where the Overton window has moved, congrats to progressive activists" pic.twitter.com/daTIkS5diQ

Could they mean she is a moderate pragmatic communist?

You know, a walking and talking oxyMORON.

notamemberofanyorganizedpolicital in reply to legacyrepublican. | August 15, 2020 at 10:44 pm

Only thing about Kamila that might be moderate is her tanning bed setting. (Ever notice she looks a lot like Prince Charles and Kamila?)

But Barrack ol’ Joe has already did it.

“Kamala Harris is not a moderate, unless by “moderate” you mean not a commie.”

Time for truth in labeling. Time to unmask hidden agendas. She is a Communist. Period.

The democrat party being completely fraudulent.

Many people (on both sides of politics) use “moderate” to mean “agrees with me but is nicer about it than I am”.

The left pushes moderate labels to fool the people who pay little to no attention to things going on, and only look to hear the word moderate to justify voting for the more extreme candidate. Obama was labeled a moderate. He was anything but moderate.

I am truly Conservative but I have friends that consider me a Leftist because I am not as far right as they are. Mostly because I am willing to at least listen and research before I take a position. We joke about it but they are serious. So I know what you mean.

BREAKING: Conservative broadcaster is being arrested for “burglary” from a SEALED grand jury indictment:

There’s more: she was about to release a documentary on Wednesday that was supposed to break stories on the obama spying scandal.

She is being held without bail – she has not been told what she has been indicted for.

The documentary she planned on releasing is called “Shadowgate”

notamemberofanyorganizedpolicital in reply to TheFineReport.com. | August 16, 2020 at 1:53 am

Is that the entire movie?

Why is it scary? And why “SEALED” in caps, as if it were not completely normal for indictments to be sealed?

Levant calls her arrest “heavy handed”, but there doesn’t seem to be anything heavy handed about it. It seems like the cops are being very nice. How would Levant have wanted her arrested?

And what makes anyone think she’s not guilty of whatever it is she’s been indicted for? Surely we should wait for some clue about the evidence before making up our minds.

Neither Harris nor Biden, or just about any Democrat, have any guiding principles these days, other than doing or saying whatever it takes to acquire power.

“…doing or saying whatever it takes to acquire power.”

That counts as a guiding principle.

In general the Screaming-D’s presumed path to.power is assembling a coalition also free of any prjnciple but power, offering them spoils taken from others.

Spoils are stuff, the joy of playing Sims with other peoples’ lives, and several flavors of self-righteousness — all presented by thugs offering to get other people what they cannot get for themselves.

It’s a strange 2-direction racket: thugs in govt use their power of position to “enact” n “enforce” stuff from which their voters get a taste in stuff, meddling n self-righteousness; the coalition of extraction throws their weight around electorially, from which figureheads n apparatcheks get their cushy sincures.

The politicritters, apparatcheks, true believers, grifters, n useful idiots all operate to make this so. Their common principlemis roughly: get what you can n it ain’t cheating if u get away with it.

That’s good for them, but the rest of us might consider where that game leaves outsiders.

notamemberofanyorganizedpolicital in reply to BierceAmbrose. | August 16, 2020 at 1:58 am

No wonder their heads (Pelosi, Schumer, Schiff, Soeharto, Soros) all look like the Jolly Roger.

Fundamentally, the progressive, Screaming-D, “rewire it all” coalition sees govt, society, n even civilization not as a commons for all — agreement, commonly held, commonly understood, commonly applied – but as a collection of rules particularly segregating one from another in use, prerogatives, n experience.

Their position is not: “It would work out pretty well for everybody, if everybody behaved lime this: do you agree?” Rather, their position is: “Do this, because we’ve decided what’s the best rebalancing of one vs another, ignoring side-effects, of course.”

The rules tbey make are for u, not them n may cost you yr whole life, but that’s Ok because yr deplorable.

From the “Kamala Harris Handbook on Succeeding in Politics”:

Rule #1: In politics, there is a vas deferens between winning and losing.

Rule #3: Never be afraid to lie down on the job.

Meanwhile, media peeps are like: “Shhhh! We are trying to polish turds to sell to a bunch of sheet eaters over here.”

Commie is her nickname.