“Cops transform schools, and in an extremely detrimental way.” 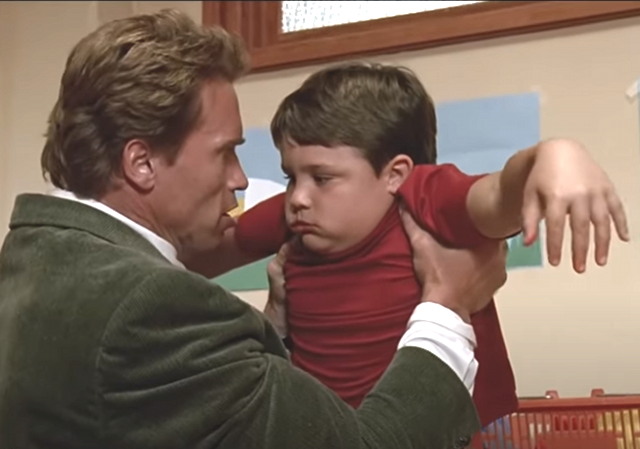 One of the amazing things about cancel culture, is the ability of its proponents to apply it to pretty much anything. In Portland, OR, a film center was planning a showing of the 1990 film ‘Kindergarten Cop’ until critics claimed the film promotes a ‘school-to-prison’ pipeline.

It was even compared to the 1915 silent film ‘The Birth of a Nation’ which portrayed the KKK in a positive light.

Kindergarten Cop Is Canceled, Likened to Birth of a Nation

It’s come to this: Kindergarten Cop, a banal 1990 comedy-action movie starring Arnold Schwarzenegger as a police detective who masquerades as a teacher, has been canceled and likened to the explicitly racist silent film Birth of a Nation.

In an email to Willamette Week, Leveen likened the Schwarzenegger vehicle to Birth of a Nation and Gone With the Wind:

It’s true Kindergarten Cop is only a movie. So are Birth of a Nation and Gone With the Wind, but we recognize films like those are not ‘good family fun.’…They are relics of how pop culture feeds racist assumptions. Because despite what the movie shows…in reality, schools don’t transform cops. Cops transform schools, and in an extremely detrimental way. 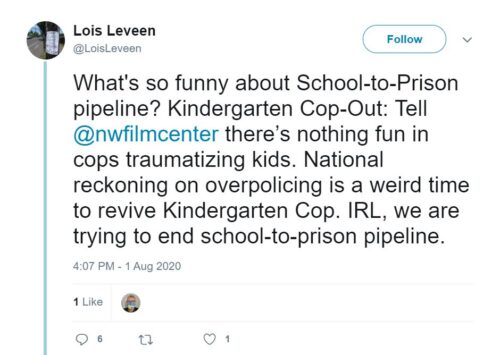 According to Nick Givas of FOX News, the film center did not make this decision based on Leveen’s tweets (account has now been protected so tweets are not publicly available):

NWFC said the tweets had nothing to do with the cancellation and instead credited “overwhelming demand” and discussions with its “staff and community members” for the change. However, their statement on Twitter was a direct reply to Leveen’s thread.

They will instead show the second screening of “Good Trouble,” the new documentary about the late Rep. John Lewis, who died last month.

Some have speculated that this famous scene from the film would also be deemed problematic today:

Hollywood has spent decades promoting the politics of the left. I sure hope they are enjoying this new age we’re living in now.

So Ahnauld’s hard left turn while Governor did not endear him to the Red Guard. Gee – who wudda thunk it?

This movie came out when my kids before they were in school.

We all really enjoyed this film!

To bad it is now banned.

It is not “banned.” Some hyper SJW threw a tantrum and people caved.

Leveen is comparing mom and dad, to law enforcement, to communists, Nazis, fascists, and other left of center regimes.

Both parents and police teach the value not being impulsive and self discipline.

They should replace it with Schwarzenegger’s movie, Junior, where he is a guy having a baby. That seems appropriate.

Ignoring the fact that Leveen in a liberal loon, she does not understand why there are police officers in US schools, from elementary to high school and beyond.

In the 1960s, there were literally no police officers in US schools at all. In the 1970s sworn police officers were beginning to be assigned to high school in tough inner-city neighborhoods which had a problem with armed gangs. Then, in the 1980s and early q990s, sworn police officers began showing up in most school districts, usually from independent police departments. Now, principals consider their schools to be their own little fiefdoms. So why would they want LEOs, from other agencies in the school at all? What changed? The school systems stopped disciplining students. The school leaders and personnel abdicated the role of disciplinarian to local law enforcement.

Most LEOs do not want to be assigned to schools. They have to deal with whiny teachers and disrespectful students. They get no support from the school and little from their agencies. They have to put up with ridiculous demands from pocket-Hitler principals. So, many of them end up being employees which their LEA would rather not have on the streets in an enforcement capacity.

In this movie a little boy explains the difference between males and females:
https://youtu.be/k96h1dYQrj0?list=PLIu61456BLiCWGdpiJAekQRMT2ziZaa1h&t=152

Today’s Liberals are surely not happy about it.

TIL: Having an underground police officer in a children’s school to protect the kiddies from a mob hit is an example of the “school -to-prison pipeline.”

These people are nucking futs.

On another note, the San Diego Union-Tribune published a story about what the “school-to-prison pipeline” really is.

Reginald Washington works with at-risk youth who are identified because they act out in school or commit crimes, and then act out so that their probation officers know it.

Washington himself never met anybody who would teach him emotional literacy, or how to use his words to avoid fighting, until after he had been sentenced to life in prison.

I translate his various insights to mean that our schools and the justice system are detecting children who are neglected and abused to the point they have no skills to bring them happiness in life. If some canny adults can intervene and teach these children a better way to live, they might grow up into competent, non-criminal, adults.

He is trying to offer the thing that saved him to younger kids.

Progressives lack the part of the brain where a sense of humor resides and thus must inflict their misery on the rest of us. Boy how this harkens back to the SNL skit “Make Joan Baez Laugh.” On a plus note, Trader Joes just said FU to the Progressives who wanted stuff renamed.

TJ’s also told “Revuns”, “coh-myoon-teh” leaders, and other troublemakers in Portland to take a hike two or three years ago. TJ’s was building a store in the north end of town. The Usual Suspects then stepped in and demanded (there’s that word again) black contractors, black this, black that, black hiring quotas, etc.

Apparently, the home office knew it would only get worse once they were committed to building the store, and worse yet once it opened. TJ’s cancelled and walked away.

The more I see of things like this, and the mega-truck article, the more I think Fidel Castro had a good idea.

That idea was, everyone, from the man-on-the-street, to the “elite”, were sent into the cane fields at harvest time. Hot, sweaty, often dangerous, and one got dirt under their fingernails.

Even the college professors and the office workers were brought down to the level of the common laborer, even if only for a few weeks. They got perspective whether they wanted it or not, or liked it or not.

Yeah, some dudes in Cambodia did that, too.
Didn’t have a good outcome.

Yeah… come to think of it… There must be SOME way to drag people into some semblance of reality. I just can’t think of a good way.

Get the hook around each of these people’s necks, and fast! please.

I’d prefer a noose, but that’d be racist.

You got my thumbs up on that, FG

Remember the gallows with 4-6… being hung all at once

It’s time for normal people to rise up and let this .2 percent of the population know we are not going to tolerate and allow their batshite crazy anymore