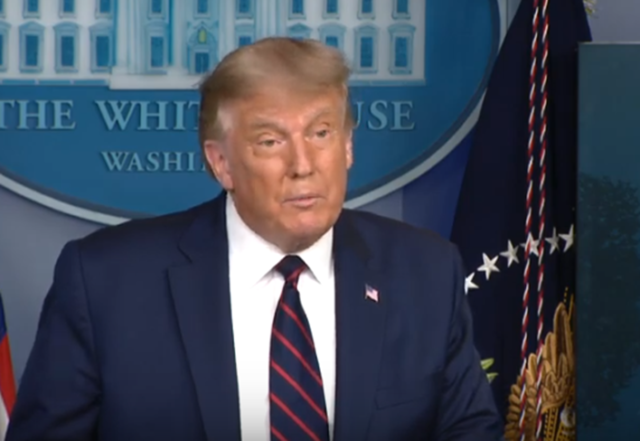 The Food and Drug Administration has just issued an emergency use authorization for convalescent plasma to treat coronavirus.

Convalescent plasma treatment utilizes the antibody-reach blood plasma of those who recovered from a infection with the Wuhan Coronavirus, as those antibodies are still capable of destroying more virus. Doctor harvest the plasma and purify it to isolate those antibodies, which are then injected into another patient sick with Covid-19.

Shortly the FDA authorization was issued, President Donald Trump announced the developments and the bacground associated with this move during a Sunday afternoon news conference.

The authorization allows convalescent plasma, which is used in an experimental treatment involving blood plasma transfusions from people who have developed antibodies to the new coronavirus, to be distributed by healthcare providers to treat people with COVID-19. Blood plasma has been used to treat other infectious diseases.

Trump cited a $48 million Mayo Clinic study that demonstrated the case fatality rate dropped by 35% for patients, and was more effective for those under 80 years old who were not on a ventilator.

The patients were treated in different ways in hospitals around the country as part of an FDA program designed to speed access to the experimental therapy. That so-called “expanded access” program tracks what happens to the recipients, but it cannot prove the plasma — and not other care they received — was the real reason for improvement.

Administration officials, in a call with reporters Sunday, discussed a benefit for patients who were within three days of admission to a hospital and were not on a respirator, and were given ‘high-titer’ convalescent plasma containing higher concentrations of antibodies. They were then compared to similar patients who were given lower-titer plasma. The findings suggest deaths were 35% lower in the high-titer group.

Azar notes that 100,000 American entrolled in the expanded access program, and 70,000 participated to provide the data used in the assessment. There was a request that those interested in donating go to coronavirus.gov and check the section on Plasma Donation.

During the press conference, Trump address a question as to whether he was placing pressure on the FDA to make the move for political reasons.

It appears that Trump wasn’t the only one worried about the speed of the FDA’s response, either.

According to two sources in the Monday meeting, Peter Navarro had aggressively confronted FDA officials, saying, "You are all Deep State and you need to get on Trump Time." Navarro declined to comment.
https://t.co/3eop6Q7FUa

In response the the reporter’s query, Trump noted that a “log jam broke last week”. He inidacted that it was his opinion the authorization was being held-up for political reasons, highlighting “Every day is lives”.

Additionally, Trump hinted at his low opinion of most media.

.@realDonaldTrump to the media:

"It's good to see you all. I hope you had a great weekend at your convention."

That assessment was shown to be warranted, given that the last question from one of the “reporters” was a nit-picking question as to whether over the difference between “siginificant development” and “promising effectiveness”.

Trump clearly intends to continue “Operation Warp Speed” at its current pace, as the administration is considering fast tracking an experimental vaccine developed in the U.K. for use in this country.

One option being explored to speed up the availability of a vaccine would involve the US Food and Drug Administration awarding “emergency use authorisation” (EUA) in October to a vaccine being developed in a partnership between AstraZeneca and Oxford university, based on the results from a relatively small UK study if it is successful, the people said.

The AstraZeneca study has enrolled 10,000 volunteers, whereas the US government’s scientific agencies have said that a vaccine would need to be studied in 30,000 people to pass the threshold for authorisation. AstraZeneca is also conducting a larger study with 30,000 volunteers, although the results from that will come after the smaller trial.

And just like that, every Leftist was promptly against yet another medical procedure that saved lives. I swear, Trump could come out in favor of breathing, and every one of these nitwits would suffocate within hours.

notamemberofanyorganizedpolicital in reply to georgfelis. | August 23, 2020 at 9:30 pm

The take away in all this is Quine and the manufactured medicines that use it knock out all flu bugs – per that 2005 study I’ve seen quoted.

“We Will Mock You”

The left’s bid to exploit the virus to defeat Trump

Confident of their ability to defeat Trump with their radical, pro–illegal alien, pro-criminal, pro-socialist agenda, the left is badly overreaching. House speaker Nancy Pelosi’s proposed $3-trillion monstrosity stimulus is a joke. The trillions they pledged under the rubric of the COVID-19 disaster is trillions more added to our national debt. The stimulus will be money printed, distributed, and spent as if it were grown on trees. Irresponsible states such as California, New York, New Jersey, and Illinois hope to use the virus to cheat the American taxpayers into rescuing them from their own profligacy.

The more they can successfully blame the virus for their own gross mishandling of their states’ funds, the more they think they can cash in on their own catastrophic governmental errors in judgment. For governors such as Gavin Newsom, Andrew Cuomo, Gretchen Whitmer, Tom Wolf, et al., the COVID-19 pandemic is a godsend, an opportunity, as so many Democrats have observed, to push for their radical socialist agenda. The longer their blue states can keep up the lockdown that is impoverishing their citizens, the more they think those same citizens will blame President Trump and vote for a Joe Biden ticket in November. Common sense is not one of the left’s intellectual strengths. Sure, there is an army of virtue-signaling bullies who scornfully chastise anyone not sufficiently social-distancing or going outside maskless, but it is precisely those “Karens,” the people who think it is the government’s job to take care of them, who are appropriately the subjects of mockery by citizens sick to death of this outrageous lockdown and the blue states’ ridiculous edicts meant to control our behavior.

One of the reasons this will work (besides the fact that the antibodies do indeed work) is that we have an increasing number of people who have recovered from COVID and a smaller number of people being infected. The logistics work in our favor: even if only 5% of the recovered people donate plasma, we should have enough to treat the hospitalized patients these days.

During the Eboli crisis in Africa, one of the nurses fell ill and on death’s doorstep… gamma globulin from a recovered patient saved her. At the time, they called this “radical” which only meant that they hadn’t kept up with past medical history…duh.

Gamma globulin has also been used during the flesh-eating epidemic and worked well. Here, the pooled globulin contained anti-bodies from predominately older people who had fought off infections before the era of abuse of antibiotics.

Since it works and Trump acknowledged it.. it must be terrible and risky.

notamemberofanyorganizedpolicital in reply to alaskabob. | August 24, 2020 at 3:55 pm

As a believer in herd immunity, I have spent many hours over the last 6 months not trying to avoid getting Covid. So guess what, I neither had antibodies at my last blood donation in July and was not covid positive after they swabbed the back of my eyeball during my recent pacemaker adventure. I am starting to question whether this virus in fact exists. As a double-digit gallon O-neg donor you would think that they would have people coughing on me continuously. So I tried to be a part of this, but apparently God has other plans for me, again.

I was negative for antibodies 9 weeks ago. Just donated again- waiting on results. If I’ve had it- it was completely asymptomatic.

I get the eyeball swab tomorrow as prep for surgery Thursday. About blood: no matter how hard I study for a blood test, the best I can get is a B+.

The FDA thinks its job is delay, even in the midst of a pandemic.

The UK vaccine is a little ahead because they were already developing a vaccine against SARS-CoV1, which has the same spike protein as SARS-CoV2.

Still, it is amazing how much US companies like Moderna have closed the gap to offer viable alternatives with newer technologies that may prove to be the future of vaccines.

Why is an expensive vaccine still being pushed instead of HCQ?

Planned Parent etc. Acknowledging the social, journolistic, and political stigma attached to HCQ and similar low cost treatments would mean they have to accept responsibility for the majority of excess deaths.

notamemberofanyorganizedpolicital in reply to randian. | August 24, 2020 at 3:56 pm

Because there are Trillions of Dollars at issue here.

Convalescent plasma treatment – and then “inject it”
a vaccine by any other name is still a vaccine!

JusticeDelivered in reply to notamemberofanyorganizedpolicital. | August 25, 2020 at 2:18 pm

This says something about the people stampeding. Their average IQ is 85, we have a group like that here. Short term gain orientation with large egos 🙂

“Get On With Your Lives!” – Oxford Professor Says “People Have Become Overly Frightened” Of COVID-19