The policy decisions by governors of New York, Pennsylvania, New Jersey, and Michigan will be under scrutiny

The U.S. Department of Justice announced it has opened a preliminary inquiry into the COVID-19 nursing home policies of New York, New Jersey, Pennsylvania, and Michigan that it says “may have resulted in the deaths of thousands of elderly nursing home residents.”

The Justice Dept. particularly honed in on Gov. Andrew Cuomo and his Health Commissioner Dr. Howard Zucker’s controversial March 25 order that required nursing homes accept recovering COVID-19 residents discharged from hospitals while barring the facilities from screening them for the killer bug.

The release even quotes from New York’s order which stated: “No resident shall be denied re-admission or admission to [a nursing home] solely based on a confirmed or suspected diagnosis of COVID-19. [Nursing homes] are prohibited from requiring a hospitalized resident who is determined medically stable to be tested for COVID-19 prior to admission or readmission.”

“This is nothing more than a transparent politicization of the Department of Justice in the middle of the Republican National Convention. It’s no coincidence the moment the Trump administration is caught weakening the CDC’s COVID-19 testing guidelines to artificially lower the number of positive cases, they launched this nakedly partisan deflection,” they wrote.

“At least 14 states — including Kentucky, Utah, and Arizona — have issued similar nursing home guidance all based on federal guidelines – and yet the four states listed in the DOJ’s request have a Democratic governor. DOJ should send a letter to CMS and CDC since the State’s advisories were modeled after their guidance,” the Democratic governors continued.

Whitmer was especially harsh in her criticism of this action, asserting that the timing is related to the then ongoing Republican National Convention.

“The fact that this letter was sent during the middle of the Republican National Convention week to four Democratic governors should make it crystal clear that this is nothing more than election year politics by an administration that is more concerned with the president’s re-election campaign than protecting Michigan seniors,” Whitmer said in a statement late Wednesday.

“We will review this letter and respond as appropriate. However, Americans would all be better served if the Trump administration stopped the partisan games and focused on delivering a real plan to defeat COVID-19.”

A glimpse of the following map summarizing the total number of COVID-19 nursing home deaths by state may provide insight as to why New York, New Jersey, and Pennsylvania were selected for scrutiny. And given Whitmer’s combative defense of her draconian state-wide measure, from which she attempted to exempt her family for a lakeside vacation, it is no wonder why her actions are getting a look-over by federal authorities. 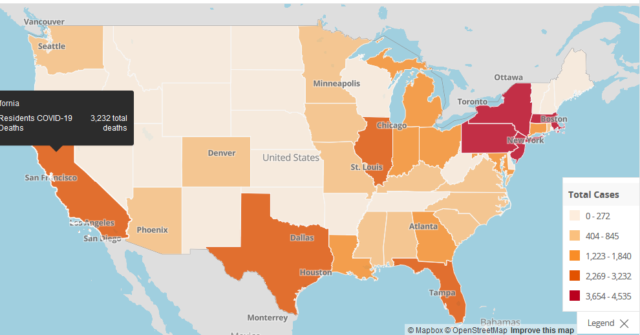 I will look forward to reviewing the DOJ findings. Hopefully, they will be released before China releases another virus.

I don’t understand the rationale for the DOJ investigating.

Obviously these states had immensely stupid and destructive policies and their governors should be shunned by all decent people. But the chances of prosecuting them for any crimes seem extremely low.

So what does the DOJ hope to accomplish other than to give the appearance of being motivated (yet again) by politics?

notamemberofanyorganizedpolicital in reply to dmacleo. | August 30, 2020 at 1:29 am

Accounting fraud…..embezzlement….just as in the universities…..

The Democrats are seriously putting Andrew Cuomo forward as the model of the perfect Covid response.

If all they do is collect the evidence and publish a report, that will be an important contribution.

(And there is apparently a federal law that applies, something about protecting the civil rights of elders in care facilities.)

I don’t care, they didn’t have any evidence against PDJT on the russian collusion bullschiff.
Put wHitler on trial and force her to spend as much time away from the job as possible. Do to her what they did to Palin and make her use personal funds for her defense.
Maybe we can get the bwitch and her cohorts recalled someday.

I have kept a log Covid-19 deaths since April in NY, Pa, NJ. 4 of the last 5 weeks NJ has removed deaths from their weekly statistics as Pa did Apr 24. Manipulating the numbers to me shows they are not on the up and up.
I hope Wolf and his health Czar get nailed if it’s proven there was negligence.

FEMA spent millions setting up field hospitals in NYC and Michigan that were virtually unused. Infected patients could have been sent there.

Bet on this: a major motivation for the next round of news distractions will be more intended to protect Gov. Cuomo-tose than to elect Biden.

The Left has tried to fight a multi-front propaganda war since 2016, intensified in the past year, and gotten sod-all for its trouble. They’ll either opt for a rear-guard action to protect Sonny or they might as well all just scream “SHOOT ME N***A!!!”

If I were family, I would want the facts

I have a friend in a NH with Alzheimer’s right now, awful situation, deteriorated quickly and her husband can’t even see her

This is abuse, clearly

Planned Parent, another wicked solution… it did force viral evolution and progressive viability, or at least remove a “burden” and safe sanctuaries.

Why on Earth doesn’t the DOJ add Massachusetts to their list of targeted states? It’d be the perfect counter to the claim that DOJ is targeting Democrat-run states, since Mass Gov. Baker is Republican. But since he’s a RINO, there’d be little for Trump’s DOJ to lose.

Both of them Denied, Denied, Denied and then Cuomo calls for an investigative internal audit by the Commissioner of DOH. WaLa!! The finding of investigating themselves is “It’s the Presidents fault” because Cuomo and Zucker did everything as they were instructed by CDC. Do not believe you lying eyes to the actual directive sent to the Directors of the Nursing Homes. Their combined findings and data compiled as a definitive report to prove their version of the Truth. Cuomo cannot call Zucker out on why he made the ruling on CDC orders because Cuomo was running the show and backed Zucker on all his decisions. Cumo over his 3 terms in office has allowed Zucker to treat nursing homes as “Garbage Dumps” by giving the For Profit nursing homes a passing grade even when many were not in compliance of meeting health care standards for safe buildings and adequate staff ratios. Even now with a Federal investigation, their finger pointing continues with assigning this as a 2020 “Republican Political Action”. In the meantime they continue with their own version of CYA rhetoric.

I am disappointed that the legit reasons my better self finds for this investigation mask the sheer, unadulterated joy my worse self wants to feel in a political, vindictive, juvenile, abusive persecution by prosecution.

Oh, it hurts? Waaaaaah. Call me in three years. BTW, nice little brother you got there. Would be a shame if he died in jail after a televised 06:00 SWATting. At least he’s used to being on CNN.

notamemberofanyorganizedpolicital in reply to BierceAmbrose. | August 30, 2020 at 1:30 am

I deliver Meals on Wheels. In Michigan. Some are to homes, some to apartments and seven or eight are to senior facilities–independent living.
With the latter, used to be I’d go in with my coolers, up and down the halls to my clients’ apartments, knock, go in. Kid around, ask how things are going, maybe talk to a caregiver or relative. “rations is up” got a laugh from the old vets. Put the food in the refrigerator or on the table. Talk to the staff if anything seemed off.
Now, I open my vehicle in the parking lot, get some old Walmart bags, write the room number on them and put in the listed meal items.
During all this, I’m using hand sanitizer and wearing a mask.
Take the bags to the vestibule, wave through the door to the [masked] staff that the food is in. Haven’t seen my people since March.

And to find that infected people are shoved back into this vulnerable population….hard to keep from….swearing.

Cuomo, fortunately, even looks vindictive, calculating and stupid. Still got elected. But what was the goal his vile person had in mind other than, as some have suggested, reduce future Medicaid costs.?

Ask trick questions and charge them with lying. A federal crime.

With Cuomo, you don’t need trick questions. He will lie about anything they ask.

And he will also destroy evidence. Guaranteed.

Two federal crimes he will definitely commit. Get him.

These Gov.’s handed down a death sentence to so many of our Senior Citizens, they certainly deserve the electric chair.