“I think he’s a fantastic president, I think he’s done a great job, and I think it’s my right to support him and to show my support of him” 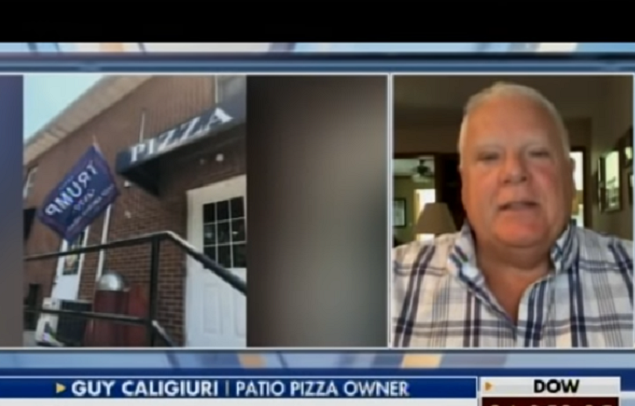 Slowly, oh so slowly it seems, we are starting to see more and more stories of pushback against the left’s insane cancel culture mobs that attack and attempt to impoverish and destroy individuals, businesses, whomever for failing to conform to their own ponderously illogical worldview.

A recent example of this welcome trend occurred in Long Island, New York and is one of my favorite stories because it involves a Trump flag, a restaurant owner refusing to be bullied by online “woke” mobs, and a community rallying to support the target of the leftist cry-bullies.  And pizza.  What’s not to love?

A Long Island pizza shop owner proudly displays an American flag at the front of his store and a Trump flag toward the back.  A random Karen was violently pummeled in the eyeballs by the horrendous sight of the Trump flag, her shriveled little soul similarly assaulted and “offended,” she shrilly—I imagine, it could have been “self-righteously” or “indignantly” or whatever—declared that she would use her Facebook platform to run the pizzeria out of business.

Presumably, only the destruction of this business would be “justice” for the pain and horror inflicted upon this sad, tiny little person who somehow cannot bear the sight of a flag honoring the duly-elected president of these United States.

But a funny thing happened on the way to her plans to throw this owner and all of his employees into poverty and social ostracism.  The community refused her call to boycott the establishment, and in fact, turned up in droves to show support not just for the pizza shop but for the president.

A Long Island, New York pizza shop owner is speaking out after he was canceled for flying a Trump flag in the back of his store.

In a Thursday interview on “Varney & Co.” with host Stuart Varney, Patio Pizza owner Guy Caligiuri explained that a woman who had come into store last Friday night to pick up an order noticed his flag and “took offense” after one of Caligiuri’s employees explained it was his.

The customer then announced that she was the administrator of a Facebook page and would post about the encounter on the social media platform with the intent of driving Patio Pizza out of business.

“I’ve been in business for 43 years and I’ve seen a lot,” said Caligiuri. “And, I just took it in stride… I just ignored it, basically.”

However, a short time later, the restauranteur recalled his phone began to ring with calls about “this woman who had posted nasty things about me online and was asking the [St. James] community to boycott Patio Pizza.”

But to Caligiuri’s surprise, on the following morning, New Yorkers from all over Long Island came to Patio Pizza, vocalizing their support for his business and for the president.

“They supported our president. They support the flag that I had hanging in the back of my store,” he recalled.

Even President Trump got in on the action and tweeted his support of this small business owner targeted by the woke mob.

In 2016, a local produce stand had a Hillary sign in the yard

Instead of yelling at them, flipping them the bird or going on social media to bitch, I simply drove on past and went to another one down the road where they didn’t advertise their politics

I remember a day when you have no idea the politics of any business you dealt with.

I never knew the politics of my teachers, but by the time I went back to school in the 70s, that had all changed.

Around primary time many stores around here have flyers in their windows, supporting some candidate or other.

Except, of course, for the gun store, assuming they had been in business for more than 20 minutes.

Got to agree with you, Fuzzy. The story has everything, and to quote the famous philosopher Daria Morgendorffer, “there is no aspect, no facet, no moment of life that can’t be improved with pizza.”

So loved, who can possibly get enough of it?

It’s all in the construction, to be sure.

notamemberofanyorganizedpolicital in reply to GatorGuy. | August 2, 2020 at 1:03 am

“violently pummeled in the eyeballs” LOL! Good one, Fuzzy!

I am still laughing..

To hear her talk, you’d think she was strapped to a stool and made to look at it while her eyelids were pinned open, Clockwork Orange style.

Add a beer and it will be perfect!

So who was this woman

Who cares? Just some idiot Karen.

Can she be sued, and if so, is she collectable? Normally, I would not advocate suing over something like this, but there needs to sued and broke, standing on a street corner begging for food, examples to stop to this crap.

To sue, one must be able to show damages.

If anything it appears her meltdown helped the business. There’s nothing to sue for.

I’d be satisfied if every pizza she ordered from now on was delivered with pineapple on it.

It’s the young versus the older people.

The young in this country are such slaves to fashion they are pushing to enslave themselves.

The young have never been such poison to a nation.

Oh noes. Now the ethics karens will be after him for using his position to make a commercial endorsement, in violation of 5 CFR § 2635.702 (c).

Besides, how does he know the pizza’s any good? Suppose it sucks, and someone buys it in reliance on the President’s endorsement. Is he liable?

Pizza is exactly what you make it. If it sucks, it’s your own fault for ordering the wrong thing.

You’ve never had bad pizza? Not the toppings, but the pizza itself?

I was served one with gooey dough once.

I certainly have! We have a chain here in the South called Mellow Mushroom. If you want soggy, undercooked crust and horrid sauce, MM is the place to go. They are consistently bad.

I had a MM pizza once and wasn’t impressed. The crust was undercooked and the toppings overcooked. Not impressed.
.

Milhouse: the kind of person only a mother could love.

Are you the one with the kneejerk downvote habit? If so, you need to get a life.
.

He’s been there 43 years, must be doing something right.

Besides, how does he know the pizza’s any good?

A good manager delegates these things.

So, they’ll flail on this all they want. Along with the redundant, n not very compelling “ethics” message, they’ll promote;
– Trump supporters are getting harassed n cancelled. (You people are hoddible. Also, screw you, I’m doing whatever you don’t want, just to spite you.)
– Trump sticks up for “his people.”
– The Karen Commandos are leagalistic, nit-picky weenies; also unpleasant n unattractive.

This guy got elected the first time on unintentional in-kind contributions from folks who “oppose” him, n they’re gonna elect him again.

I think we are nearing the breaking point where the proverbial where the tyrants are about to suffer “the fury of the patient man”.

Free speech is a mechanism for releasing pressure. In the comforting silence of repressed voices lies bombs set to go off who knows when. This is one of those times.

I think we are nearing the breaking pointwhere the tyrants are about to suffer “the fury of the patient man”.

This Trump tweet was reported out of context, as if DJT were somehow breaking the law by promoting a business (possibly for profit.). This is the first I have heard of the real story.

For profit??? It’s not a corporation he can own shares in. I doubt he owns the building. These people are nuts.

That “Karen” needs to shut her pie hole. I’m encouraged by the fact that this incident went down on Long Island; smack dab in NY city/state territory. It appears there are a few Trump supporters ’round there. In your face, deBlasio.