It’s not just Biden’s inability to get through a softball interview that’s concerning, it’s the media’s complicity in this whole ordeal that’s so gross. 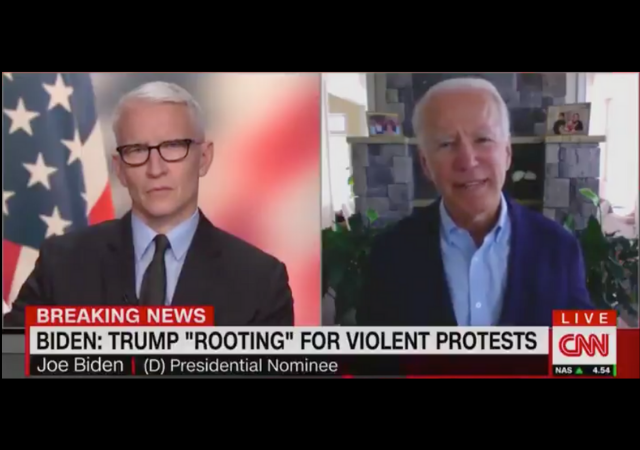 Thursday, Speaker Nancy Pelosi began laying the groundwork for Biden to back out of the presidential debates. And given Biden’s recent interview with CNN’s Anderson Cooper, it’s pretty clear why Democrats are already looking for an out.

In an interview via Skype, Biden struggled. Horribly so. Through the interview, Biden continuously looks next to the camera and is obviously reading.

Joe Biden is clearly reading from a script while struggling to get through this interview with Anderson Cooper pic.twitter.com/PsD7vBLIik

But it’s not just Biden’s inability to get through a softball interview that’s concerning, it’s the media’s complicity in this whole ordeal that’s so gross. It’s certainly not a new phenomenon but it remains awful.

This is embarrassing for @AC360 – he just sits there and covers for Biden as he reads his points and struggles. https://t.co/uQLw6IoDgW

The current campaign cycle as of last night could be viewed from so many ways. Is it the Democrat via Biden’s comment attack against black Trump supporters? Or Is it Nancy Pelosi’s sudden announcing that Biden shouldn’t demean himself by debating Trump? Or is it the progressives upholding the lefts burning of our cities and demeaning of our enforcement people and policies? Or is it about about the Democrats who are openly admitting that Trump is running the better campaign? And then there are the Jews proudly if not noisily leaving the Democrat party? Or is it all the above now that they are just now realizing that Biden’s poll numbers are as misleading now as were Hillary’s and now recognizing the real possibility that Biden almost certainly won’t make it across the finish line. If believing it has been nasty tit-for-tat campaign to date, the next 8 weeks or going to be absolutely wild. Buy Pop Corn by the 10 lb. Bags!

notamemberofanyorganizedpolicital in reply to Another Voice. | August 28, 2020 at 3:41 pm

And then there are the Jews proudly if not noisily leaving the Democrat party?

They are? Even if this is true Republican Jews are like moderate Muslims: they don’t matter politically. Jews are, shall we say, overrepresented in the highest echelons of the progressive movement that’s destroying this country.

If you get tired of pop corn you could always buy Corn Pops instead.

The ONE skill that Obama had was that he could sound eloquent when reading from his teleprompter. When speaking extemporaneously it quickly became evident that he’s a stuttering moron, but the Dims always got that tingle up their leg (and that wet stain in their shorts) when hearing him drone on and on in front of his beloved teleprompter.

But Gropey Joe’s brain is so addled by the dementia (and the drugs he’s on to keep him upright) that he can’t even read from a script.

Poor Gropey Joe, he’s GOT to find an excuse not to debate Trump, because Trump is going to eat him alive and have a good time doing it.

You fucking Dims are pathetic for nominating this dolt.

For his age, Obama was able to shoot hoops pretty well. He got that from his Dad’s side of the family.

I saw him go 2 for 22. Unbelievably, he was even better at trading for hostages.

“You didn’t build that!”
“The future must not belong to those who would slander the prophet of Islam.”
“The analogy we use here, and I think is accurate, is, just because they [ISIS] put on Lakers uniforms doesn’t make them Kobe Bryant.”

To proffer only a few choice turds of the sainted Obama’s “wisdom.” Not only is this guy stupid, but, he’s a moral reprobate.

All reasonable people can agree with what you said

Be fair. The rank-and-file Democrats didn’t nominate this dolt. This dolt was a chosen pea under a number of otherwise empty shells, all slid around cleverly by the DNC, and always made to pop up in the right place at the right time. He was the free space on the bingo card, that allowed the DNC to choose the candidate they really favored, and not until only two months before the election.

This is beyond farcical. It’s contemptible. The Dhimmi-crats have consciously nominated a man who is both ideologically and physiologically unfit to be President.

notamemberofanyorganizedpolicital in reply to guyjones. | August 28, 2020 at 3:38 pm

GatorGuy in reply to notamemberofanyorganizedpolicital. | August 28, 2020 at 6:57 pm

And now we know, Jilly’s wholly complicit in the indecent, tortious, or criminal act (depending on Delaware law, if any, on the matter).

It’s a Progressive thing, I guess. Jilly might’ve been inspired initially by Edith Wilson, our 28th and then-recently, widowed president’s trusty and helpful (2nd) wife (there are peculiar parallels, to be sure!) before she went full-bore film noir w/r/t propping up and lying pathetically about Joe’s unquestionable 6 AM-to-10 PM staying power, and the versatility, if need be, of those powerful incisors at the center of that famous Biden smile, all in the service of — what, her direct access to all the FLOTUS -related perqs, maybe?

President’s Wilson’s publicly evident, though relative, cognitive decline was no disincentive to either him or Edith prior to his insistence, and the Dem-Progressive Party’s actual reluctance, in 1916, nearing the end of his first term, to support his reelection in the Fall.

Three years later and reelected, Wilson would be relatively, if not essentially, incapacitated by a serious stroke, “leaving him paralyzed on his left side, and with only partial vision in the right eye. He was confined to bed for weeks and sequestered from everyone except his wife and his physician, Dr. Cary Grayson.

“Dr. Bert E. Park, a neurosurgeon who examined Wilson’s medical records after his death, writes that Wilson’s illness affected his personality in various ways, making him prone to ‘disorders of emotion, impaired impulse control, and defective judgment.’ Anxious to help the president recover, [Wilson’s private secretary, Joseph Patrick] Tumulty, Grayson, and the First Lady determined [secretly and improperly colluded, some might find, as to] what documents the president read and who was allowed to communicate with him. For her influence in the administration, some have described Edith Wilson as “the first female President of the United States.”

The 25th Amendment to the US Constitution was drafted and, on February 10, 1967, was adopted by the 89th Congress. The Wilson scandal, earlier in the same century, seems core to its creation.
Jilly Biden, along with key Dem-Lefty-Globee power-players, evidently don’t seem to give a donkey’s ass about the principal actions and dynamics that, among others, brought the Amendment into being.

And here we’ve been hearing endlessly from the Party of Rebellion, Jim Crow segregation and its KKK-centered enforcement wing, that “no one — not even the president — is above the law”. Go figure.

Biden is attempting to read the script….as far as his deteriorating mind will allow.
A mind is a terrible thing to waste….unfortunately his is wasted.
There is no turning back, no turning back.

notamemberofanyorganizedpolicital in reply to Groundhog Day. | August 28, 2020 at 3:38 pm

The Friendly Grizzly in reply to notamemberofanyorganizedpolicital. | August 28, 2020 at 3:55 pm

If he calls soneone a snotty-faced heap of parrot droppings, he’s done.

Biden is so far gone he doesn’t even know who he is. At the DNC Convention he came out with a big smile and said, “Hi, I’m Joe Biden’s husband.”

notamemberofanyorganizedpolicital in reply to UserP. | August 28, 2020 at 3:37 pm

Is it OK since Cooper is completely scripted also?

tom_swift in reply to notamemberofanyorganizedpolicital. | August 28, 2020 at 3:57 pm

To be fair, Cooper isn’t trying to pretend that he’s presidential material.

No, he’s pretending to be a serious journalist.

Semi-topical: are we really losing that many a DAY? Even per week that seems high.

The ‘normal’ US death rate is about 7,000 a day-last verified for 2018. Multiple databases claim about 1000 per day, but note 95% of the covid deaths are elderly with other medical problems.

Now, look at NYC, where Lord Governor Andrew effectively killed off all the old sick folk months ago. The rest of us, living in close quarters seem to have some sort of herd immunity, even if scientists can’t quite define it. There are 8 million people, and we’ve got 22 people in our hospitals (out of 60,000 beds) and 2 deaths as of last Monday. Ask Joe about that haha.

“…it’s the media’s complicity in this whole ordeal that’s so gross.”

Their complicity is their job. They are part of the Marxist insurrection.

What is disgusting is their fraud in claiming that they are “news” and then claiming protections (i.e. First Amendment) that they are clearly not entitled to due their political mission.

She said ( Jacob’s Mom ) “That not who Jacob is, he’s against violence”!

Did she tell that to Jacob’s Baby Mama who was sexually assaulted by Jacob and to the Police and citizens that Jacob had assaulted in the past?

Oh well, I guess Jacob was falsely charged each time, and it was Systemic Racism rearing its ugly head again.

Am so looking for a clean debate with no shenanigans from Basement Joe.

None from the GOP, either. Example: giving Biden Al Sharpton’s teleprompter typist.

Speaking of a clean debate reminds me how much I miss Candy Crowley.

My Mother suffers from “late onset dementia”. Joe has the same symptoms. Its quite stunning to watch his wife run him out there day in and day out. All to prevent an investigation into the Biden’s abuse of and complicity in stealing American Aid money from the Ukraine and his China issues. While Biden isn’t the only one, his family is the most visible at this time.

Jill Biden has an Edith Wilson complex. If the Communists seize power this November, one of the behind-the-scenes stories will the the Thunderdome-style cage match between Jill Biden and Kamala Harris.

Just noticed your earlier-posted, concise and witty point, with which I completely — and coincidentally — agreed, at 6:57 PM (a reply to notamember…’s “Elder Abuse”)

Joe was clearly reading but was not reading clearly.

Buck Sexton
@
It’s not fundamentally a “noble cause”

It’s about rage and power, and far too many people fell for it, again.

Caught between a Trump and a hard place. If Joe debates, he falls on his face. If he doesn’t debate, the president calls him a coward and a doddering old man, and it sticks.

If they try to be clever and send Kamala to debate for Joe, Trump has the best of both worlds. He wins a debate AND calls Biden a coward and a doddering old man, and it sticks.

This interview was a trial run for the debates. If any of those do occur, Biden’s team will be given the questions beforehand, just like Hillary’s was. So this was a test to see if Joe could deliver his scripted answers in a way that sounds spontaneous.

If they let Creepy Joe go to all the “battleground” states and talk on his own it won’t go well. It’s too late anyway as after the Kenosha episode of the riots, normal people don’t trust the Democrats on the state and local level never mind the presidency. The Democretin plans to keep the House and retake the Senate have hit the shoals, as John James’ lead in the Michigan Senate race shows.

Besides Democrats pushing this mannequin of a man in a campaign he clearly has zero legitimate place in, but it is the througrly disgusting elder abuse of Biden by leftist swamp, even his own family that is so cruel and embarrassing in America that CLAIMS to fight elder abuse and bullying.

Biden is NOT presidential, has NEVER been a leader, has done zero in his 47 year record of political life BUT be the dumb butt guy willing to step in the manure for a corrupt party and is pushed around like a mule puppet now.