“Police said he stabbed a store employee in an unprovoked attack.” 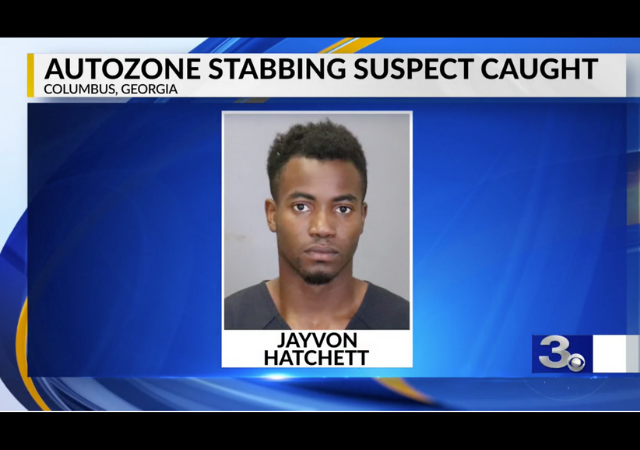 Jayvon Hatchett the suspect arrested in connection with the AutoZone stabbing which occurred August 25, was charged with aggravated assault and possession of a weapon.

In court testimony, police said Hatchett explained he “felt the need to find a white male to kill.”

The suspect in the Aug. 25 AutoZone stabbing on 32nd Street made his first appearance in court.

Jayvon Hatchett, 19, is charged with aggravated assault and possession of a weapon during the commission of a crime.

Hatchett faces these charges for a stabbing he allegedly committed on Aug. 25 around 8:36 a.m. at the AutoZone. Police said he stabbed a store employee in an unprovoked attack.

Mills told the court that when he Hatchett why he stabbed the AutoZone employee, Hatchett said he “felt the need to find a white male to kill” after watching videos of police brutality happening across the country.

notamemberofanyorganizedpolicital in reply to Tom Servo. | August 31, 2020 at 9:43 pm

frysauce in reply to notamemberofanyorganizedpolicital. | September 1, 2020 at 10:10 am

Someone needs to bury the Hatchett.

Wait; I thought that black people couldn’t be racist?!!

Part of the most racist group in America today, who while being racist claim that only whites are racist.

What I want to know is why these racists are not being prosecuted. They need to start with Zimmerman and Wilson cases. All those black lawyers suing to over Wilson being disbarred would be a good start.

Nihilism starts with people who are unconcerned with what is true and what is false. Nihilism doesn’t end that way.

Yeah, he said he was “…watching videos of police brutality happening across the country…”

But what I think he really meant was that he was watching videos of the corporate media, progressive shills and Marxist interlopers ginning up anti-American anger and riots.

When someone uses violence and the threat of violence to effect political change, what are they called? What is the customary and legal reaction to such? And should we respond with extreme prejudice when we find it on our own soil?

“And should we respond with extreme prejudice when we find it on our own soil?”

“I felt I needed to find a white male to kill.” This goes along with the latest “dog-whistle” from the bull-horn BLM revolutionary in DC the other day; “if they kill one of ours, we kill one of theirs”.

There is a warped sense of justice that has entered their souls. They think that a killing retribution for a thug who resists with the police and fights them and tries to kill them, and gets killed is justified if they kill a white person.

It’s a bastardization of the “eye-for-an-eye” law. They have no idea the true application of that Mosaic law. Because they have no idea of how to behave in civilized society. And if there could be an excuse for someone who refuses to follow the law and their own consciences, I suppose it would be; they have been weaned, reared and trained by socially retarded and morally stunted leaders; from their parents, to their teachers in government schools, to their community organizers and politicians in their tribes.

Makes me think twice about going to AutoZone anymore.

You never know when your ticket will get punched; so the most dangerous place for death is any place you are when you die and you don’t have the Lord Jesus Christ in your life as your righteousness; when you take your last breath and stand before God.

Why Autozone didn’t do this! The racist murderer in the story was out to kill the first white man he found, anywhere.

The trial will be about whether or not Hatchett gets to ride the lightening express down in Riedsville.

Maybe after 35 years of appeals, trials, documentaries. The Mike Farrels and Rob Reiners of the celebrity world will make him a hero.

How about we fast track capital appeals cases, and if they have not succeeded, at five years pull the perps plug.

Just sacrificing the individual in the wrongly perceived interest of the ‘greater good’.

If he weren’t so deplorable, they wouldn’t have to deplore him!

They are the deplorables.

I’d like blacks to pay reparations to white people to atone for their unceasing efforts to turn a pretty nice country to live in into [fill in the blank].

If Columbia, Georgia were Democrat run, him wanting to kill a white male would be considered an explicit extenuating circumstance.

I remember a first amendment case where a smut publisher put out a magazine with a blond laying next to a well endowed black man, captioned the Georgia peach. Georgia was really bent and banned the publication, the publisher sued and won.

Then that publisher got shot on the Georgia courthouse steps which crippled him.

“If I had a son, he would look like jayvon.”

notamemberofanyorganizedpolicital in reply to CKYoung. | August 31, 2020 at 9:46 pm

Because Obama would be trying to bed him.

JusticeDelivered in reply to notamemberofanyorganizedpolicital. | August 31, 2020 at 10:56 pm

Michelle Obama’s face has an uncanny resemblance to a cow.

Can someone explain to me why this true piece of work racist isn’t charged with attempted murder and a hate crime, please. They have it on video and he admitted that his victim was chosen purely because of the color of his skin. Seems to me the conviction is a slam-dunk, with only the penalty phase in question. Reverse the races of perpetrator and victim and we’d be witnessing even more riots and we all know it.

Does Georgia have a hate crime law? Because if so this should be a slam dunk case for that.

I don’t care why they execute him, as long as they get it done expeditiously.

The answer to my question is yes, Georgia does have a hate crimes law — as of two months ago. It was one of only four states without such a law, but it recently passed one and Kemp signed it on June 26.

I’m now guessing that the reason this joker hasn’t yet been charged that way is that since the law is new it isn’t on the DA’s mind, and the charge will soon be modified accordingly.

I’ll take that bet. The black guy almost never gets charged with a hate crime.

That just isn’t true. Hate crime laws have been around now for something like 30 years, and if you look at the record many black people have been charged. One might even say black people are “disproportionately” charged with hate crimes, if one were so naïve as to expect them to be charged only in proportion to their numbers.

It’s fair to assume that this idiot would be at the top of a list of candidates for U.S. Attorney General, in a Biden-Harris Administration.

A President Biden would award Hatchett the Presidential Medal of Freedom

In this current climate, I’m actually amazed that the victim wasn’t charged with battery, for clumsily launching his body onto a black man’s knife.

Of course, should anyone decide to avoid black males because of incidents like this, they will be accused of racism.

Enjoy prison for the rest of your shitty life.

Speaking of shit: take these two turds with you:

If you preach people are only being killed for their race, you will get the followers to kill only for race.
This wasn’t the first.

Put this animal down. And carry a gun, everywhere.

You know there are whites out there who will go gunning for blacks now. The thing is it’s just really easy to dispose if a black guys body. They’re seldom missed by anyone who will report them missing.

And they wonder why I carry a pistols and a rifle.

Totally man, I am about to take a LTC course. Never thought things would ever get here. We’re on our own now, either defend yourself or go down at the hands of a murdering BLM/Antifa racist.

They now think they have the right to kill whites, or rape white women without any consequences. I can predict that he will get a light sentence and be out of jail in 3-years or less. His hate won’t go away however, this won’t be his last kill…