“In a time when millions of people in the United States are looking for deep systemic solutions to our crises of mass evictions, unemployment, and lack of health care, and ​espíritu del pueblo​ and out of a love for all people, I hereby second the nomination of Senator Bernard Sanders of Vermont for president of the United States of America.” 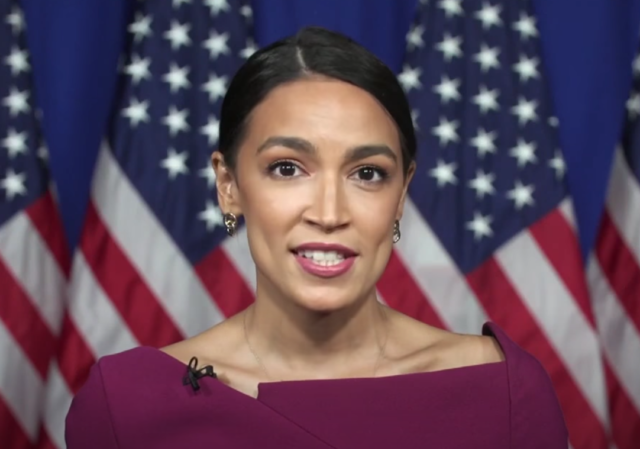 So first of all, Rep. Ocasio-Cortez spoke for over 90 seconds, but that matters far less than the fact that she used her tiny pre-recorded time slot to endorse Sen. Bernie Sanders for president over the presumptive nominee, former Vice President Biden.

AOC prattled on about living wages and healthcare for all and a people’s movement before wrapping up with an endorsement.

Good evening, ​bienvenidos​, and thank you to everyone here today endeavoring towards a better, more just future for our country and our world.

In fidelity and gratitude to a mass people’s movement working to establish 21st century social, economic, and human rights, including guaranteed health care, higher education, living wages, and labor rights for all people in the United States; a movement striving to recognize and repair the wounds of racial injustice, colonization, misogyny, and homophobia, and to propose and build reimagined systems of immigration and foreign policy that turn away from the violence and xenophobia of our past; a movement that realizes the unsustainable brutality of an economy that rewards explosive inequalities of wealth for the few at the expense of long-term stability for the many, and who organized an historic, grassroots campaign to reclaim our democracy.

In a time when millions of people in the United States are looking for deep systemic solutions to our crises of mass evictions, unemployment, and lack of health care, and ​espíritu del pueblo​ and out of a love for all people, I hereby second the nomination of Senator Bernard Sanders of Vermont for president of the United States of America.

AOC endorsed Sanders in the primary.

The congresswoman cleared the air in a tweet where she explained that it was a procedural vote and said she was asked by convention organizers to second Sanders’ nomination because he passed the delegate threshold.

Still, the only nod she made to Biden was in her tweet and not her highly-anticipated speech.

The firebrand lawmaker, 30, reluctantly pledged to support Biden in April after Sanders dropped out of the race and she was a key surrogate for the progressive candidate who she described as a mentor.

In her address, she spoke about Sanders’ movement to “repair the wounds of racial injustice, colonization, misogyny and homophobia” and not once addressed Biden, 77, who will be crowned the party’s nominee.

Supporters of the firebrand lawmaker were upset that the Bronx congresswoman had only been given a 60-second speaking slot after Republicans such as former Ohio Gov. John Kasich were feted on Monday evening.

A petition launched by progressive delegates called it “unacceptable” and argued the Democratic socialist should have been a keynote speaker.

The Biden campaign worked hard to woo the influential democratic socialist, appointing her as the co-chair of Biden’s climate change panel and engaging her in discussions about how they could be more progressive.

The Bronx-born lawmaker has been critical of Biden in the past, telling The Guardian in May last year that she’d be “hard pressed” to support him in a primary and in an interview with The New York Times in April claimed the process of uniting the party “should be uncomfortable for everyone involved.”

The Democrat old guard only have themselves to blame. This is the generation they created, raised, and fostered. The old school trained young progressives to yell louder, stamp their feet, and refuse to negotiate or employ reason or good sense. So, good luck keeping the wild socialists in check, Democrats. You own every single bit of this.

Has anyone else noted that there are more Republican leaders showing up at this DNC than will show for the RNC? In fact, just about everyone from the Bush administration is there praising the Dems. Is “W” going to make a surprise appearance too?

I’ve been saying for almost 30 years now that there is not Republican and while I haven’t been the only one, it was a brutal journey to get here. Now we are presented with a set-piece performance by all of the actors who led us down this path to globalist fascist socialism.

These are the Republicans many of us were castigated for refusing to be good “conservatives” and for “wasting” our votes by voting 3rd party. Now we are sleep-walking our way through a communist takeover even as the violence is expanding with most of our government cheering.

This is NOT a drill.

You are wasting your vote by voting third party. You are enabling the democrats. Not a single thing in your post, while true, changes that.

Then Trump studied the Venn diagrams and rode that horse to the White House while “conservatives” fought among themselves declaring everyone else to be phony “conservatives”. So now “conservativism” is as dead as “liberalism”. Pragmatism among many of us has reawakened many more to the kabuki theater stranglehold the Dem vs Rep BS had on the superficial dilettantes which kept the uniparty afloat.

And still you don’t think we made a difference? Have you learned nothing through all of this? Really? The Uniparty Kabuki Theater is now fighting it out for control in the Democrat tent while Trump re-establishes the GOP into the OTHER party that fights for constitutional liberty!

That’s the problem with Republicans, it’s never EVER the right time to the right thing. Or to do ANYTHING for that matter. There was never anything we could do but blindly vote Republican. Frogs being slowly boiled to death.

“And still you don’t think we made a difference? Have you learned nothing through all of this? Really? The Uniparty Kabuki Theater is now fighting it out for control in the Democrat tent while Trump re-establishes the GOP into the OTHER party that fights for constitutional liberty!”

You need to do it in the primaries, and vote for the party in the general.

Basically, Democrats will get a pass on everything they do, while Republicans, even Rhinos, will get hammered for at least some of the corruption they get involved in.

The Republican Party you are referring to led by “The Architect” Karl Rove, has just moved over to the Democrats and endorsed Biden.

The Republican Party you used to hold your nose for to vote for another Bush, McCain, Dole, Romney etc… is now fighting AOC (who endorsed Bernie last night) for control of the Uniparty mothership.

Do you not understand why being a knee-jerk Republican is brain-dead? Most of America is forming a new party under the old umbrella known as the GOP. The new RINO’s will be the new “centralist” Democrat Party trapped in a bloody fight with the Bernies for control.

I agree. I called it a protest vote; Utah will, of course, elect the R to any seat outside the Park City/SLC area. So I could protest the stupidity of the candidates the GOP put on my ballot.

. . . I hereby second the nomination of Senator Bernard Sanders of Vermont for president of the United States of America.

Correct me if I’m wrong but I don’t remember Sanders ever being nominated as candidate for US president. So AOC’s “second” is/was meaningless political grandstanding of the first order.

Occam’s Razor: the simple answer is usually the right one. He’s just stupid.

This is just routine. He has delegates, so some poor schmuck has to nominate him so the delegates can be given to Biden, and they all can join hands together in simulated togetherness at the end of the convention, having nominated by acclaim the worst presidential candidate they could find in the entire US.

Lucifer Morningstar: Correct me if I’m wrong but I don’t remember Sanders ever being nominated as candidate for US president. So AOC’s “second” is/was meaningless political grandstanding of the first order.

“It’s better to keep your mouth shut and let them think you are a fool than to open your mouth and confirm it to be true.” – Jesus H. Christ

Kimberlee Kaye: The Democrat old guard only have themselves to blame.

Not sure your point. The DNC asked Ocasio-Cortez to second the nomination of Sanders. There are nominations, then a vote. That’s the process.

Oddly missing from her soliloquy, any word to related to our Constitution, these were all “identity/victimhood” words.
Well, NY, you get what you vote for. How is your district doing under her watch?

Ocasio-Cortez spoke for over 90 seconds, but that matters far less

Well, it does matter if she’s supposed to speak for 60. It means she’s out of control. And for a Party which lives, eats and breathes “control”—whether Stalinist, communist, socialist, progressive, fascist, or just plain Democratic—that’s a big deal.

tom_swift: Well, it does matter if she’s supposed to speak for 60.

She spoke for 90 seconds so she’s a Stalinist?! Gee whiz. In any case, the message was prerecorded so she was obviously allowed to go a bit long.l

If the DNC didn’t like it they could have cut it, or sent it back and made her redo it in 60. Obviously they were OK with giving her 90.

She is actually staying on message as it is the Bernie policies that Biden and his “handlers” are running on. Biden is just a place holder that has no mind of his own.

You gotta give her credit: she is a moron.

Uh, he’s out. Crashed and burnned. But from what some commiecrats believe, if you click your heels together three times you can make some prople understand what an idiot your are. Might as well hive it a try. For the burnn.