“I made an awful decision. I went along with a plan to give my daughters an unfair advantage in the college admissions process and in doing so I ignored my intuition and allowed myself to be swayed from my moral compass” 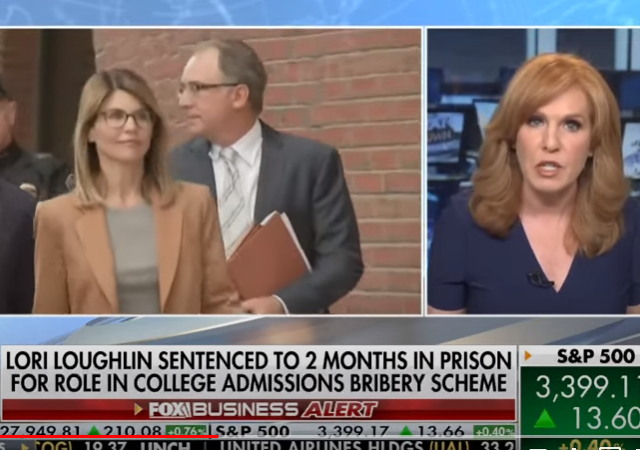 Loughlin got a sentence of two months and her husband got five months. Why even bother?

Two of the highest-profile defendants in the college admissions scandal, which exposed the rich and famous paying big bucks for scams to get their kids into the nation’s most prestigious colleges and universities, were sentenced on Friday.

Actress Lori Loughlin and her husband, fashion designer Mossimo Giannulli, were sentenced to two and five months respectively by Judge Nathaniel M. Gorton. The sentences are in line with terms of their plea deals laid out months ago.

Loughlin — who was wearing a white blouse and appeared virtually via Zoom — initially seemed calm, showing little emotion as her attorney BJ Trach said she is “profoundly sorry” for her actions. But when it was Loughlin’s turn to address the judge, she forced back tears as she apologized.

“I made an awful decision. I went along with a plan to give my daughters an unfair advantage in the college admissions process and in doing so I ignored my intuition and allowed myself to be swayed from my moral compass,” she said. “I have great faith in God, and I believe in redemption and I will do everything in my power to redeem myself and use this experience as a catalyst to do good.”

Honestly, I do not understand how what she did was legally or “morally” wrong in today’s climate. (Morals today defined as: whatever works for me; screw everyone else). She played the game that 100s of other rich and connected people play. And anyone who has had any *thinking* experience with a college knows it.

Maybe Lori Loughlin and Mossimo Giannulli’s crime was that they were insufficiently rich.

We suspect that once sufficient money is donated to the university, perhaps in the form of a new building or a permanent chair in a faculty, then the university would be pleased to admit the progeny of the donor as new students. It then becomes a simple financial arrangement and nobody has to tell lies to be admitted.

That’s a popular legal way to do it. Can be major tax benefits as well.

Good question. I’ve wondered that all along. Of the huge set of things American jurisprudence should be addressing, I’d put this pretty damn close to the bottom of the list.

A couple of phonies, who make too much money for being phoney give money to a phoney organization to enroll their phoney kids in the phony school. I don’t see the harm.

Colleges and universities serve an important credentialing role in our society. To assure fairness and to protect the reputation of the credential, people should not bribe individuals to bypass the admissions process. If a Board of Trustees makes the decision to vary from a merits-based admission policy, the Board better decide that the benefit outweighs the cost to its academic reputation. Having the tennis or crew coach make that decision based upon an personal bribe is illegal corruption.

Not that I approve of it, but why is bribery of anybody who isn’t a government official a crime? USC is a private university after all. Seems much more like a tort to me.