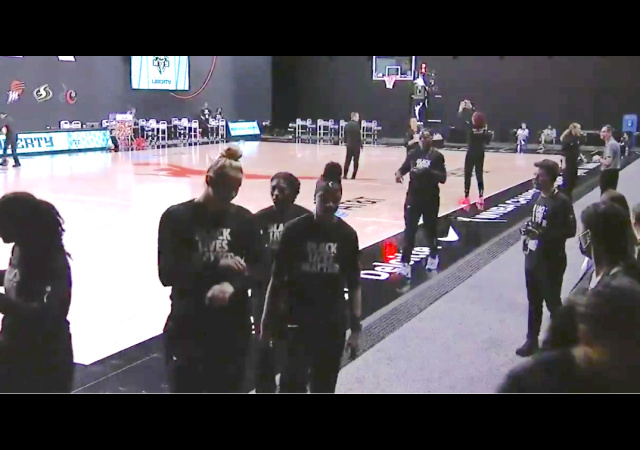 Members of the WNBA teams New York Liberty and Seattle Storm left the court before the national anthem played before their game.

Many outlets said the ladies left during the anthem based on an ESPN tweet. The network corrected itself and said they left before it played as if that makes it any better.

As the national anthem was played, the @nyliberty and @seattlestorm walked off the floor as part of the social justice initiative. pic.twitter.com/VihH5X3Yzh

Correction: Players left the court before the national anthem was played, not during. https://t.co/MdW7HtMO1P

I almost forgot the WNBA still exists. I’m not alone.

Who even watched this? Ban them off the court for good. The national anthem is for everyone in this country and to not stand for it is disrespectful

60000? Lmfao… Maybe 6 if that. Nobody watches that shit league. Nobody cares.

They have more viewers than @JoeBiden

Good thing no one was watching!

I’m hearing that three of their six viewers were offended by this move. They may have just cut their audience in half. Not smart.

These idiots think that disrespecting the national anthem will actually benefit their careers. Maybe get them a sneaker deal where poor kids pay hundreds of $$$ for a pair of sneakers made with slave labor.

Can anyone name even one WNBA player? Not much of a platform to be making speeches or values signalling from. I have a bigger audience as an individual blog troller than they have combined.

Didn’t even know a “WNBA” existed let alone be able to name one player in that league. So the players walking off the court when the national anthem played is really pointless.

well this is it for me, I’m never watching another WNBA game. Oh wait I never did watch one.

My dream is for Trump to make an Executive Order that, in honor or Transgender Rights and the Recent SCOTUS decision, that from henceforward anyone can play in a formerly “woman’s” sports league as long as they wear a blonde wig and refer to themselves as “Mary”.

Can anyone name even one WNBA player?

The only women’s basketball team worth watching are the Pistol Shrimps. VERY entertaining.

The only reason the WNBA continues to exist is because the NBA dumps a lot of $$$ into it. They market primarily to families with young kids and lesbians. One can make the argument that it’s more technically sound than what you see on an NBA court, but a bunch of variations on a layup gets boring fast (I’ve actually heard the same soundness argument when it comes to women’s soccer, but as well watching the women play is more boring).

I remember going to a Washington Capitals game a number of years ago (back before they became a top-tier team) and they were offering free season tickets for the Washington Mystics with the purchase of any type of Caps partial or full season ticket plan.

Last year the Mystics won the WNBA championship. Although the local media did its best to shower love and adulation on them the DC metro area was much more excited about the Nationals. Since most of the Mystics players had to leave town the day after they won to go play in overseas leagues it was announced their championship parade would be held in Spring, 2020. Oops.

The only female team sport that’s actually watchable is volleyball.
Especially beach volley. At least until it won’t be played by trannies.

This stunt should end any and all confusion anyone might have ever had about the thuggish WNBA. Well, actually the NBA too.

With all this thuggery how long will be be that the NBA has a commish that looks like this,

Oh well, add WNBA to the list of the unwatchables

Never watch anyway, but what a marketing screwup. Just think, if they decided to actually embrace the moment and celebrate the anthem and flag, they would have actually gained an audience

On the other hand, how many people knew the WNBA season had started until this incident happened? Free publicity.

Seriously? There’s such a thing as a WNBA? Do other people know about this? Nobody was in the stands so they walked out on nobody? If women basketball players poop on the flag and nobody sees it, does it really smell? Are the seats empty because of Covid or because nobody cares?

No to all professional sports. The owners, players, and league officials are almost all 100% anti-American.

I know there are a few decent Americans playing. Sadly, they need to exit and start the patriot leagues.

I’d loved to see the referees walk out when the players re-enter the court.
Now play between yourselves.

I am going to try to be sensitive. I grew up in Oakland. Kali. Half the chicks were black. I am not about to cut out half the population.

I can be happy with a black chick. I don’t have a fetish for black women. Women are women. They’re all dangerous.

Do they have sponsors? I do not want any of my money going to anti-American organizations like the WNBA.

Do they receive any tax breaks?

Of course they are funded,otherwise the free market results would be termed sexist , racist and homophobic.

Keep on walking, ladies. You just killed your jobs. Or you will soon.

Average pick up games are more enjoyable and better played. The women players are using a smaller ball while most are taller than average. It’s all about looking like basketball but played at several notches down . Could they just keep on walking until they found a country they liked… and never come back?

Americans aren’t tuning in to watch WNBA players or view the ads of their TV sponsors? Let’s find a culprit because clearly there’s a victim here — the players and the league, and social justice and equity demand it stop and reverse course.

At fault, and thus liable for measurable, obvious damages are:

You get the gist of the complaint held by WNBA team players, coaches, and staff, and the overall league and its sponsors:

It’s not subjectively true enough that the American fan, male, female, and other, just isn’t in to attending WNBA games and watching females attempt their relatively (compared to males’) unathletic hoop-finding talents or watching them on TV, no.

The subjective held truth is, the problem of not being dug as athletes in this respect as much as the guys’ athletics is owing to the above principally identified causes.

Accordingly, to ensure social justice and equity in this sector of American society, the WNBA will partner with the Dhimmocrat-Left-Globees to implement the following:

Periodic serum testosterone levels will be instituted for all males aged 21-59 years to assure no assay exceeds a monthly average of 400 ng/mL (about half the norm for that age-group).

Anyone not meeting this mandated standard after three (3) serial monthly serum testosterone assays will be castrated, in accordance with the fan-prospect’s prior-instituted state law.

Males of the same age-group will be required to register for Diminishing Attraction Toward the Opposite Sex (DATOS) treatment to more easily appreciate the skill set and overall attractiveness of WNBA players and coaches.

All art history courses in American colleges and universities will scrub from their curricula and course content any pictorial display and study of key anatomically oriented artists and sculptors of the male body during the aforementioned style-periods so as to de-emphasize past artistic biases toward that sex’s pronounced, albeit accurately portrayed musculature, with the accent, then and erroneously, on symmetry, proportion, and esthetics. The sculpture of Michelangelo’s David is an egregious example of this past, social injustice, and its likeness of image will be removed from texts and other audio-visual media.

This is a sampling of some of the ways in which American males will be newly oriented toward a new acceptability of the wonders and delights available to them from attending or viewing or both WNBA basketball.

We finish this note with famous words from one of the most revered thinkers in the view of our prime partner, the Gender Studies of America Society, those of Jean-Jacques Rousseau:

“I would rather be a man of paradoxes than a man of prejudices.”

We thought you might learn to appreciate that if you haven’t already.

Too bad I have never watched anything WNBA, so I can’t stop watching.

Why watch professional sports? What is the point anymore?

While setting up my Tablo device to record some over-the-air stuff, I noticed a few Canadian BB league broadcasts coming up. Who knew? The CEBL – not sure what the E stands for, unless it’s Eh! Gonna check out the Fraser Valley Bandits vs. Hamilton Honey Badgers and the Saskatchewan Rattlers vs. Edmonton Stingers.

We get some (to me) unusual programming out of Vancouver and Victoria – where I’ve found curling is quite a hoot to watch! Though they kneel a lot in that sport. 😉

Without the WNBA, where would lesbians go for dates?